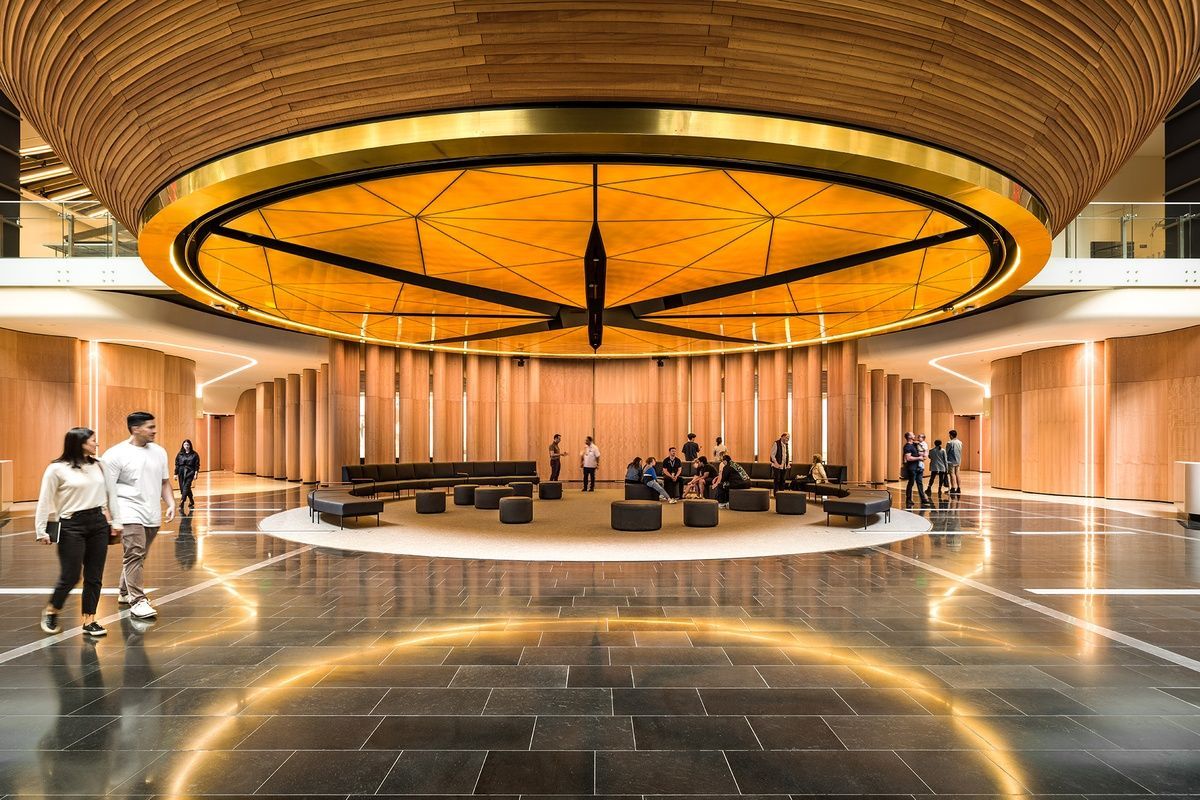 The Auckland War Memorial Museum prepares to open the doors to its South Atrium to the public this week on 3 December, after undergoing refurbishment for approximately 18 months. We took a first look inside the new space – a design collaboration between Jasmax, Design Tribe, Salmond Reed Architects and Australian firm FJMT – which museum Chief Executive Dr David Gaimster says is a fuller realisation of the original vision behind Noel Lane’s 2006 design, featuring the iconic Tanoa bowl at its core.

As you enter the Southern entrance, you’re greeted with two moving “fins” that open and close like a set of doors and feature an artwork by Ngāti Whātua artist Graham Tipene. The artwork is called Te Tatau Kaitiaki and is made of CNC-routed timber depicting two female faces. Gaimster says the works, “for the first time, give cultural dignity to the South Atrium” and that they “reinforce the fact that you have arrived at a cultural space”.

With an estimated 70 per cent of the museum’s visitors arriving to the South Atrium entrance due to the positioning of the car park, the entry needed to leave an impression. And, that it does, with a work that combines indigenous design with the modern technology of digital fabrication. In fact, the theme of connecting new with old, modern with historic, and north with south, carries throughout the interior of the new South Atrium.

The imposing, timber-clad bowl is unmissable, but we’ll come to that later. Skirting the perimeter of the semi-circular-shaped building is the retail and food and beverage offering, with the retail interiors designed by Ignite Architects and the new bistro-style restaurant by Jack McKinney. The former is lighter and brighter, featuring textured plaster walls and recycled Rimu display tables. 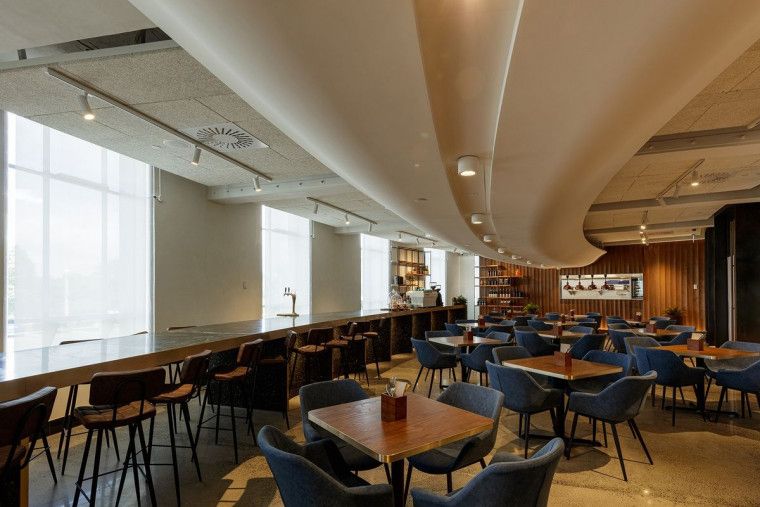 The food offering, the Tuitui Bistro & Cafe, is certainly a step up from what you’d expect of a museum cafe and features the rich textures and thoughtful details that we’ve come to expect from McKinney. Gaimster notes, “All the materiality you’re looking at follows and continues all the other material themes that we have in the museum. From the polished concrete of the 1960s to the terrazzo floors of the 1929 period, the brass details, even the wonderful fluted timber walls which replicate the great column architecture of the North entry.”

In the main foyer, the Noel Lane-designed Tanoa bowl is now revealed in all its glory. After being previously cut in half by other exhibition spaces, the fullness of the suspended dome is now seen as you enter the South Atrium. You can walk underneath the bowl, whose underside is covered with stretched Barrisol fabric and LED-backlit, making an almost stained-glass-like appearance and adding to the drastically improved acoustics of the space.

Behind the bowl, the fin structure from the entry doors is repeated, creating a perforated partition between the exhibition spaces behind. The main fins swivel to open and close, revealing the goods lift for transporting any large works for display. On these, a projection also plays. “It reflects our three mana whenua partners,” says museum Head of Major Works Chris Smith, “Ngāti Whātua Ōrākei, Waikato Tainui and Ngāti Paoa, and they’ll be projected on the ground and the fins at the back and will tell their arrival stories to Aotearoa.”

The former iteration of the atrium’s glass stair that led to the first floor has now been removed and the bowl genuinely appears to float. Though, in reality, it is supported by four ‘legs’, the back two of which feature twin artworks by Tongan artist Sopolemalama Filipe Tohi. 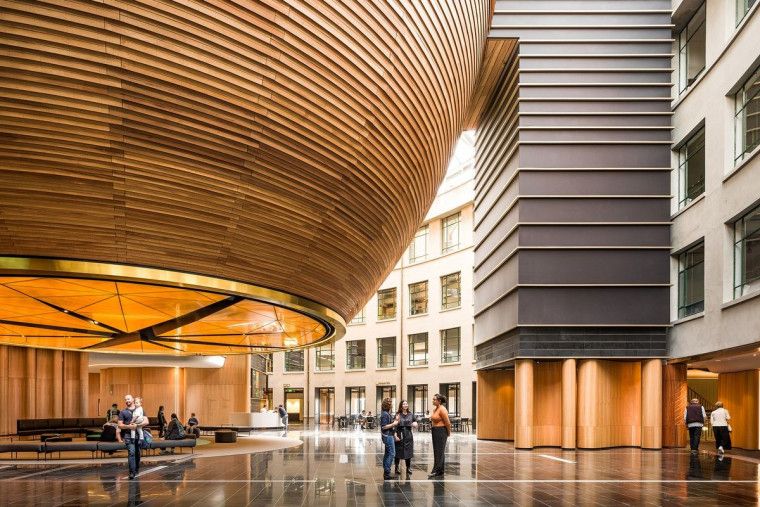 Planning for the new space has prioritised flexibility and flow. Ticketing desks can be turned into bar service for special events, exhibition rooms and auxiliary spaces are modular and able to be sectioned off for varying floor space needs. “We spent a lot of time with the architects talking about how we work. What is the public experience and how can we make it better? And, it’s been a really good creative conversation to find the right result and I’m very pleased with that,” says Gaimster.

Perhaps most importantly, two corridors on either side of the atrium lead directly to the North end of the building. Gaimster notes, “Before, the ground floor experience was a series of maze-like galleries and it was by luck that you ended up in the Māori Court.” Warmly coloured terrazzo floors, brass piping details, timber panelling on the walls and the original 1929 heritage doors in these halls continue the slightly nostalgic feel of connection to the history of the museum.

Inside the bowl, the first-floor learning spaces have also been redeveloped and are due to open early next year. For now, the South Atrium is well worth a visit: a culmination and celebration of architecture and design from its inception in 1929, to the 2006 Noel Lane and Peddle Thorp additions, to the focus on an improved user experience of today. 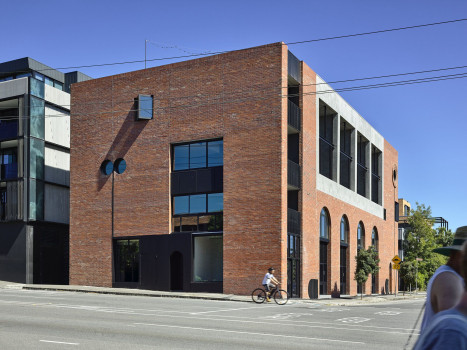 PROJECT - AUSTRALIA
5 MONTHS AGO
The Lothian Apartments
The Lothian project draws on an approach to Architecture which is being continually developed at Kennedy Nolan. 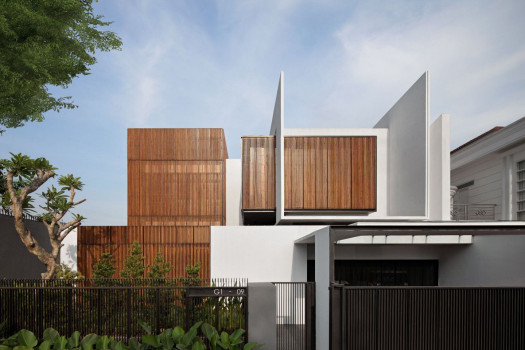 PROJECT - AUSTRALIA
11 MONTHS AGO
eben Incorporates Double Courtyards into a House for Tranquil Living in Jakarta
Of a few places one could safely retreat and relax in this pandemic time is one’s own abode. Many have since reconsidered and rethought their perspective of what an ideal home should be. Among many criteria of an ideal home expected by many homeowners today, having an inner garden or courtyard is on the top list. Completed in 2020, the Raffles House by eben is an ideal example of a house with courtyards that promotes the dwellers’ well-being in this current situation. 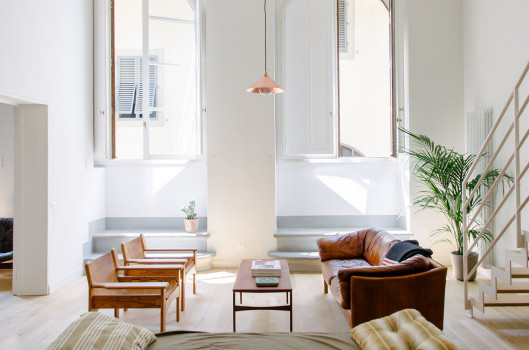 PROJECT - AUSTRALIA
4 MONTHS AGO
Numeroventi
Interior design of 3 apartments in a historic building in the centre of Florence. Clean and simple, yet warm and inviting. Numeroventi is a guesthouse and a exhibition space.