Tangata Whenua hold the knowledge, narratives and mauri of place. We understand the importance of whakapapa and that our connections to whenua are woven through intergenerational connections of people, land, sea and sky.

Acknowledging tangata whenua through embedding the legends, history, traditional knowledge, tikanga – customs and spiritual forces – forms a strong relationship to people and their place for the purpose of a better design outcome.

The Puhi Kai Iti/Cook Landing project sought to reveal narratives associated with the first navigators and explorers to arrive in New Zealand and provide a balanced representation of history in this significant place. 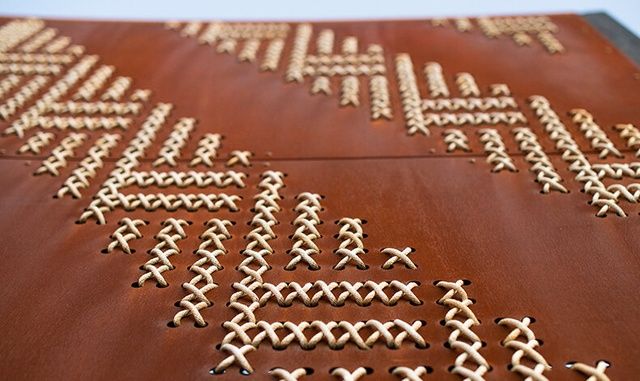 One hundred and twelve steel tukutuku panels, punched with 53,900 individual holes have been woven with 7.3km of cord by volunteers from Ngāti Oneone and DOC, Gisborne District Council and other skilled weavers from around Tairawhiti. Nick Tupara, Ngati Oneone artist and representative, developed the woven designs incorporating patterns kaokao, poutama, roimata tōroa, pātiki and patterns specific to Te Poho o Rāwiri Marae. Creating the panels was a physical challenge because of the sheer size, scale and materials of the tukutuku – steel and rope - compared to the traditional harakeke and slat board.

For decades, the only visual representation of the significance of the site was a 1906 stone monument to Captain James Cook. There was no acknowledgment of the early Polynesian navigators, led by Māia, who landed at Tawararo (Kaiti Beach) some 750 years earlier; nor of Tangata Whenua who cared for the land in the intervening time, nor indeed of Aotearoa itself.

Working closely with Nick Tupara of Ngāti Oneone, design lead Cathy Challinor of Boffa Miskell sought to reinterpret and balance the narrative, retelling the stories of the first arrivals, and reconnecting Tangata Whenua.

Cherished outcomes include Tukutuku panels, woven by local weavers using a design gifted by the local Marae. The scale and arrangement of these pieces allow visitors to arrive at the site in the way of their choosing – starting with the Polynesian navigators or the Cook story – and allow each story to hold its own space. The waita in the panels (credited to Māia) was used as an aid to navigation to Aotearoa. 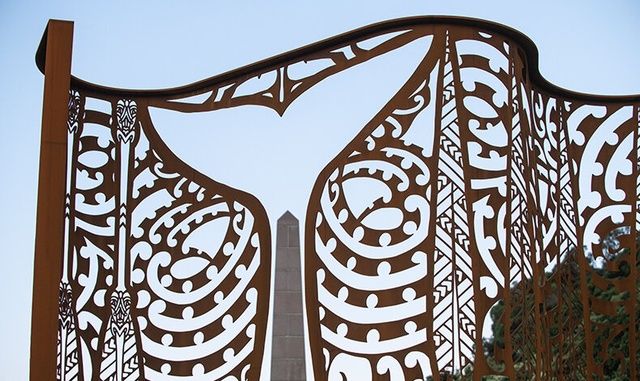 The Ikaroa sculpture is another key element of the installation, reflecting the scale of the Cook Monument but taking a different form. The wavelike shape references the nautical migration told through whales and their significance to navigation. The whale shaped opening in the piece is made to honour this. Te Ikaroa a Rauru (the long fish of Rauru) was the waka captained by Māia Poroaki from Hawaiki to Tūranganui-a-Kiwa. The place where this sculpture stands is where Māia built his whare wānangā, place of learning, that he named Puhi Kai Iti.

The new Ikaroa sculpture reflects the scale of the Cook Monument but takes a different form. The wavelike design and whale-shaped opening references the nautical migration told through whales and their significance to navigation.

Above, on Ruatanuika lookout, a circular sculpture honours a significant tipuna – Te Maro, the grandson of the rangatira Rakai a Tane, who was killed at the Endeavour arrival in 1769.

Te Taumata-o-Tītīrangi is an important cultural and spiritual landscape of Ngāti Oneone and Te Tairawhiti. The maunga has been undergoing restoration of its flora for the last five years with the vision to restore the landscape and for the reconnection of iwi identity and prosperity of Ngāti Oneone. This project visually restores the link between maunga ki moana (mountain to sea).

Material selection was informed by the marine environment and the required scale and durability. Fine-gauge Corten steel was selected for the tukutuku panels, which allowed these elements to bend naturally to the radius needed without distortion to the design pattern. 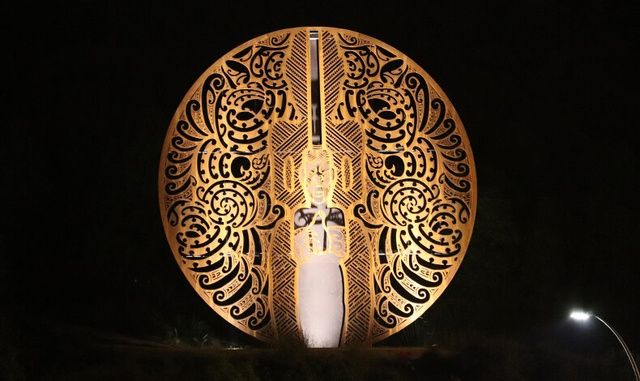 A circular sculpture honours a significant tipuna - Te Maro, the grandson of the rangatira Rakai a Tane, who was killed at the Endeavour arrival in 1769. It is made of steel, ten metres high, and weighs nine tonnes. It will be viewable from the city and Waikanae.

The material is also used for the Ikaroa sculpture, which has been positioned on a white concrete plinth to elevate and enhance its presence, in relation to the existing James Cook monument; bringing balance between the narratives.

Made in three segments, the highly-detailed pattern was precision-cut into the steel. Nearby, oversized hue (gourds) made of pigment-integrated ferrocement render over a wire frame represent Maia’s arrival and the subsequent development of cultivation skills.

All the elements were fabricated locally, adding another dimension of reconnection and contextualisation to the project.

landscape architecture
monument
sculpture
Archifynow
blog platform
ArchifyNow is an online design media that focuses on bringing quality updates of architecture and interior design in Indonesia and Asia Pacific. ArchifyNow curates worthwhiles design stories that is expected to enrich the practice of design professionals while introducing applicable design tips and ideas to the public.
View Profile
More from archifynow 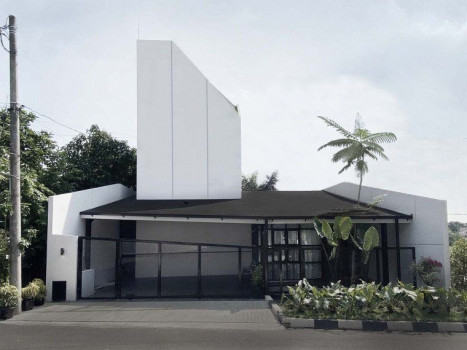 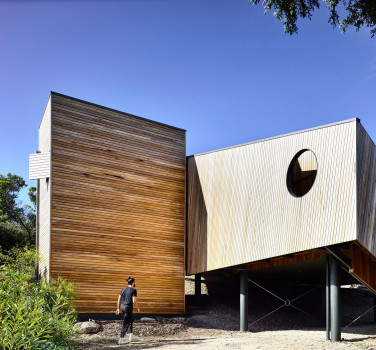 PROJECT - AUSTRALIA
4 MONTHS AGO
Sandy Point House
Perched on the coastal dunes of eastern Victoria, this is a holiday house for a family who have a long association with the modest beachside hamlet of Sandy Point.

PROJECT - NEW ZEALAND
9 MONTHS AGO
River Retreat
Recipient of the NZIA New Zealand small project architecture award, the simple skewed form of this house has an appropriate scale and presence within the wider landscape.