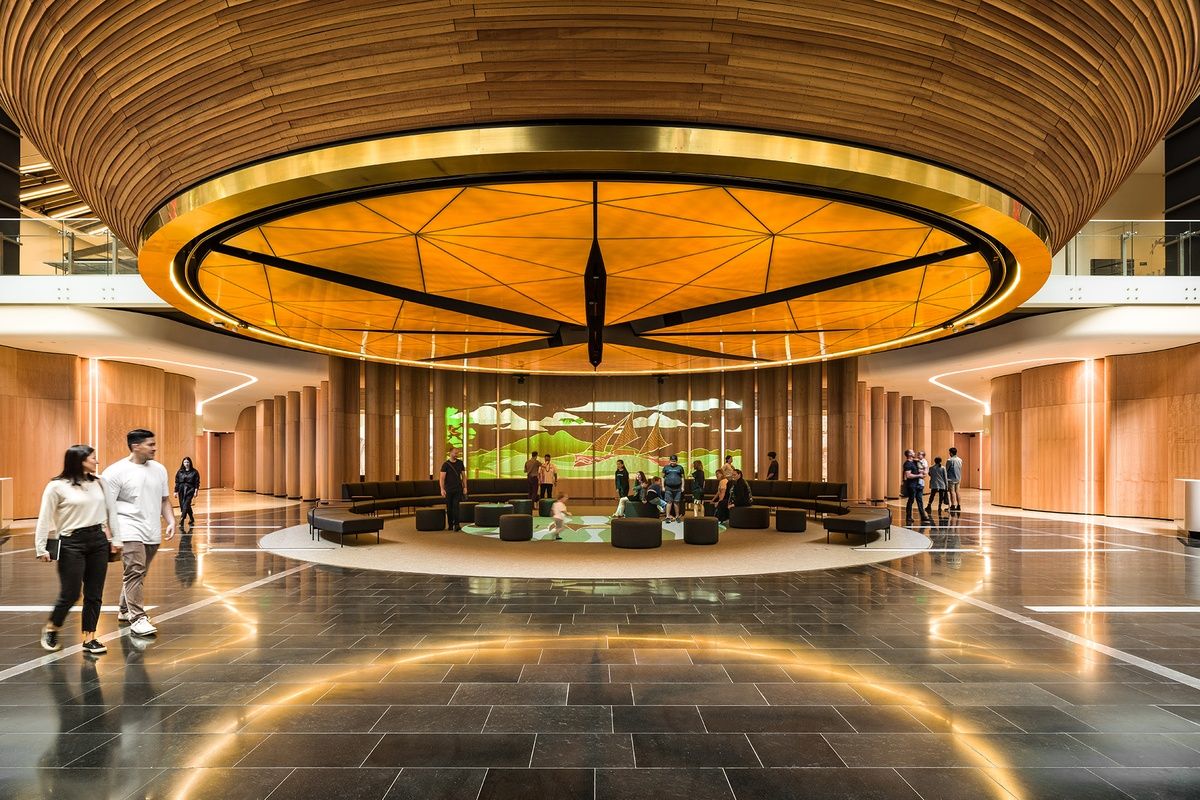 Te Ao Mārama: Ripe and bursting at the seams

VIEW PROJECT
In part one of our Te Ao Mārama series, Albert Refiti discusses the vitality of naming, the cross-cultural myth-histories and the moana architecture of this

In part one of our Te Ao Mārama series, Albert Refiti discusses the vitality of naming, the cross-cultural myth-histories and the moana architecture of this makeover by Jasmax, FJMT and designTRIBE at the Auckland War Memorial Museum.

For Māori and Pacific people, ingoa or names have played a crucial role in social and cultural systems for fixing the world, ever since Rangi (sky) and Papa (land) were disengaged in a primordial struggle by the first ancestors to attain Te Ao Mārama – the lived world and the new name for the South Atrium. Names are thus symbolic of important concepts connecting people and the environment, and assembling together a world view. They reveal a basis for reading anew the architecture of the Auckland Museum with origins in repicturing Greek and Pacific myth-histories that are redolent with blood sacrifice. To untangle this metaphorical architecture is to read lines carved in stones and wood to find the proper context of a cross-cultural bloody architecture, which includes the latest refurbishment by Jasmax, Francis-Jones Morehen Thorp (FJMT) and designTRIBE, and heritage consultants Salmond Reed Architects.

The solemn, neoclassical design of 1929 by architects Grierson, Aimer and Draffin, and subsequent additions, closely follow the minimal Doric architectural order. The most prominent feature of the style is the ornamentation of the entablature. The triglyph pattern is shown in typical fashion as simplified vertical shafts depicting a thigh bone chopped into three portions and wrapped in fat, and just below are blood droplets known as regula.1 These elements signify that the entablature of Greek architecture was once a sacrificial altar. The bloody reminder is further magnified by the friezes depicting violent battle scenes, commemorating the museum’s founding as a war memorial museum. They wrap around the entire building, including the later additions to the southern end. To cap it all off, the edifice is sited on an old Māori battlefield, the scene of conflict between Hongi Hika and Pōtatau Te Wherowhero in the 1830s, known as Pukekawa, hill of bitter memories. 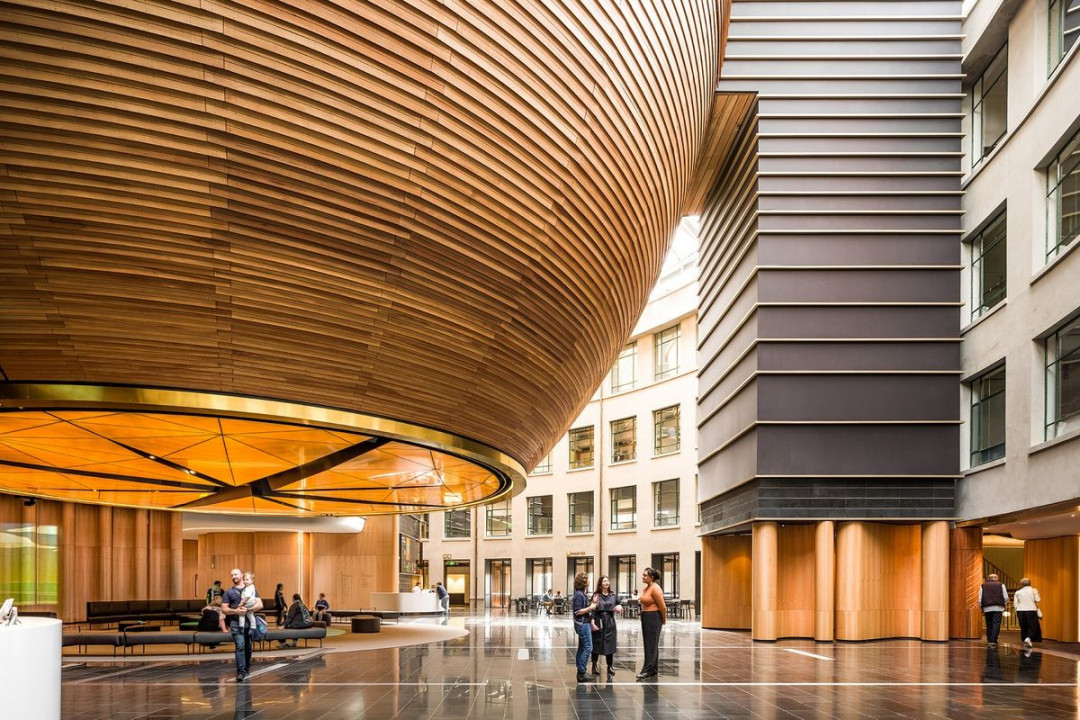 Te Ao Mārama atrium has a newly constructed entry through one of the legs of the kava tanoa. Image: Dennis Radermacher

In 2002, Noel Lane Architects was tasked with filling in the semicircular courtyard to accommodate an event centre, lecture hall and education centre. My part in the museum addition began in late 1994 and continued until 1996 when, as a young architectural graduate, I was assigned by Noel Lane to write up and pull together a feasibility study for an IMAX theatre and information centre for the courtyard, after he won a limited competition for Stage 1 of the museum’s refurbishment.

The design was determined by the courtyard’s semicircular form and the stipulation from the heritage team: ‘do not touch’ the existing building. Thus, the styling of the fit-out was ‘to differentiate the new from the old’. This began with the Pacific galleries’ original fit-out, where the chunky metal cases for the tāonga would stand away from the existing building in the Masterpieces Gallery or were made to lodge into the existing crevices of the neoclassical building, as in the Lifeways Gallery. When it came to the South Atrium, Lane determined that the operative motif would be a bowl that is “chunky, ripe and bursting at the seams… a container of information, so it was important to make the design strong, but approachable, and the light spilling into the space helps achieve this”.2

The original design was a cylindrical form, suspended on posts standing clear of the existing building, to house the information centre. Later sketches clearly show a bowl shape suspended from four distinct legs. Around 2002, I visited Lane’s office, which was then in Bowen Avenue, to find a Fijian kava tanoa on his desk. Knowing that he collected Pacific tapa cloths, I thought nothing of it until the new atrium opened in 2006. Noel Lane has never spoken directly of how he conjured up a Polynesian artefact at the museum’s heart. Still, the sketches and the nature of the Fijian kauri cladding bear witness to a desire to incorporate a cross-cultural narrative to make a new mythology, fitting for the 21st century.

At the same time that Jasmax and its team won the limited competition for the master planning and the refurbishment of the South Atrium in 2014, I became a Pacific architecture consultant to the museum; I had held a similar role in 1998–2000, when the Pacific galleries and collection were being renewed. The museum had put in place the Teu le Vā Pacific dimension in 2012, to facilitate the relationship between the Pacific communities and their tāonga within the space. 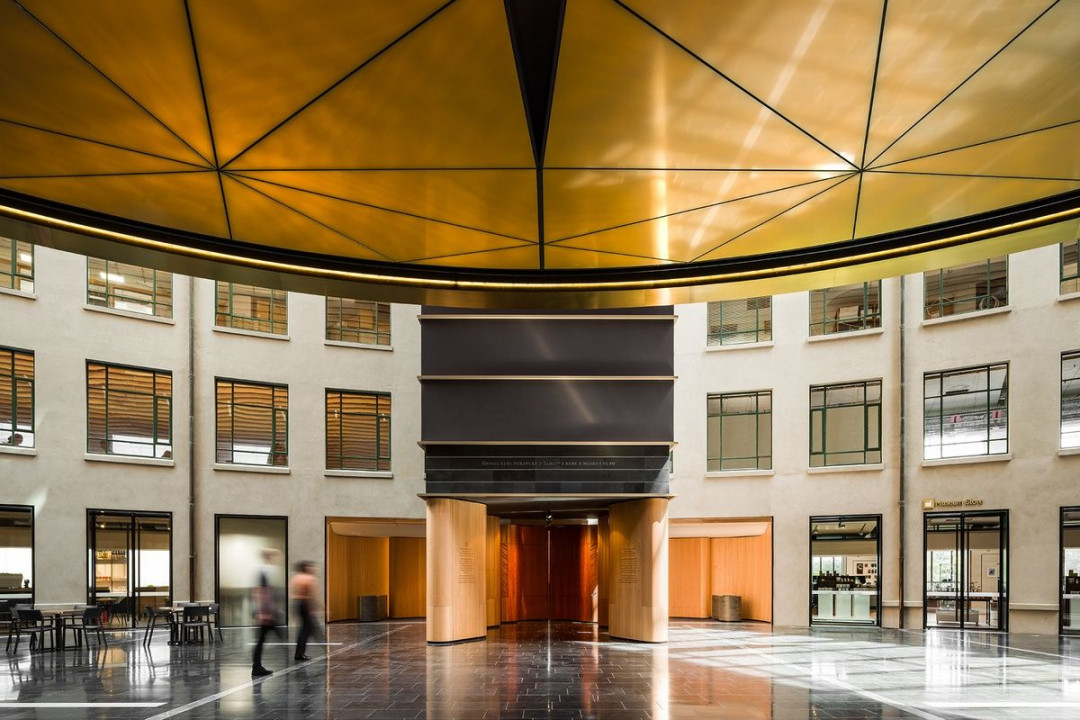 This view of the entry gate is from underneath the tanoa. Image: Dennis Radermacher

I began advising the museum on the meaning of the bowl, or tanoa, that was then clearly evident to me in the South Atrium. After consultation with Rau Hoskins, Jasmax, mana whenua, Te Taumata-ā-Iwi Māori Committee, the Pacific Advisory Group to the museum and important Pacific knowledge-holders about the aspirations of Pacific people to have a proper place in the museum, the discussion turned into a way for indigenising the museum. That is when common stories were explored as ways to name and fix the South Atrium’s identity as the encounter between Māori and Pacific people in their myth-histories connected to the origin of the world in Te Ao Mārama, and, at the heart of this, is a temple made from an oversized tanoa.

From then on, Jasmax and the team were advantageous in their approach to reveal the extent of the tanoa’s parabolic form fully; the form had been partly obscured by a narrow, curved stairwell positioned to the left of the tanoa and the encroaching temporary exhibition gallery space that was then located beneath, covering half of the curved form.

The tanoa now floats freely in the space and its chunky, pregnant curves rise outwards, like outstretched arms, towards the slit windows on the roof. Underneath the tanoa is a compressed, circular space designated as a kava circle for Pacific rituals and ceremonies, and where tāonga are shown publicly and sung into the present by the community. Because it is a kava bowl, the tanoa has the name Talitali ‘Au Moana, which means the safe waiting place for those from the moana.

The kava ceremony in most Pacific traditions originated from the burial mound of a sacrificed young person where the first kava plant grew, its roots pounded and mixed with water to make the muddy and peppery drink. The kava ceremony eventually replaced ritual acts connected to blood sacrifice and the tanoa came to signal the peaceful nature of sitting and facing each other in a ring formation, and reflected in the word tanoa meaning tā – to make or create – and noa – to make safe the space for the living and the dead to co-mingle in the drinking of kava. 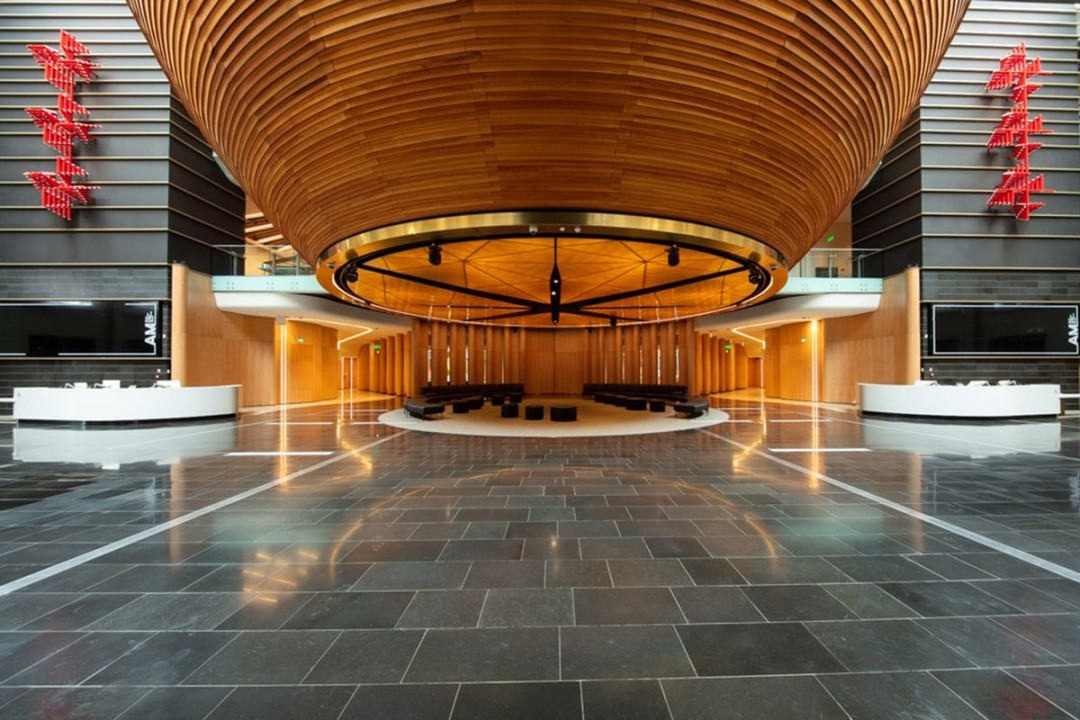 What started out in 2006 as cross-cultural space-making has been transformed into a space for decolonisation to begin. The new articulation of the South Atrium as Te Ao Mārama, the realm of light, is aptly conceived in acknowledging the crucial roles that Māori and Pacific people play in the histories and stories that are buried under, or housed in, the collections of the museum. The commissioned artworks solidify cultural safety and provide guidance to the future of the community in the museum.

Te Tatau Kaitiaki waharoa, the entry gate by Graham Tipene, depicting two female ancestors is there to signal the hau or breath that circulated when the sky and earth were propped apart by Tāne Mahuta to provide the primordial opening of Te Ao Mārama. The vitality of earthly pleasures and connections are celebrated by Filipe Tohi’s abstracted pair of crimson birds or Manulua clinging to the legs of the tanoa. The final artwork – Chris Bailey’s two ritual cleansing gourds, Hine-pū-te-hue and Rongomātāne, one at each side of the entry – acknowledges that museums are places where the spirits of ancestors reside.

1 George Hersey, The Lost Meaning of Architecture: Speculations on Ornament from Vitruvius to Venturi, MIT Press, 1988.

Commercial
Museum
Memorial
Timber Cladding
Archifynow
blog platform
ArchifyNow is an online design media that focuses on bringing quality updates of architecture and interior design in Indonesia and Asia Pacific. ArchifyNow curates worthwhile design stories that is expected to enrich the practice of design professionals while introducing applicable design tips and ideas to the public.
View Profile
More from archifynow 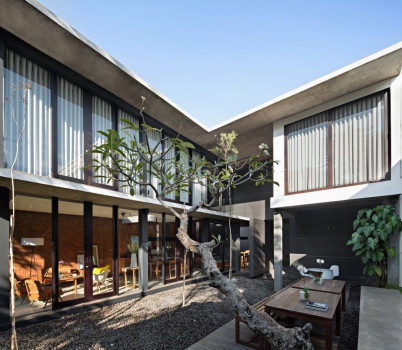 PROJECT - AUSTRALIA
1 YEAR AGO
Sujiva Living
The man of the house is a principal architect for a design studio, who wants to have an ideal house for his family and a small studio for his architecture office, while his wife is a pioneer in the user experience service field in Indonesia. The combination of both brings the design to a level, where it possesses a rare and incomparable space experience for each occupant. 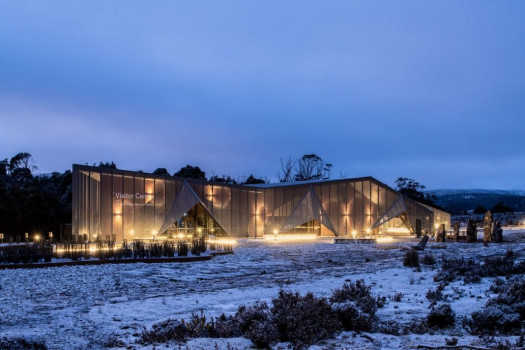 PROJECT - AUSTRALIA
11 MONTHS AGO
Cradle Mountain Visitor Centre
Sharp geometric forms beckon to a honeyed cave Cradle Mountain Visitor Centre is a building of contrasts. It’s imposing but harmonious. It’s an abstract interpretation of nature. And it’s modern with a rightness unrooted in time. Most surprising of all, perhaps, is how the raw exterior unwinds into a warm, soft, delicate timber lining. 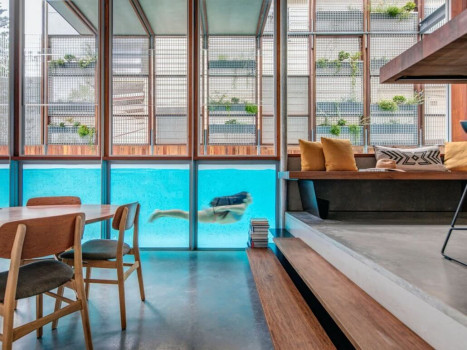