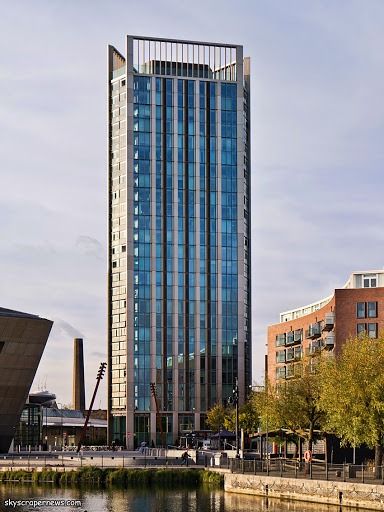 At the heart of Maple Quays the mixed-use Ontario Point tower block, located right next to the busy Surrey Quays road, is the first high-rise structure in the UK to be both protected and promoted by Ascent during the construction process.

Thanks to the dual functionality of the Ascent screen system, designed by RMD Kwikform, Barratt Homes has been able to promote the new complex to potential buyers with a huge printed screen, that towers above the landscape.

At the same time, operatives working for contractor Atlantic Contracts, which is building the concrete frame, have been able to protect the general public from falling construction debris, by constructing a complete seal around the building. With multiple layers of redundancy, stopping items falling from one floor to the next, the Ascent system has also provided construction workers with complete protection from high winds. This has in-turn allowed Atlantic to complete the construction of each floor in nearly half the programme time.

Project engineer for Atlantic Contracts, Kevin Dennehy commented: “Due to close proximity of the site to Canada Water underground and bus station, the RMD Kwikform Ascent screen system was brought onto site to secure the building for safety purposes. The system has worked extremely well, providing a safe, sheltered working environment for our operatives. By the nature of its design, we can achieve a completely sealed wrap around the whole building, protecting the public below.

“Having had previous experience of the Ascent system on another project in Kings Cross, we recognised the benefits of preassembly and adopted that same method for this project. RMD Kwikform were able to delivery pre-assembled units to the site, which we could simply unload and lift into place. From a site safety and storage perspective, this was a major benefit and commercially it reduced the need for labour onsite.”

At the tender stage, Atlantic Contracts and RMD Kwikform worked with Barratt Homes to develop the system and graphics for the panels, designing the moving billboard in the sky to suit the needs and commercial objectives of Barratt Homes.

Commenting on the project and its first use of Ascent, project manager for Barratt Homes East London, Danny Masters said: “The new Ontario Point tower is the focal point of our multi-million pound Canada Waters project. Once completed it will house 900 apartments with a mixture of 600 private and 300 social housing dwellings.

“Obviously with any development of this type in the city of London, we look to maximise the publicity for the project at the time of building, whilst ensuring it is constructed to the highest quality and safety standards. When we were looking to appoint a contractor for the concrete frame, Atlantic were very proactive in showing us how we could use the new Ascent product to both promote and protect the site.

“Having a huge billboard in the sky that climbs with the building and promotes it to a live audience was an golden opportunity that we could not miss. Coupled with the added safety features for the site, which creates a ‘working platform in the sky’ the proposition from Atlantic and RMD Kwikform was very powerful.

“As an added benefit, we have seen a dramatic increase in the cycle times for the construction of each floor, something that we did not expect. Because the Ascent screen covers three floors, one for the working lifts and also the two prop lifts below, this has allowed the Atlantic team to construct the lift above, but also have the safety element of the two lifts below when the formwork is being struck.”

The original cycle time for the tower was programmed for two weeks per floor, based on the previous experience of contractor Atlantic Contracts. By working together with engineers from RMD Kwikform during the specification and design phases, the Atlantic team were able to make slight changes to the Ascent system. These modifications allowed the cycle time to be reduced from two weeks to just over a week per floor.

RMD Kwikform UK’s engineering director, Ian Fryer added: “The Ascent system has been designed with city centre locations in mind. For example, in London you are dealing with some of the largest high-rise projects in the UK, in a very congested environment. By being able to design a system that can be pre-assembled and tested in factory conditions before being shipped to site, the performance and safety features are enhanced dramatically, as there is no room for human error.

“This approach allows for just in time delivery and an enhanced construction management process, with crane and staff utilisation optimised at designated times. Being a new product to the market, we have also been able to see what kind of impact the system is having on reducing programme time. By working with Atlantic we have been able to support them in achieving some dramatic reductions in cycle times for this project.

“The feedback from the construction team has also been very positive, particularly when the concrete frame reached the upper levels. Because of the protected environment Ascent provides, the team has been protected from the wind in what is a vertigo-less environment. This has been a major benefit and has led to the team christening Ascent as the ‘working platform in the sky.’

Ascent 200
United Kingdom
Ascent 200 is the latest evolution of the award winning Ascent safety screen system. Designed to provide complete protection for workers and public on high rise construction projects. The Ascent 200 system has been developed in conjunction with major contractors to ensure that it provides for all your screen requirements. New features include new mast design improving strength to weight ratios and allowing construction of two wet decks and columns. Ascent screens are also slimmer in profile improving logistics and transport costs.
More Updates