Delta > Updates > How to Design Like a Pro: Advice from Interior Designer Bobby Berk

How to Design Like a Pro: Advice from Interior Designer Bobby Berk 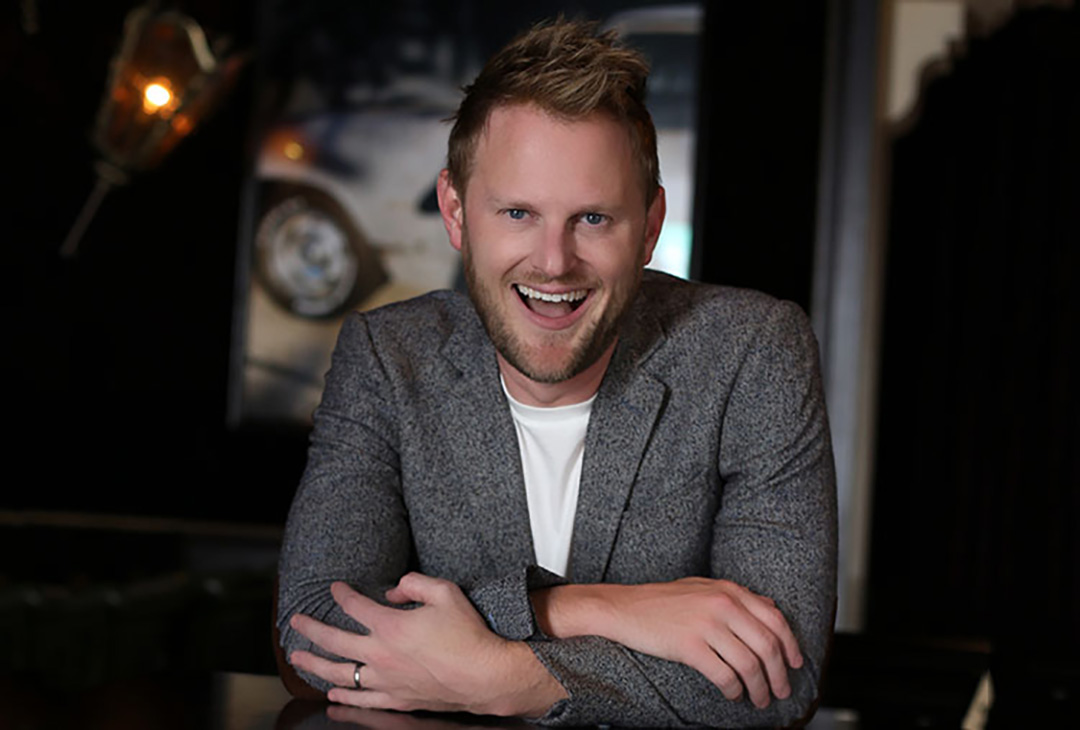 Bobby Berk has won over our hearts by making over our living spaces as the design expert on the popular Netflix show “Queer Eye.” The celebrity designer has an extensive history of innovation in the design world, heading up Bobby Berk Interiors + Design, which specializes in the homebuilding industry, and the Bobby Berk Home collection for home décor.Berk’s passion for the craft shows through in his work on screen—and it’s the real deal, as we quickly discovered by talking to him.“Design has the power to change the way a person lives,” Berk says. “I love to create a space that people feel at home in, are excited by and feel represents their personality and tastes. There is no better feeling in the world than helping someone find their ‘home’ within the space between four walls.”You don’t have to be in an episode of “Queer Eye” to benefit from Berk’s design eye. We chatted with the famed designer while he was in New York to celebrate the Delta Design Beyond program.Here are Berk’s top tips for interior design.

Design inspiration can come from anywhere—if you’re looking for it.

A sense of design is like a muscle that develops the more you use it, Berk says. “When you start to see the world through a more creative lens, you start to find inspiration literally everywhere,” he says. “I take pictures of random things all the time because they have something unique that I think I can apply to my work. You have to just train yourself to open your eyes and look around.” 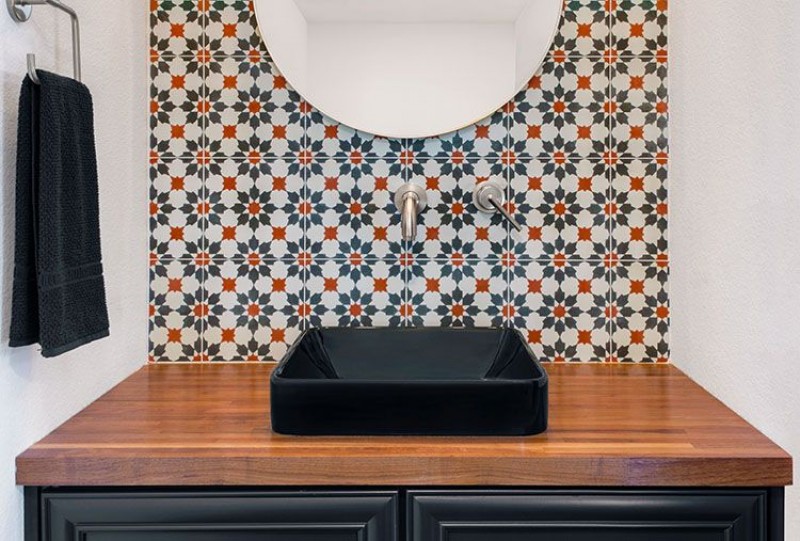 Bobby Berk says it’s OK to mix things up. In this bath he designed, Berk mixed patterns in a cohesive color scheme to look intentional (and paired it with a Trinsic wall-mount faucet). (photo: Pardee Homes)

Design for what feels good to you, not necessarily what looks trendy.

One mistake Berk sees people make is designing spaces based on what is trendy or might increase the home’s resale value instead of what makes the home enjoyable and comfortable to live in.“Trends will come and go,” he says, “but design that stands the test of time is more about creating a space that feels special to the homeowner. I love to work with my clients by first finding out how they really want the space to feel more than how they want it to look. Do they want it to be warm, welcoming, cozy, quaint, simple, open? Once we home in on how they want the space to feel, then we can create something that is timeless for them and their home.” 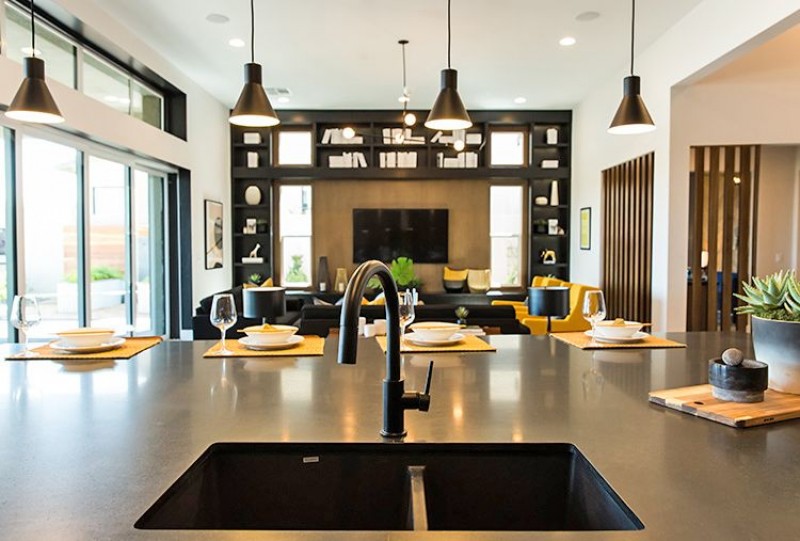 Don’t be afraid to be bold.

Fans of Berk know that he loves designing kitchens. He has a lot to say about expressing personal style in that space.“Thinking about doing that all-white, bright-white kitchen because it’s timeless? Think again,” he says. “Instead, think about using some bold colors—a navy, a light blue, a green, all of which are going to stand the test of time. Sticking with a neutral palette in the kitchen can be OK, but I love using more bold colors. It really makes an impact and makes the kitchen a happier place to be.” 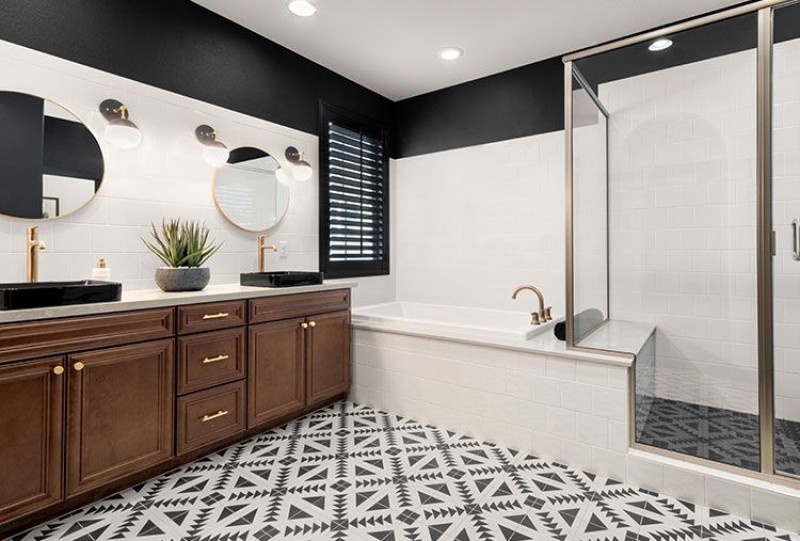 Bobby Berk on bathroom design: “If you’re going to mix patterns, make sure that they’re at least a cohesive color scheme.” Here, his use of the Trinsic Single-Handle Vessel Bathroom Faucet and Roman Tub Faucet in Champagne Bronze really pulls together the blacks, whites and browns. (photo: Pardee Homes)

Feel free to mix it up (with some limits).

In the kitchen: “Mixing finishes is OK—you don’t have to match them all. It’s OK to have a champagne bronze faucet and a stainless steel appliance—it still looks good, and it looks like you meant to do it. When mixing metals, at least make sure they’re the same finish. Don’t do a brushed and a polished—stick with either all polished or all brushed.”In the bathroom: “If you’re going to mix patterns, make sure that they’re at least a cohesive color scheme, so that way it looks intentional and not like multiple remodels. Using patterns in a small space can make it feel a little crazy, so my trick is to just do a pattern on the tile on the floor and keep everything else above neutral.”

Berk recognizes having an interior designer to help you transform your space is an additional expense in your budget. Don’t be tempted to skip it. These design professionals usually pay for themselves, he says, by preventing mistakes that you might have made on your own.“It’s not just about picking the right colors and finishes you like,” he explains. “It’s about making sure you measure the cabinets correctly, making sure you find materials that are going to last and finding the right contractor to do it.”

Delta
USA
What makes us Delta Faucet CompanyThe Delta brand lives by three tenets: water has the power to transform the way people feel every day, there can be magic in simple solutions and innovations flow from human insight. Inspired by our customers' needs, we've brought you technological magic with simple-solution innovations like Touch2O®, MagnaTite® Docking and H2Okinetic® Technologies. We pair thoughtful features, like being able to turn on your kitchen faucet with a tap of your elbow, with breathtaking designs and product that's built to last a lifetime.It's no wonder that the Delta brand is a leading innovator in the way you use water every day - after all, the best eureka moments happen in the shower.We believe there are better ways to experience waterThrough consumer-inspired innovations like In2ition® Two-in-One Showers, which allow you to get water where you need it most using the integrated shower head and hand shower together or separately, we’re committed to making technology feel like magic that makes your busy life a little easier.We Align Ourselves with Like-Minded InnovatorsAs the official faucet brand of the Southern Living Test kitchen in Birmingham, Alabama, you’ll find Delta Touch20 Technology in each of the four kitchen spaces. For nearly 50 years, we’ve partnered to bring you the very best in home inspiration and innovation.
More Updates