Furnitalia > Updates > The fine art of living, according to Jigs Adefuin

The fine art of living, according to Jigs Adefuin 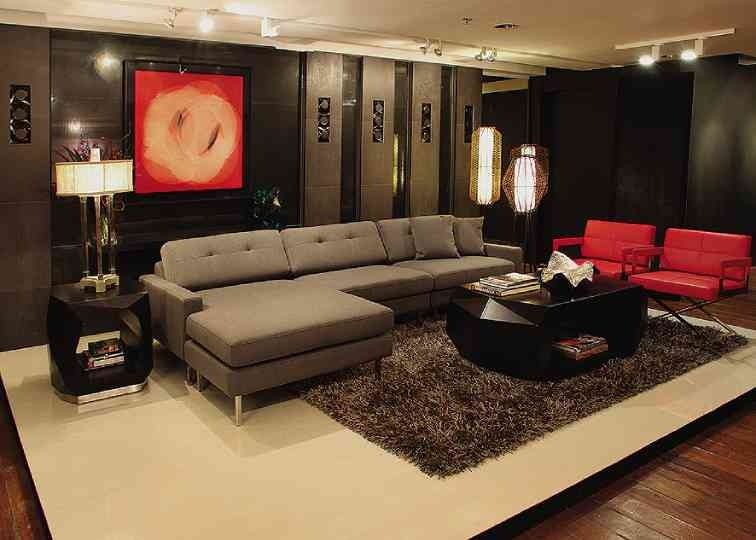 Interior designer Sigvard “Jigs” Adefuin has shown his versatility in creating tastefully decorated homes that range from traditional to contemporary.

Impressed with Adefuin’s talent and taste, Tony Lo, owner of Luzon Rattan Industries (LRI) and LRI Plaza, topbills him in the annual design exhibit “Masterpieces: The Fine Art of Living.”

Aside from photos of residential and commercial projects, the exhibit features three urban contemporary vignettes reflecting the designer’s style. Adefuin favors gray as the new neutral color. The furniture pieces are characterized by simple lines that create a sense of flow. The visual effect of the grays, combined with solid colors and clean-looking pieces, has a calming effect.

A graduate of the Philippine School of Interior Design (PSID), Adefuin landed in the top 10 when he took the board exams. He also received the PSID Award from his alma mater as one of the 10 most outstanding graduates. 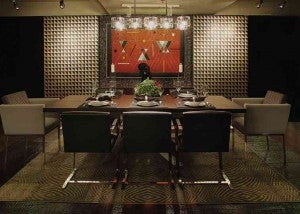 He credits his mentor from PSID, Nardy Aquino, for teaching him the rudiments. Aquino immediately hired his student to work in his design firm. For five years, Adefuin developed his talent for creative design solutions and cultivated his taste for strong colors. From Aquino, Adefuin learned about visual merchandising, work ethics in projects and business. He then worked for Ethan Allen, a brand of Focus Global Inc.
Today he runs his own firm, Adefuin Design Studio at LRI Plaza. He recalls that his first project was designing a neoclassic home, replete with paneled walls and wallpaper in brocade patterns, in Loyola Grand Villas. The home was decked with furniture with swerves, curls and ornate detail. He designed the pool with Spanish tiles and a lion’s head for the fountain spout. The place was so photogenic that it became the set for “Mula Sa Puso,” which starred Claudine Barretto.

His landmark project was a residence in Urdaneta, which started out as a neoclassic home. In the middle of construction, the owners decided they wanted a contemporary look. Adefuin had already ordered the materials and the furniture.

So as not to waste money and prolong the construction, Adefuin simplified the details and the proportions to update the design. Although some furniture came from a classic collection from Ethan Allen, he had them reupholstered with stronger colors  and bolder patterns to give them a modern look.

He created patterns from the marble in the kitchen and accentuated it with black tiles so that it wouldn’t look stiff and traditional. “It ended up as having a transitional style, a timeless look that combines traditional and contemporary style,” he says.

Adefuin tries to convince his clients to be adventurous with colors. In the past, they veered away from black. But when clients see his bathroom, which uses black Spanish tiles for impact, they want a similar look in their homes. For one client, he used stainless steel trim on black tiles, silver-gray mosaic accents and designer fixtures.

“I love to play with textures, lines and patterns,” says Adefuin.

He also creates details that add visual depth. For instance, in his dining room vignette,  an abstraction by Arturo Luz is set against a mottled wall with sponge finish, using colors from the painting. Likewise, at the exhibit, he put a mirror behind sheer curtains to suggest more sheen. 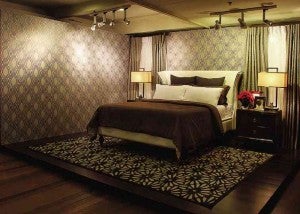 SOFT gray becomes a soothing palette for the bedroom. Braided chain patterns lift up the space without the need for artwork. Faux leather bed frame with grommets from Adori Interiors works on this transitional design. Adefuin designed the Philippine mahogany side tables with gold handles. Rectilinear lamps with marble base lend a modern touch.

One of his favorite projects was a condominium at One Roxas Triangle, which showcased designer pieces from Furnitalia against a color scheme of gray, black, brown and silver. Classic elements such as pilasters looked modern with silver travertine and stainless steel trims.

He played with textures such as shiny graphicote walls against the matte black walnut veneer walls. The Italian furniture looked as if they were floating on white Italian tiles. The lighting, from Stelz, no less, was a mix of LED, wall washers and compact fluorescent lamps.

This was one of the projects in which he could choose finishes and furnishing without looking at the price list.

Furnitalia
Philippines
Furnitalia is the Philippines’ first ever premier Italian furniture distributor and has been the country’s luxury store of award-winning furniture for more than a decade now. The  showroom in the Bonifacio Global City showcases over 30 Italian luxury brand partners Poltrona Frau, Molteni & C, Giorgetti, MOOD by Flexform, Medea Lifestyle, Fiam Italia, Veblen and Roda.For years, it remains as the leading purveyor of high-end Italian furniture in the Philippines. Each level of the three-storey expansive showroom is filled with opulent selections ranging from classic to contemporary style quintessential for home to office and outdoor spaces.
More Updates