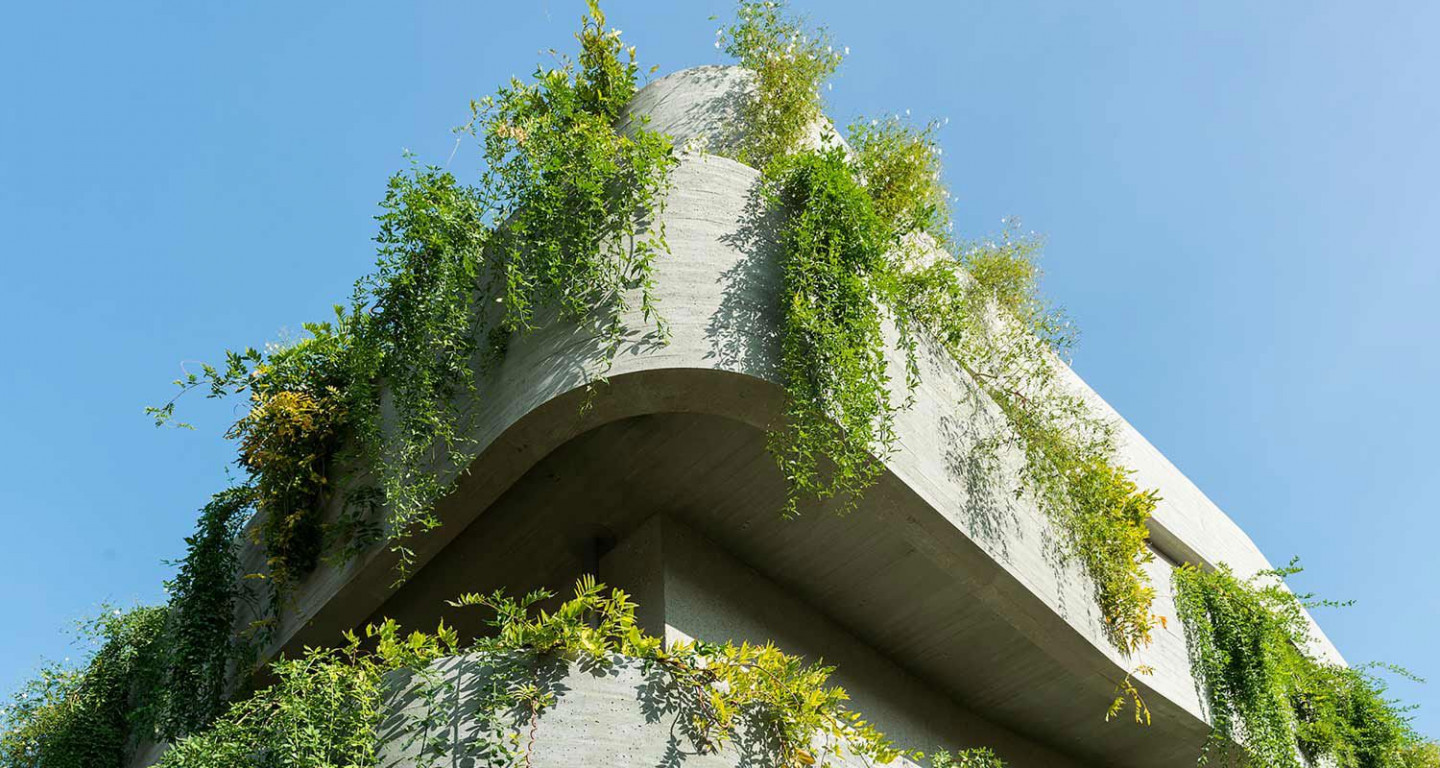 Floating Gardens is a project for a family home in the Athenian suburb of Psychico. The design subverts the typical convention of a suburban residence where a house is placed on a plot of land surrounded by vegetation. Instead, the ground floats in mid-air on a spiral structure, while vegetation hangs and climbs unifying the spiral topography into one three-dimensional garden. 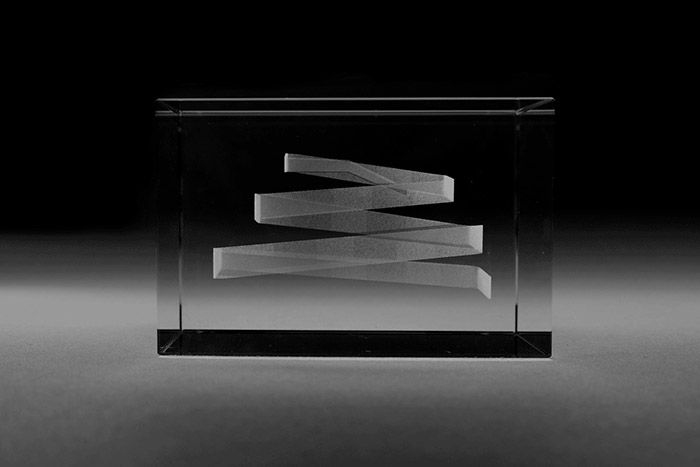 This is an early conceptual model of the project. It is a laser-etched solid glass block that shows a winding surface which peels upward creating a three-dimensional garden.

The design of the house evolved from the outside-in: the continuous garden ribbon connecting to all the main areas. 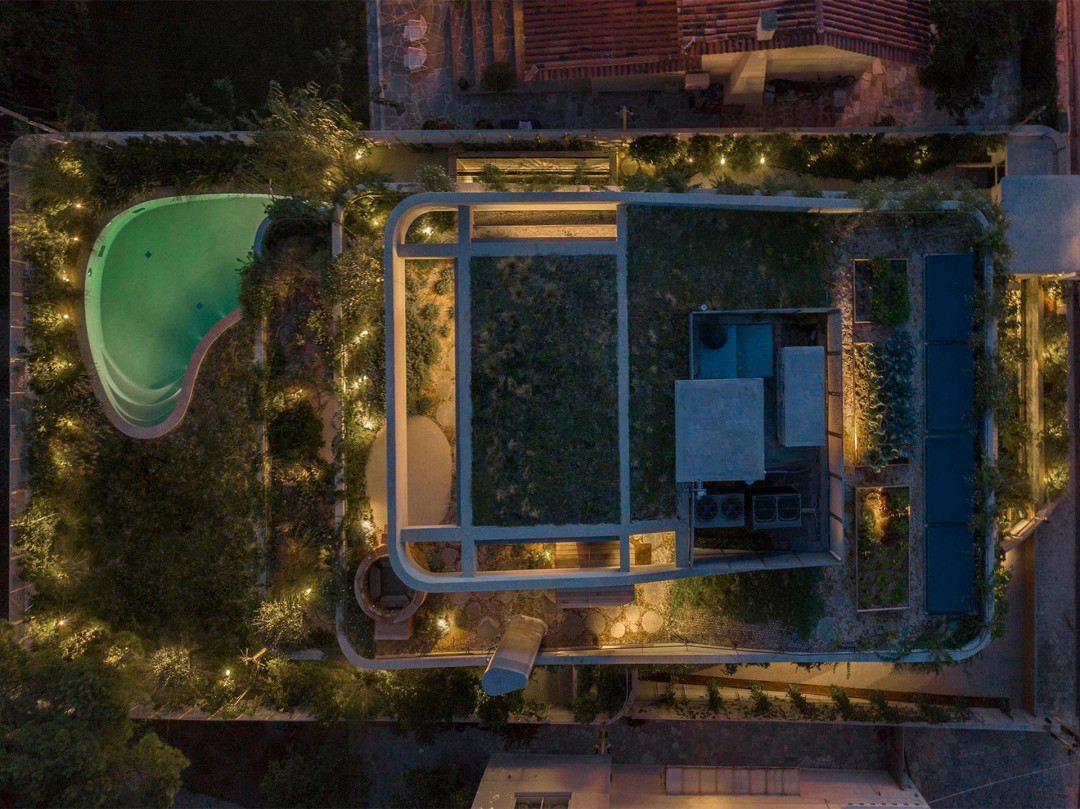 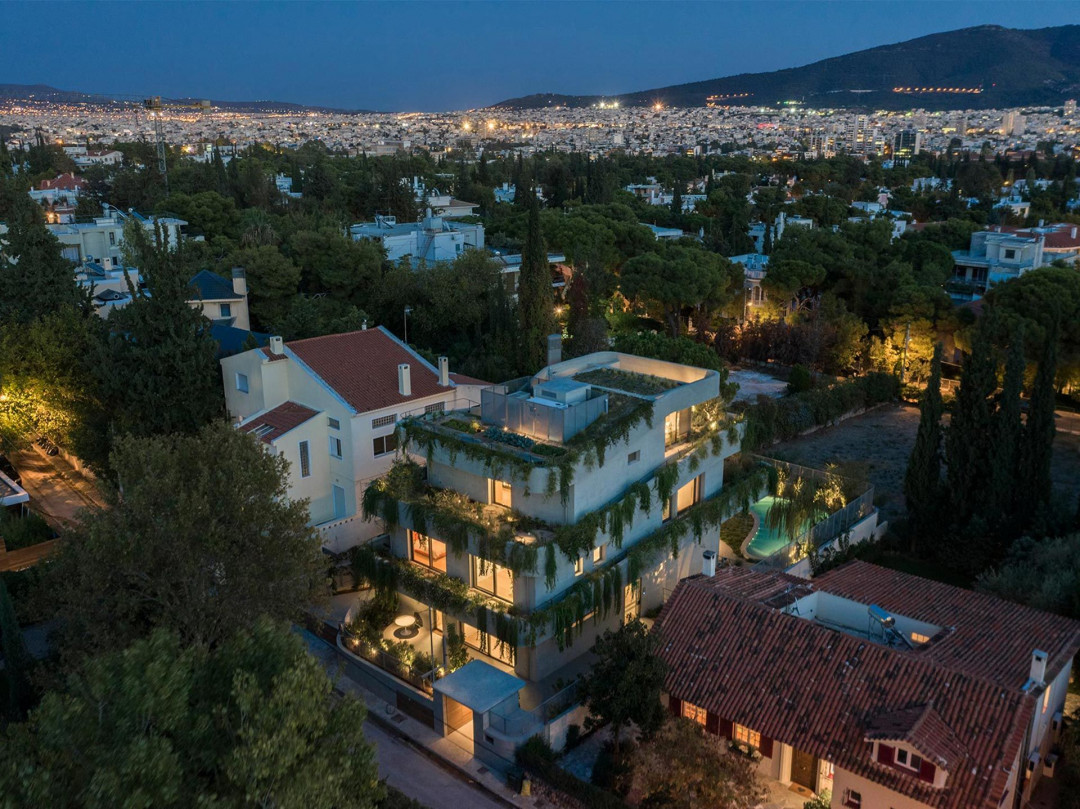 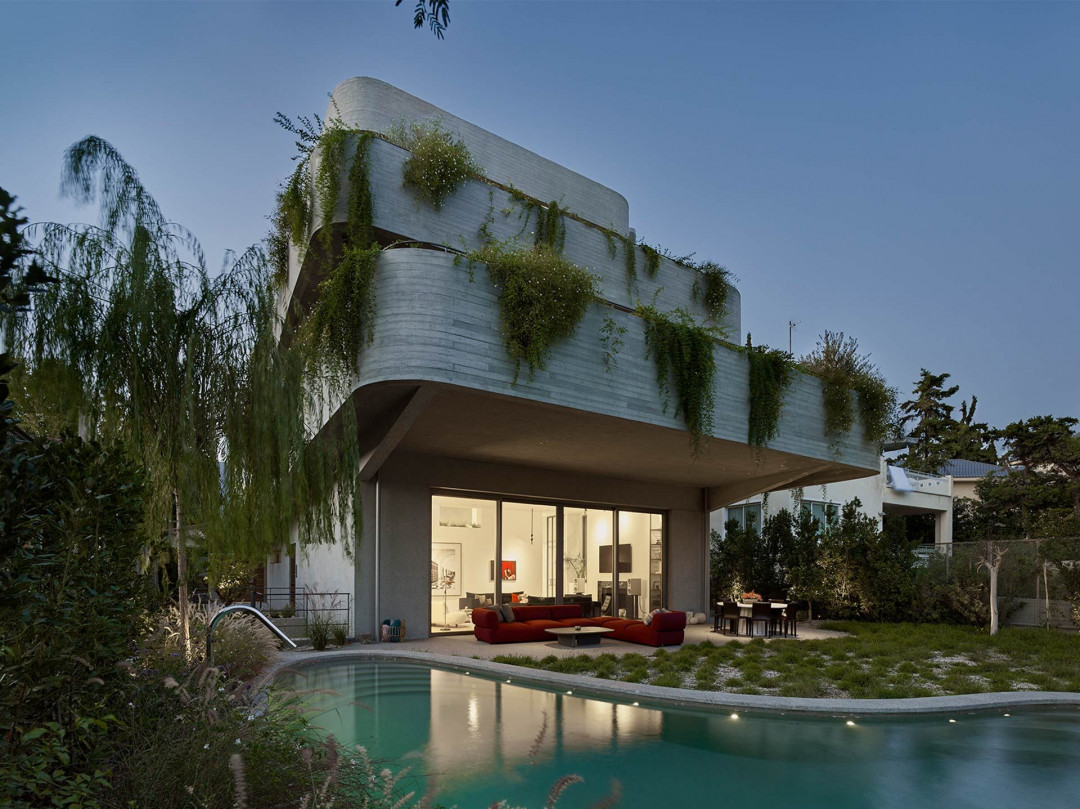 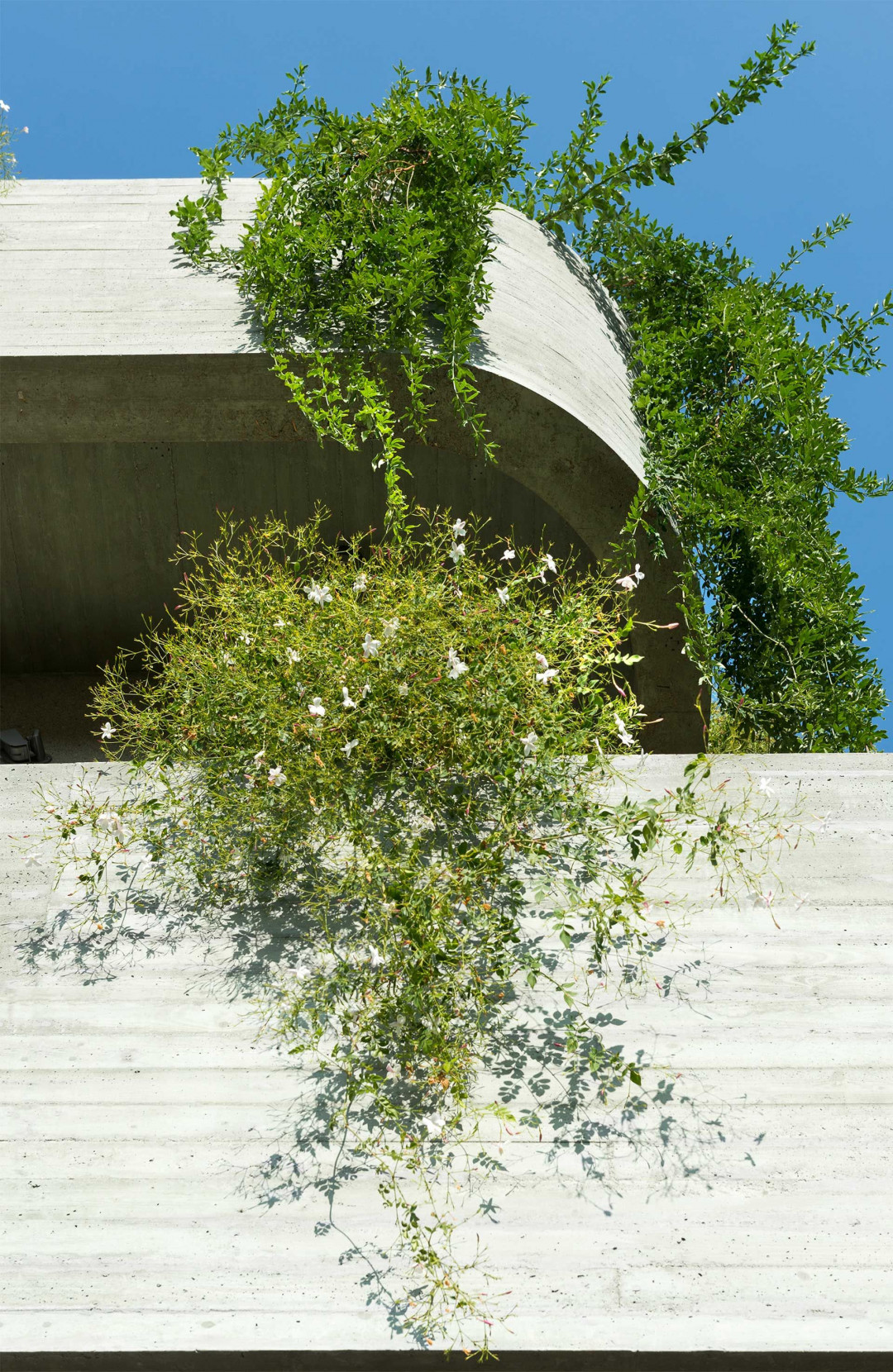 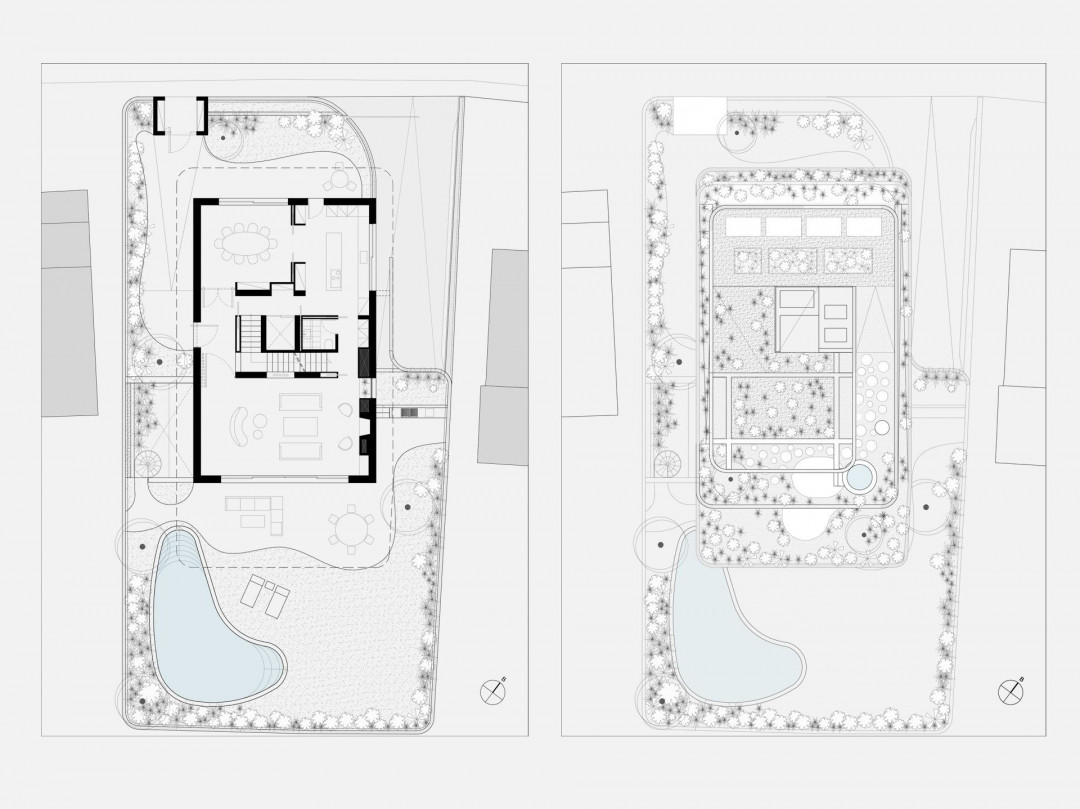 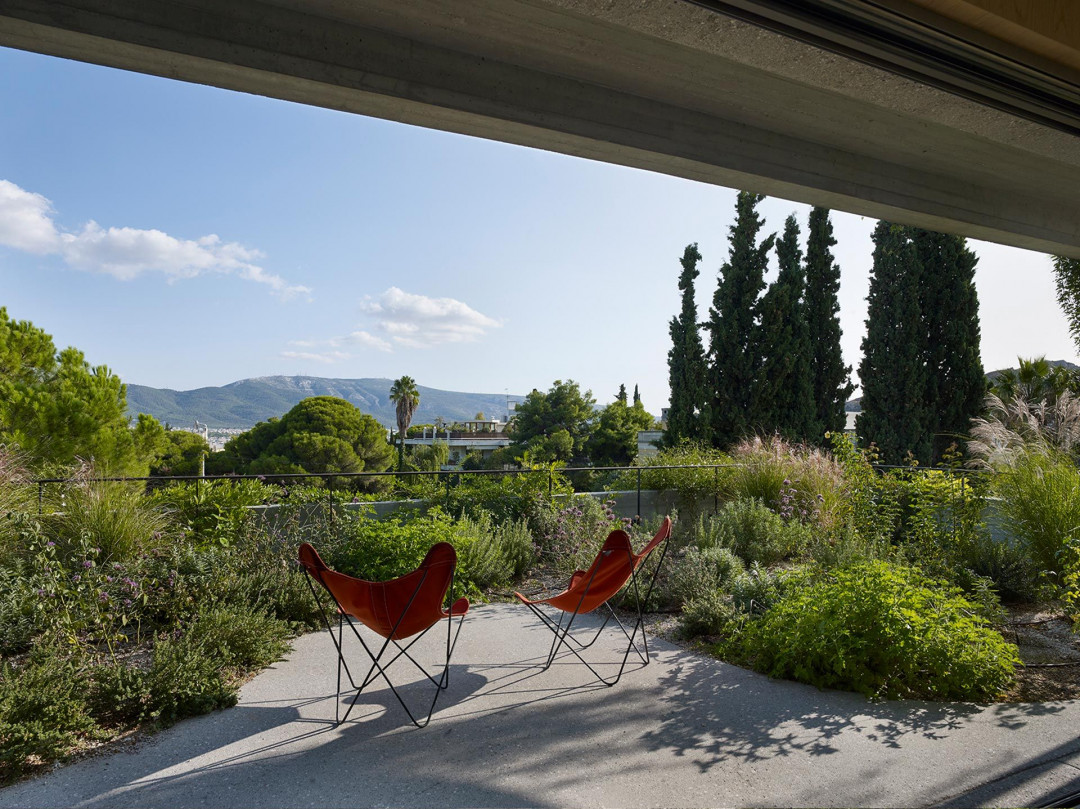 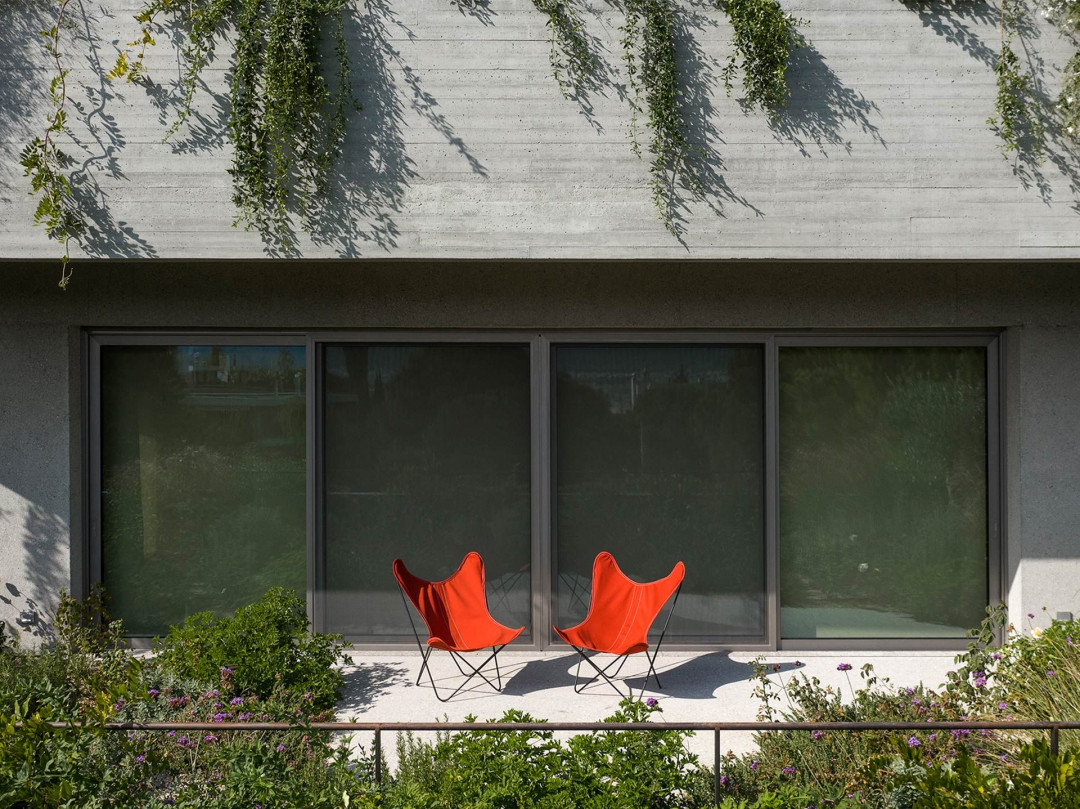 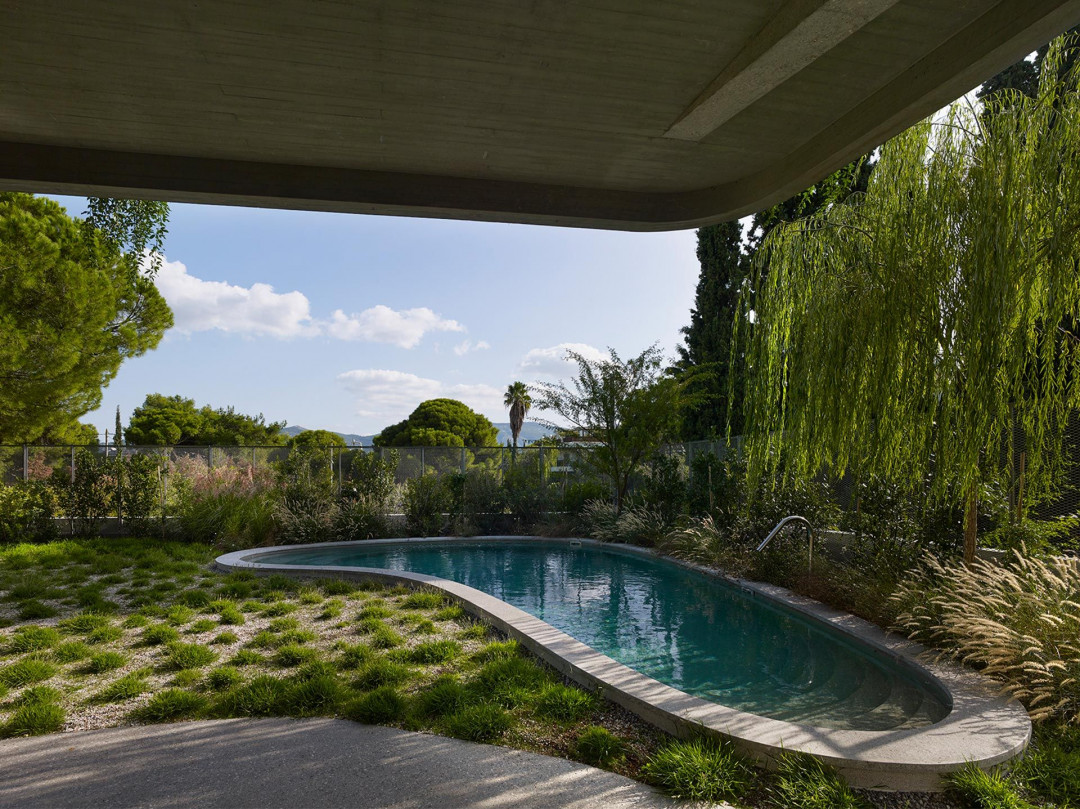 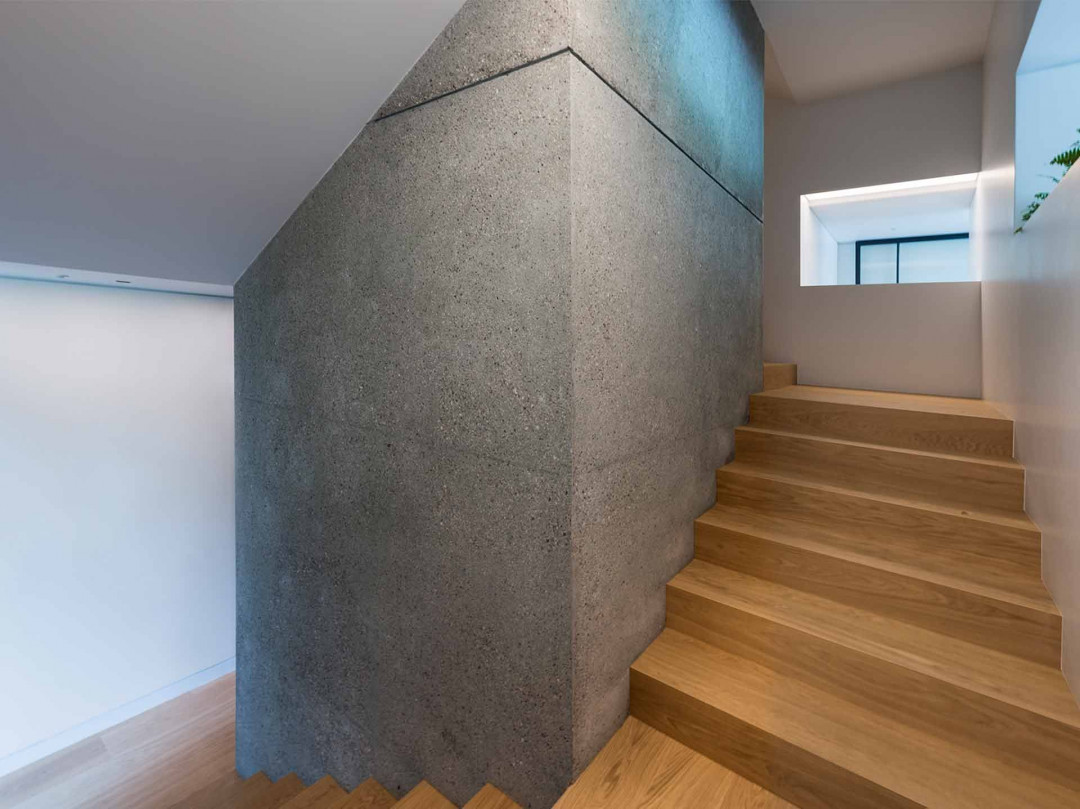 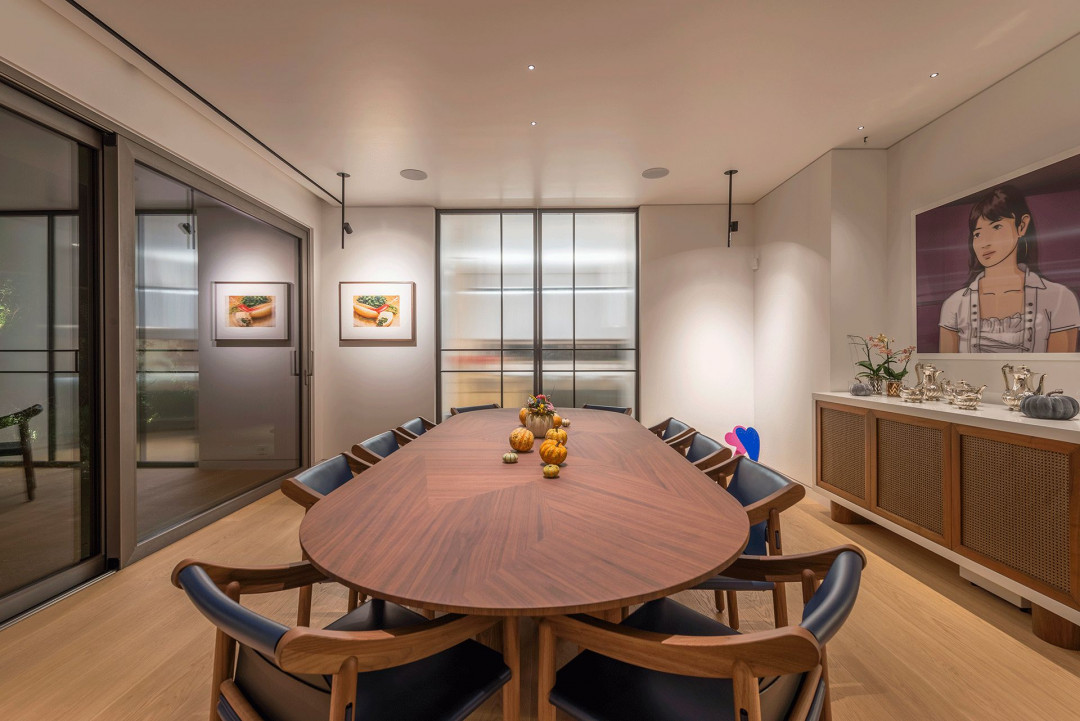 The shell of the building was cast in colored concrete. This required a rigorous sampling process in close collaboration with the lab of the concrete factory. We started with small portable samples. Four large panels of green and red concrete were brought on site. Different surface treatments and sealants were tested.

The final choice was a shade of green concrete. The concrete surface of the building envelope was bush-hammered, while the intricate mold of the spiral ramp was left exposed.

Two unique kinetic objects were designed and custom-built for the project:

The second is the door to the garage which is a steel fin operated by a large mechanical counterweight. 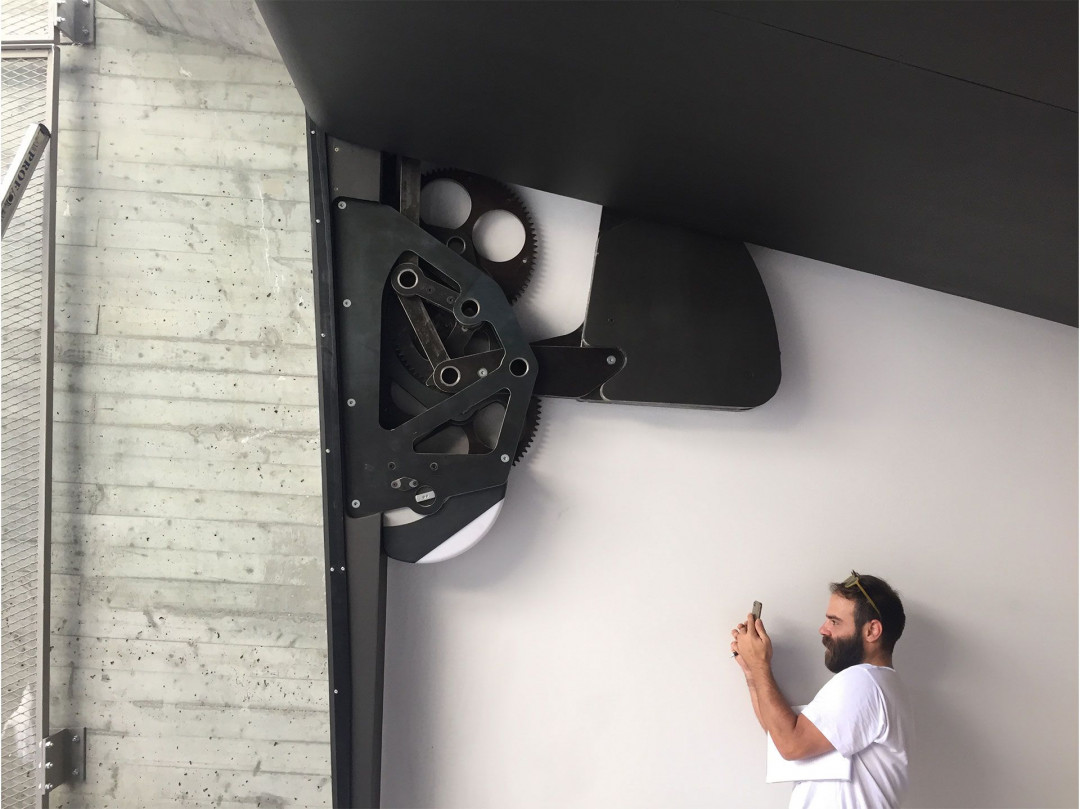 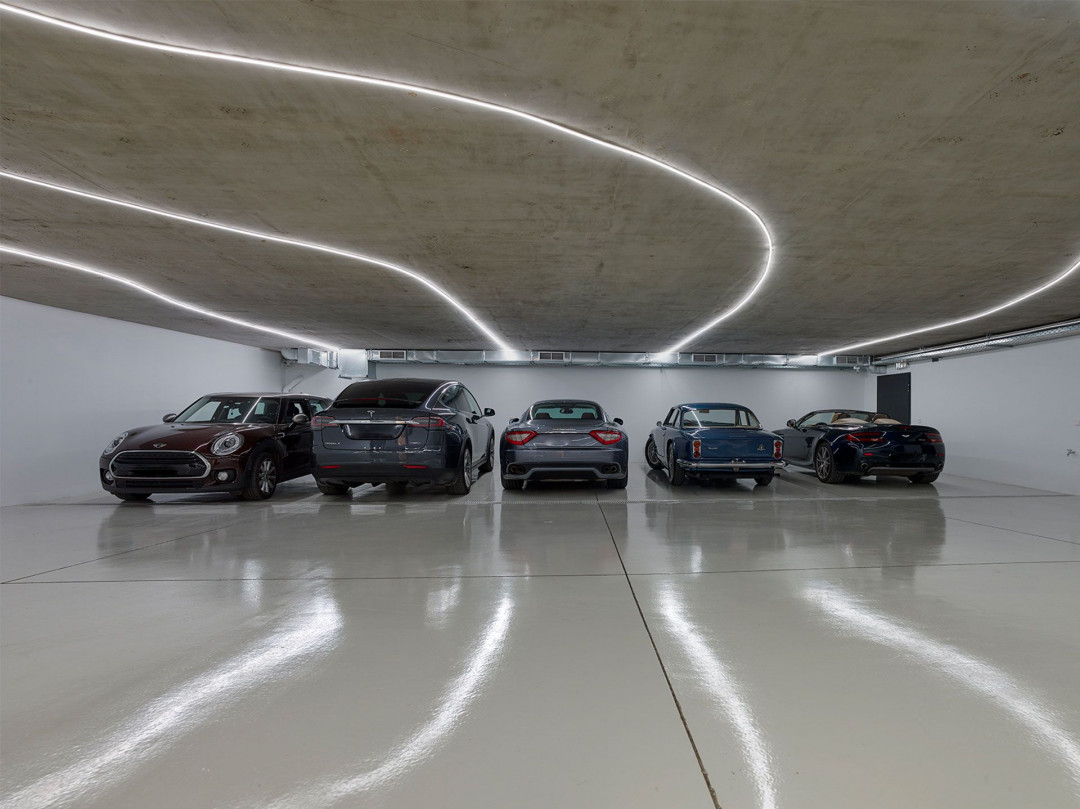 The Athenian Suburb of Psychico was established in 1926, a few years after Greco-Turkish war of 1919-1922. The population of Athens doubled at the end of the war, reaching 1 million inhabitants.

As a result of this abrupt population surge, suburbs were incorporated into the metropolitan plan. Three of these suburbs (Psychico, Ilioupoli and Ekali) were designed under the influence of the Garden City archetype proposed by Ebenezer Howard in 1898. The garden city movement proposed self-contained communities surrounded by ‘greenbelts’.

The Floating Gardens elaborates on this concept, at the scale of the residence, surrounding the individual home with a three dimensional floating greenbelt. 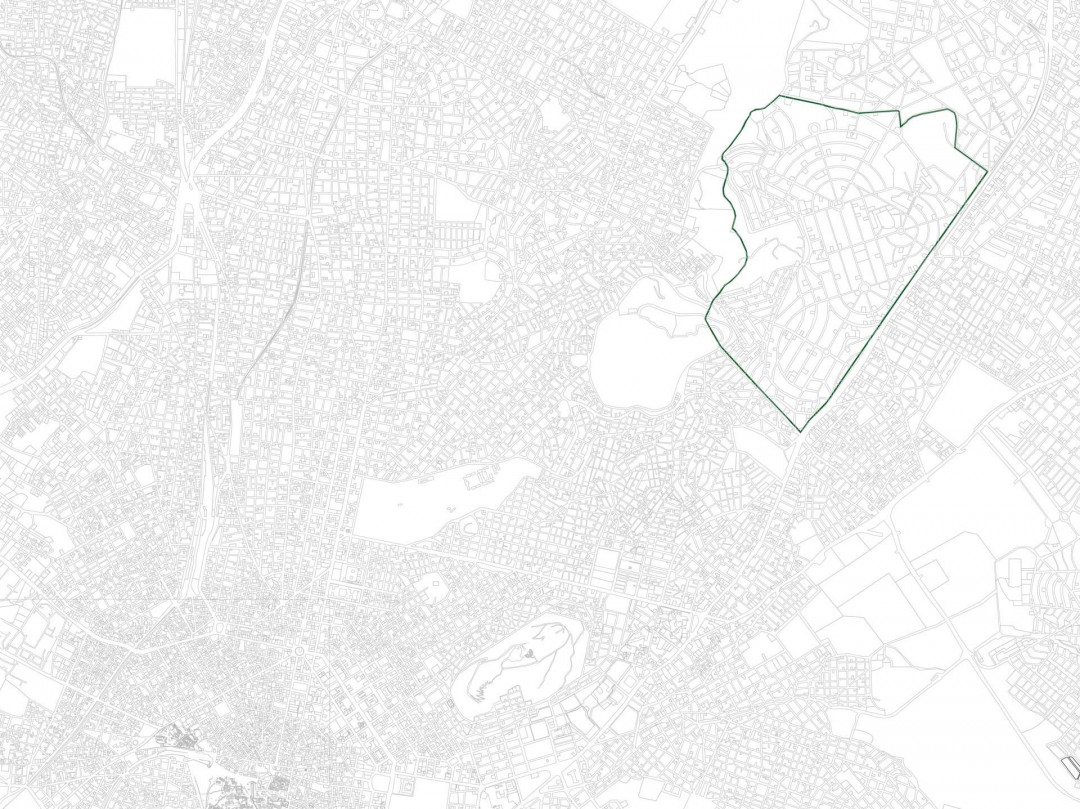 This article originally appeared in deca.gr

Greece
Biophilia
Garden
Archifynow
blog platform
ArchifyNow is an online design media that focuses on bringing quality updates of architecture and interior design in Indonesia and Asia Pacific. ArchifyNow curates worthwhile design stories that is expected to enrich the practice of design professionals while introducing applicable design tips and ideas to the public.
View Profile
More from archifynow 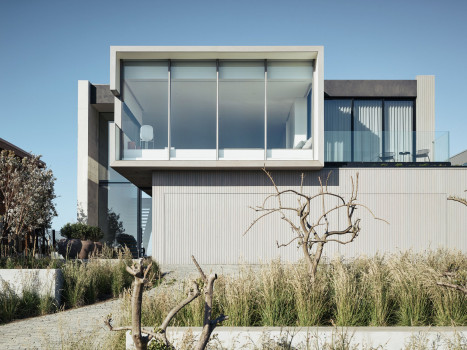 PROJECT - AUSTRALIA
6 MONTHS AGO
Blairgowrie Ocean Beach House
Perched on a sand dune on the ocean beach of Blairgowrie on the Mornington Peninsula, this home enjoys the views of both Bass Strait and Port Phillip. 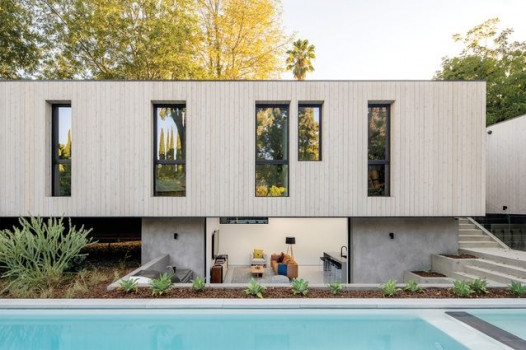 PROJECT - AUSTRALIA
2 YEARS AGO
Hot House: Bridge House
The house that marketing built: This Los Angeles home, perched above a running stream, was brought to you by… a truckload of brands. US-based architect Dan Brunn explores alternative business models around his own home life. 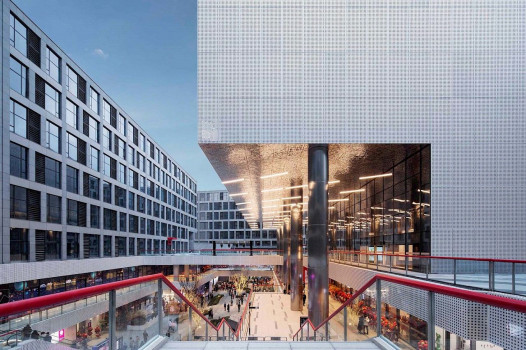