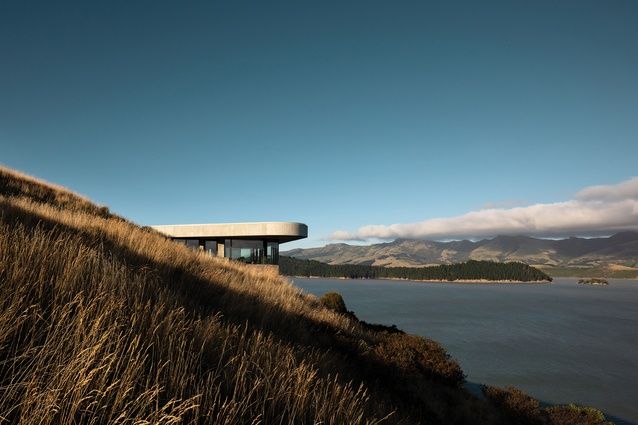 An exposed site with glorious views across Lyttelton Harbour called for a house with two very distinct zones, cloaked in a cantilevered canopy roof.

A site on a largely untouched headland in the sheltered and beautiful Lyttelton Harbour was a “once in a blue moon” opportunity for architect Jasper van der Lingen of Sheppard & Rout Architects to create “something really special” in this cliff-side house.

The location had recently been subdivided and was controversial, in that many of the nearby residents would have preferred to have the headland stay clear of houses, so the covenants on the design were challenging. The house had to be built below the sight line of the road above, in order for anyone walking along the road to be able to have a clear view of the glittering waters of the harbour. To make this happen on the steep site, the lower level of the house was built into the cliff. “The earthworks required were substantial,” says van der Lingen, “but it meant we could drill holes into the bedrock and truly anchor the house to the site.”

The excavated rock was then reused in the construction of the house. “We had geotech done and we knew there was rock close to the surface. The intention was always to use the stone as a cladding material but, until we extracted the rock and asked a stonemason to look at it, we didn’t know if it would be suitable. It is a volcanic rock that we were able to use for the stone walls.” 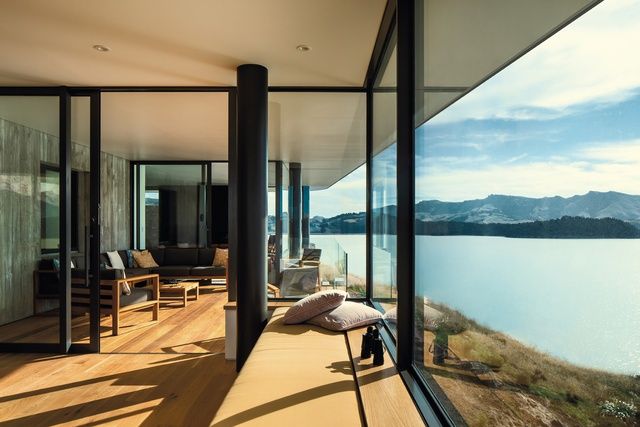 The living area on the upper floor opens to a central, sheltered loggia, which has teak flooring, chosen to reference boat-building. Built-in window seats provide a sunny spot from which to take in the view. Image: Jason Mann.

The lower level of the house contains the bedrooms and is designed as a kind of bunker: a place to retreat to and feel safe and enclosed. The views from these rooms are beautifully framed and this is in direct contrast with the views from the upper level, which are wide spanning and uninterrupted. Three distinct outdoor areas upstairs allow for different spots from which to drink in the vista, each protected from a different wind direction.

A cantilevered, substantial roof provides a canopy over the glazed upper level, which contains the living and kitchen spaces. “The roof is a slab itself and creates a thick horizontal line,” says van der Lingen. “The concrete edge picks up the buttresses, rock outcrops and horizontal striations in the landscape. We were very conscious of being sensitive to the controversy around building on the headland so we tried to downplay the design. We didn’t want to build a big white McMansion, clashing with the environment.”

The curve in the roof echoes the shape of the headland, and the rounded bays and island in the harbour. The roof was created to allow for a green roof to be planted at a later date. This made it a complex structure to build but the ability to anchor the house into the bedrock allowed for this amount of weight.

The overhang of the roof has the unexpected benefit of bouncing sounds up from the water below. “You get the pleasant sounds of people paddling in boats and the lapping of waves,” says van der Lingen. “Also, as it faces north, the overhang protects the house from the full summer sun but still allows the winter sun to shine through underneath.”

In terms of materials, the architect tried to keep the house as close to the colour scheme of the headland as possible. The formwork concrete elements allow for some roughness and texture and also downplay the joints in the fascia of the upper roof.

Inside, the house is mostly white and timber: a neutral palette that allows the view to take precedence. With the ground floor hiding behind the stone wall and the grand panoramic view, with the over-sailing roof above, this is a house that feels as though it has earned its place on the headland. 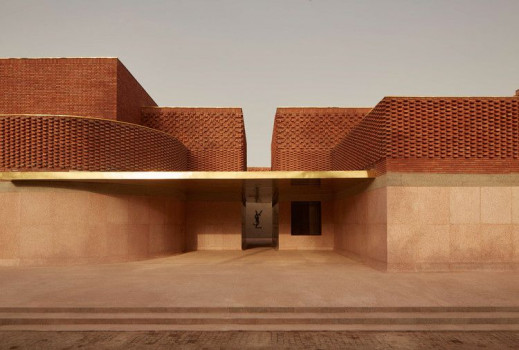 PROJECT - AUSTRALIA
1 YEAR AGO
Extra-ordinary
With brick as the predominant material, this house, designed by Benn+Penna, is like a contemporary rendition of an historic ruin, affirming the long-standing and much-deserved pedestal of brick in architecture. 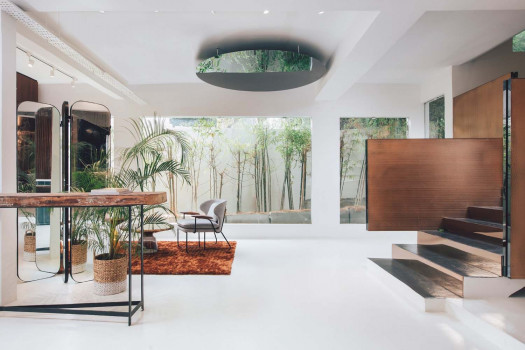 PROJECT - MALAYSIA
1 YEAR AGO
S/LAB 10 Refurbishes a Bungalow from the 1980s into a Vibrant and Dynamic Workspace
Among the typical home office buildings in Bangsar, Kuala Lumpur, the office of Mantab Group stands quite prominently thanks to its gleaming gold-coloured façade. Hovering over the second floor of the building, the metallic façade wraps the front-facing part of the building with its folded surface. Yet, in contrast with the grandiose façade, a modest and small timber finished box figure stands next to it, marking the entrance to the office.