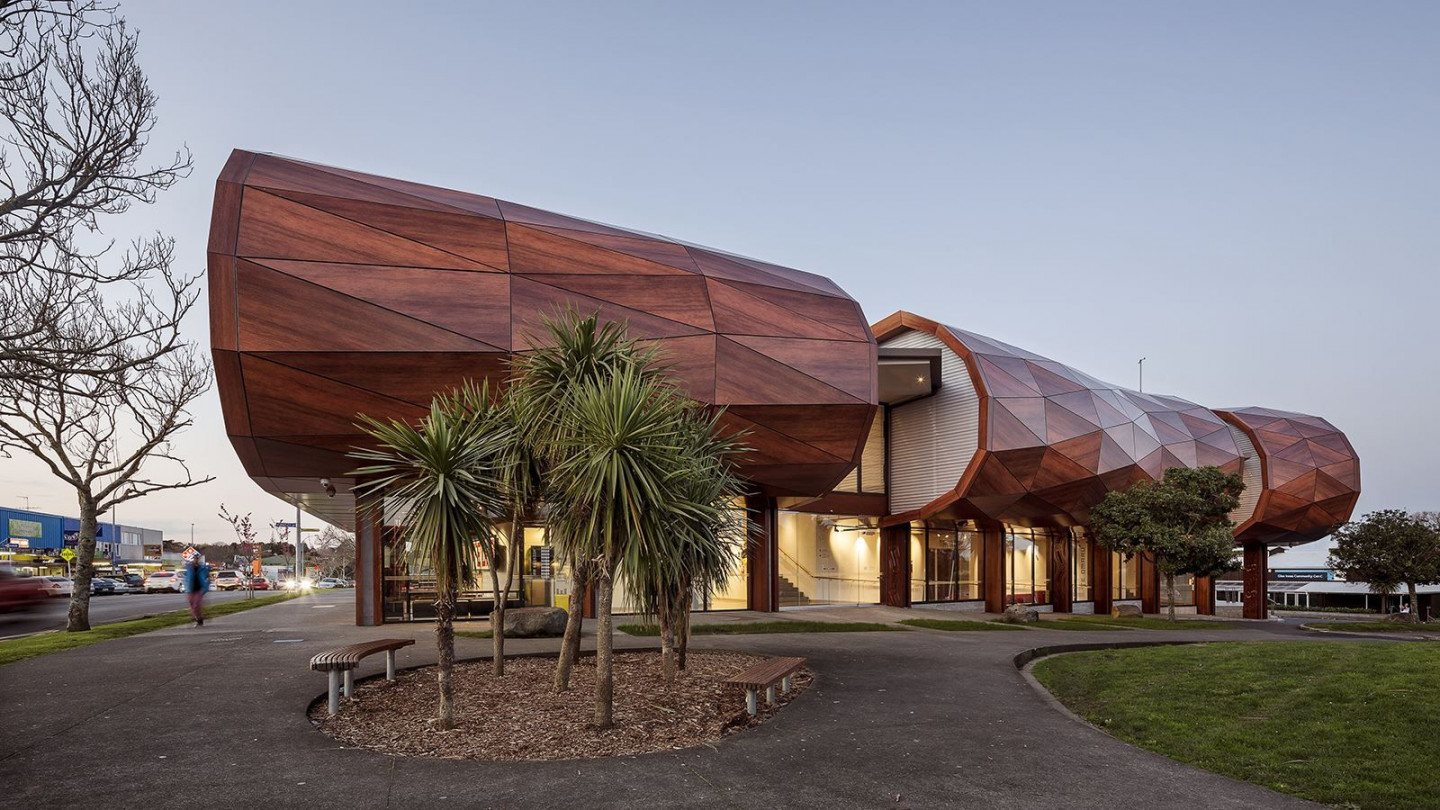 Te Oro is a public music and arts facility exclusively for young people, long sought by the ethnically diverse and creatively rich predominantly Pacifica communities of Glen Innes and Panmure.

The site terminates a slender “finger park” which follows a traditional pathway from the Tamaki River to the east, upward to higher ground. As the original agricultural area has been populated and built out, the park remains as a green connection between nature and the built environment of the Town Centre.

The building is located in a gritty suburban car park. The design team produced an Urban Design Master Plan for the whole precinct, which activates four key facilities in a cluster on the southern edge of the site – Te Oro, Ruapotaka Marae, Glen Innes library and a Community Hall – closely adjoining a landscaped “shared” space, yet to be completed. The proximity of these key cultural facilities was strongly advocated by the community, who characterised the assemblage as “a body of buildings”. In the future, the landscaped “shared space” will extend positively into Maybury Reserve through the demolition of two small adjunct buildings and the re-development of Ruapotaka Marae. 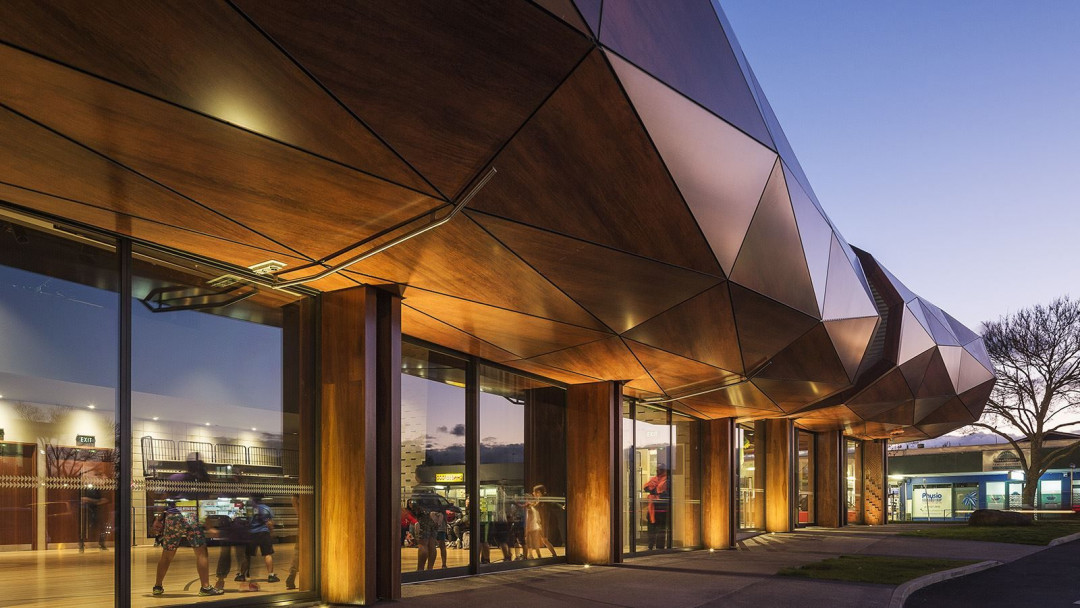 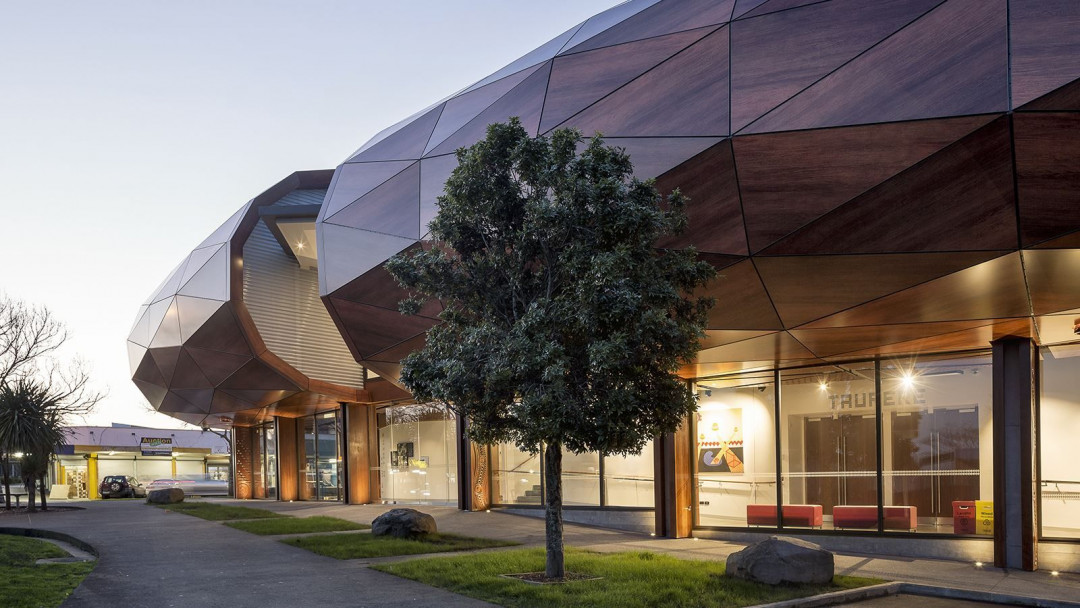 The project emerged from completely open consultation, where the active local community was empowered to make every decision possible. Archimedia worked in an extended team with local artists, a Maori cultural advisor, environmental engineers and landscape architects through open days and presentations to local schools and organisations, and a process where the community was invited into Archimedia’s studio weekly to participate in the design process. Archimedia also held open workshops weekly in the adjoining library so that all residents were empowered to contribute.

The design team sought a shared expression of identity, unifying over sixty local ethnicities, many of whom have their origins in the Pacific Islands. Identity was also sought in the european colonial name Glen Innes – the concept of “glen” as an island of space within a grove of trees – and from those ideas an “islands of identity” theme emerged. Most importantly, the site adjoins the Ruapotaka Marae, which is strongly associated with a traditional story linked to a grove of karaka trees on nearby Taurere / Mt Taylor.

From these histories and aspirations, the building was conceptualised as a natural arboreal canopy, under which learning and creativity could occur, with interiors strongly linked to the natural world.

The pavilion concept is informed by this metaphor and is composed of a tier of ground terraces, a floating superstructure and a transparent space between these elements within which human activity can occur. This configuration resonates within many cultures and also with tectonic architectural theory. 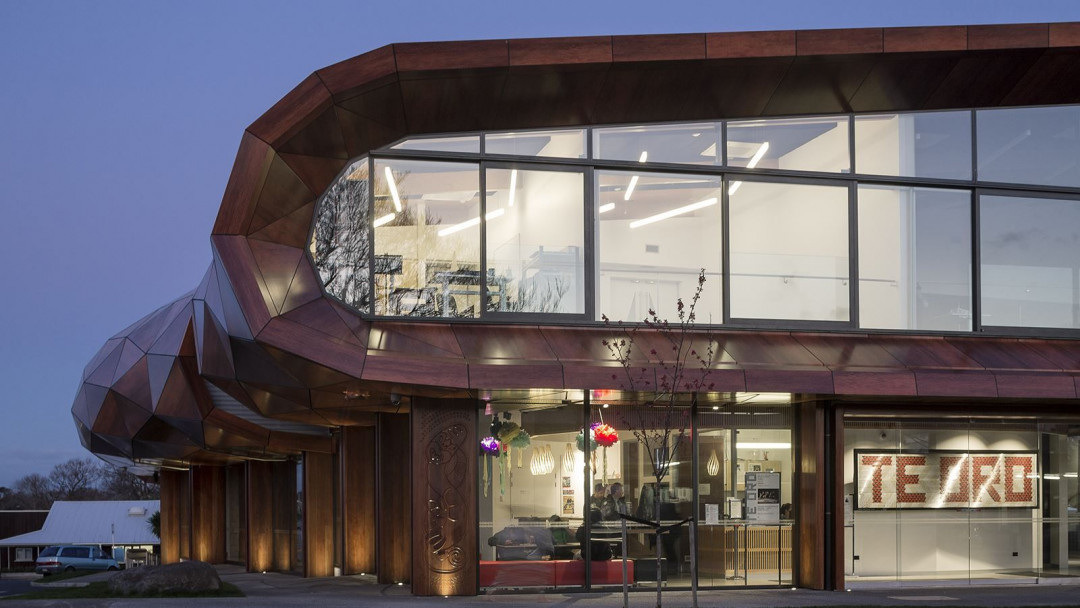 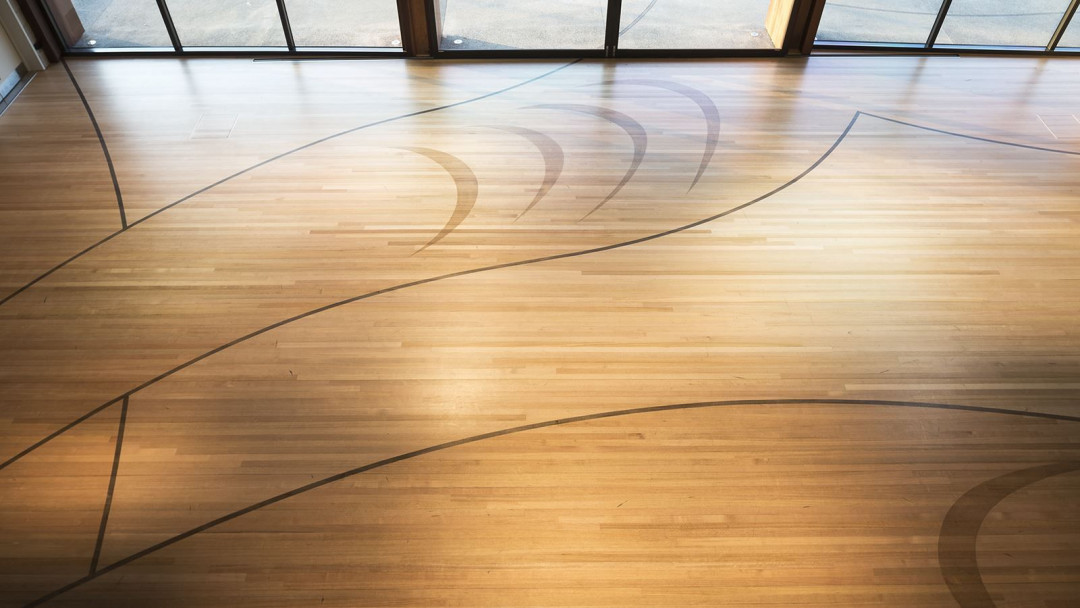 The programme includes hang-out and “kai” spaces, a 200 seat performance space which opens to the north – itself becoming a stage for outdoor performances with the audience in the car park (this was realised on Opening Day) – a workshop and teaching / performance terrace on the ground levels.

At the upper level are dance studio, music classroom, recording studios, digital editing suite, a beats studio, a bone carving and jewellery workshop, visual artist class rooms and studio, which also open to a balcony facing east across the park. All spaces are connected in a simple loop of circulation that visually connects users with as many activities as possible.

A traditional Maori graphic device – the manaia – is imprinted into the ground surfaces across these buildings and intervening spaces – drawing attention to the connections between facilities grounded in the heart, mind, hands and feet of the community. Te Oro responds to this anthropomorphic view of built form. It’s superstructure is separated into three separate elements that represent performance, music and visual arts. The organic plan responds to the street, to the Library and the existing Marae but also to the dynamic curve of the pathway between them.

The design of the ceiling and skylights in the voids between the separate elements references a leaf canopy with light filtering through from above. The diamond patterns represent the idea of Pacific Island “binding”, unifying the disciplines of traditional and contemporary visual art, music and performance. The lower modular frame is defined by a grid of paired concrete columns, faced with timber blades (carved by local ethnic groups) and the superstructure is created by a series of LVL portal “ribs” enclosed in a facade of ACP, developed specifically for the project. The facade is faceted, as if “adzed” from a solid timber log. 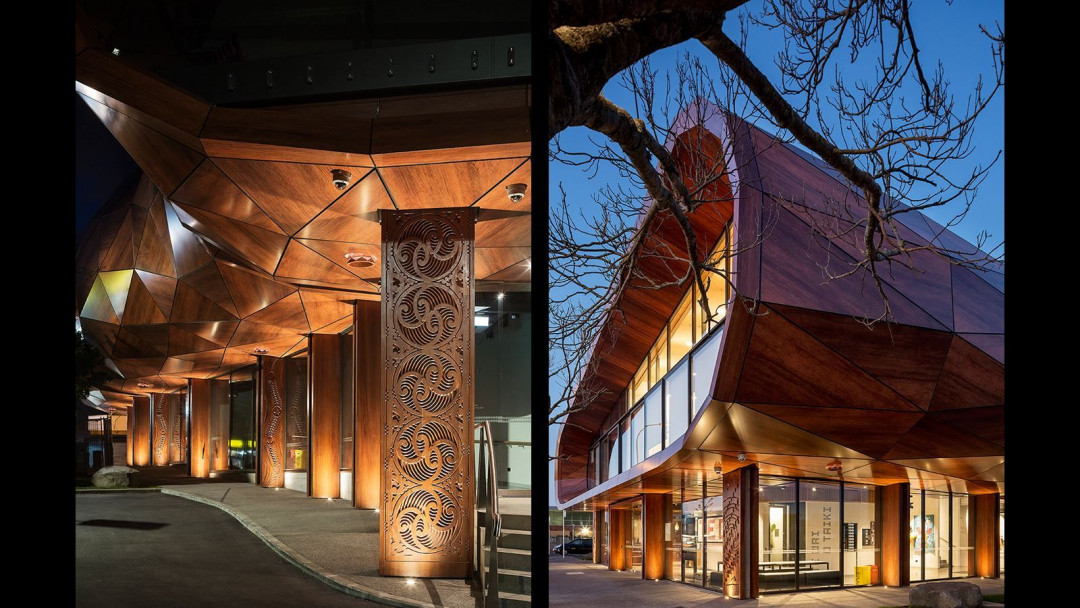 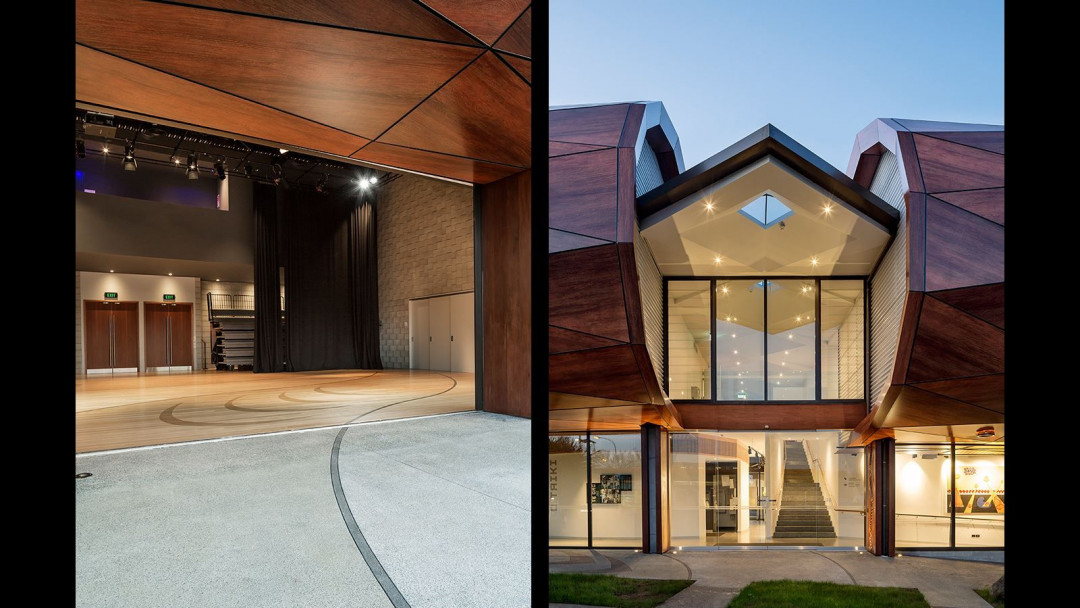 Local artists were commissioned to evoke the collaboration and engagement of mana whenua iwi and the Glen Innes community by creating “sound-sites” which combine sound, visual art and space through an assemblage of “sound cones”, CNC carved column panels and kowhatu. These sites create a space to listen, a space for ritual, for healing, for reflection and collectively celebrate the richness of local culture and history.

The project has a strong environmental agenda, including:

The entire upper roof surface covered in 256 PV panels, linked to the grid, which reduce electrical consumption by more than 50%; rain water is harvested and stored for toilet-flushing and landscape re-use; the facade creates an outer buffer zone excluding direct sunlight around a highly insulated interior and all windows are double glazed; low embodied-energy / carbon LVL timber portals were selected for the superstructure, in preference to steel; LED lighting and reverse cycle heat pumps. 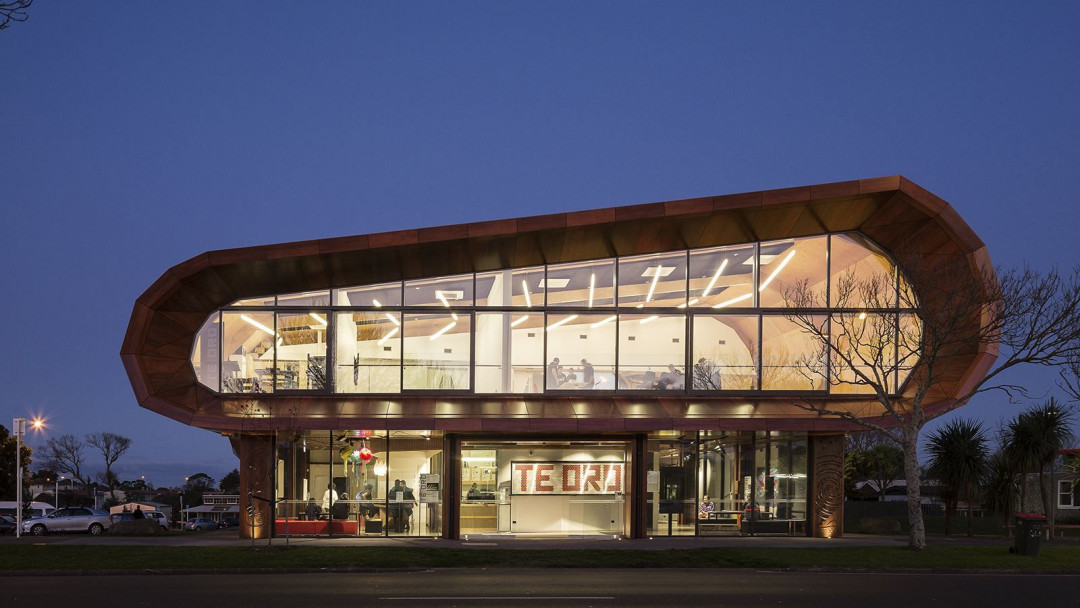 This article originally appeared in archimedia.co.nz

Pavilion
Auckland
Archifynow
blog platform
ArchifyNow is an online design media that focuses on bringing quality updates of architecture and interior design in Indonesia and Asia Pacific. ArchifyNow curates worthwhile design stories that is expected to enrich the practice of design professionals while introducing applicable design tips and ideas to the public.
View Profile
More from archifynow 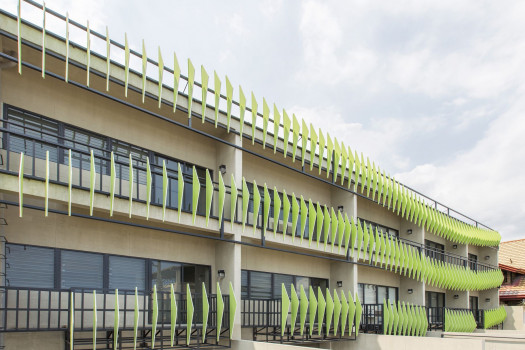 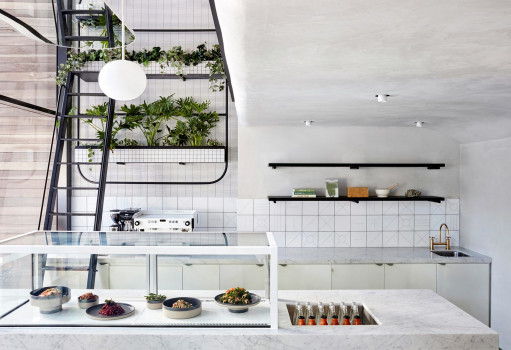 PROJECT - AUSTRALIA
2 MONTHS AGO
NAIM
In the heart of Brisbane city resides a modern Moorish inspired interior, Naim is designed with love for Syria. It is an interior tinged with nostalgia and hope. 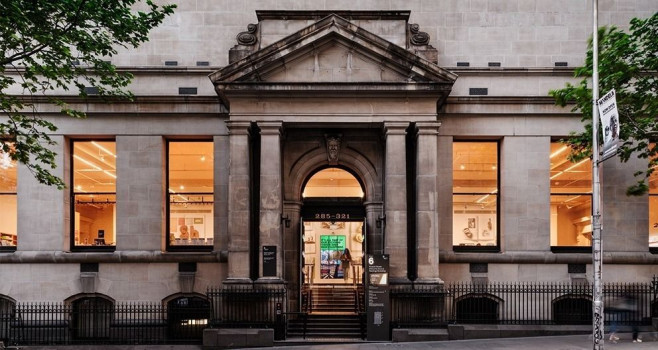 PROJECT - AUSTRALIA
9 MONTHS AGO
State Library of Victoria
State Library Victoria is one of our city’s most loved institutions. The Swanston Street landmark welcomes more than two million people every year, making it the busiest state library in Australia and the fourth most visited library in the world. It takes up a full city block and is comprised of 23 buildings that have evolved over the last 163 years. The Library is undergoing a once-in-a-generation redevelopment, Vision 2020, which will be completed by the end of the year.