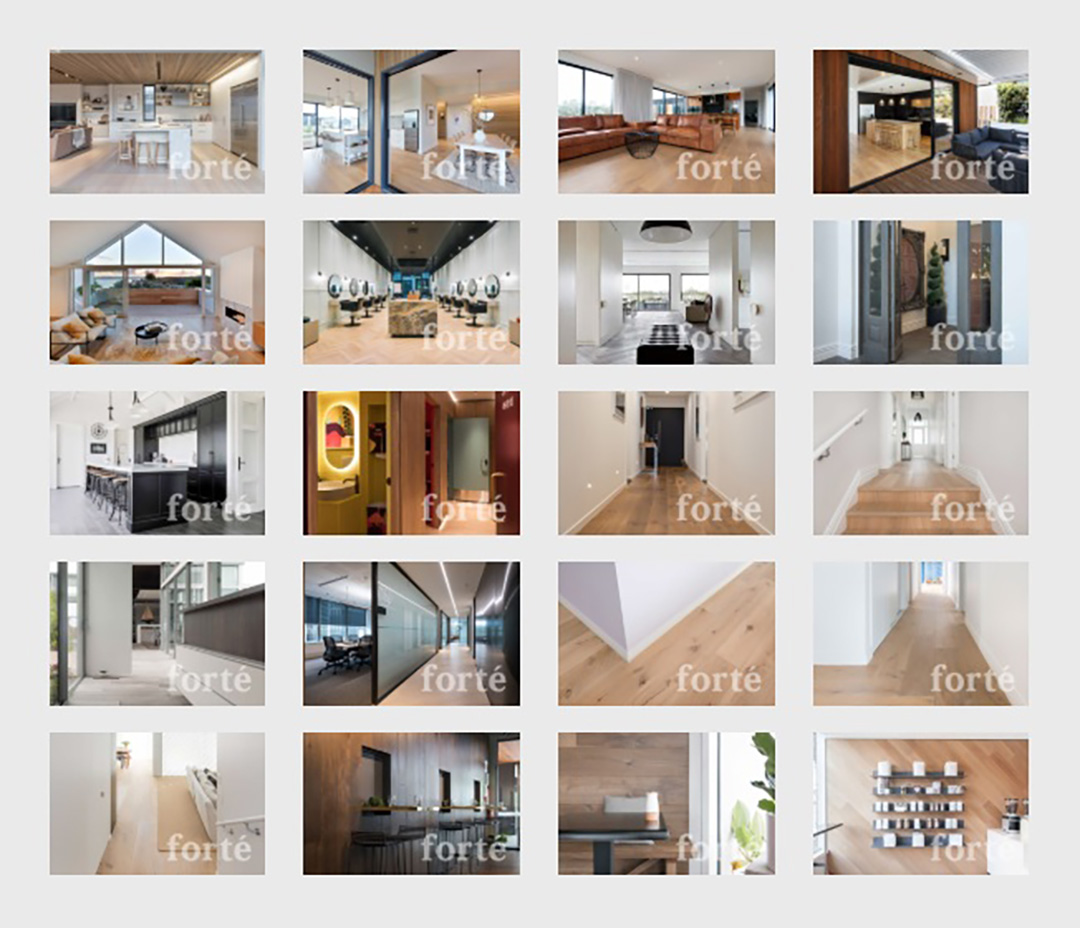 We believe that timber flooring looks most beautiful when viewed looking down the length of the plank - this allows your eye to travel seamlessly down the board and take in the beautiful grain pattern of the natural timber. Alternatively when the flooring is viewed looking across the width of the planks, the planks joints visually cut off your line of sight, making the beautiful pattern become less of a feature and the joints themselves more noticeable. This is especially valid when working with narrow plank flooring. It is also wise to take in account that flooring laid horizontally in a space will make it appear even wider, whereas if it is laid vertically the room will appear longer.

Your eye is naturally drawn down the length of flooring planks so you can use them to lead to a feature that you want to show off! Flooring can be laid strategically so that it draws the eye in the direction of a focal point. For example in a house with floor-to-ceiling windows and a stunning outlook you might choose to lay the flooring so that it leads your eye towards the view. You could also use flooring to lead your eye to a feature wall, a piece of art and so much more!

Plank flooring: You can choose to lay the flooring along the longest length of the room, or alternatively in the direction you will be most commonly be walking in the space. This will ensure you are looking down the length of the plank the majority of the time and are able to admire the beautiful grain pattern of the natural timber. If you'd like to make a feature of an area of your floor you can go against this advice and lay the planks on a 45 degree angle - this is a sure way to create a statement!

You may also like to consider how the flooring will meet with outdoor surfaces such as decking and whether you want it all to run in the same direction or to change between the indoor/outdoor spaces.

Herringbone & Chevron: Herringbone & chevron flooring planks are usually laid on 45 degree angles so that the two angles together point down the longest lengths of the room. To create interest or make an eyecatching statement, you can lay herringbone so the the planks are straight against the walls - this will visually create more of a squares effect rather than an arrows effect.

Plank flooring: When laying flooring throughout a series of rooms we recommend considering where the doorways are and how people will move throughout the space. Where possible it is good to keep the floor running in the same direction as too many changes can make the space look busy. However it is entirely possible that somewhere in a plan you'll come up against some adjoining spaces or rooms where the timber flooring may need to change direction.

Scenario 1 - An open-plan area where the room splits off on an angle. We suggest to have the planks mitered so that they meet at a point where the angle of the room changes. You could also have a plank border installed between the two angles if you wish to define between the areas (see photos for an example).

Scenario 2 - Rooms off hallways or adjoining rooms. Here we suggest installing a plank border across the doorframe to help define and separate the spaces (see photos for example).

Herringbone & Chevron: Where at all possible it is recommended to keep herringbone flooring running in the same direction as any direction change will make things look busy. For smaller or adjoining spaces you may like to switch from Herringbone to a matching plank to avoid the space looking too busy.

Plank flooring: In long narrow spaces such as hallways we recommend laying the timber flooring planks down the longest length of the room. This will ensure you are looking down the length of the plank the majority of the time and are able to admire the beautiful grain pattern of the natural timber. If you do wish to lay planks horizontally across a hallway we recommend using a wide planks for the best effect. Again, if you want to make a feature of your hallway floor you can go against all previous advice and lay your plank flooring on a 45 degree angle - this is a sure way to create a statement!

Herringbone & Chevron: In long or narrow spaces we recommend to lay chevron or herringbone planks at 45 degree angles so that the two angles together point down the longest lengths of the room.

Plank flooring: If you come across a corner (for example in a hallway), you could will probably want to adjust the direction of your flooring to suit. One way you could do this is by mitering the planks so that the ends meet perfectly at the corner. Alternatively, a weave-type effect could be used where the straight ends of the planks run into each other alternately at the corner (see photos for example).

Herringbone & Chevron: If you come across a corner with herringbone or chevron flooring we recommend continuing the flooring in the same direction - any change is going to disrupt the pattern and create a negative visual distraction - not to mention make the flooring look busier than it already is.

Plank flooring: Odd-shaped rooms can make it quite difficult to determine which way to lay your flooring. Generally we suggest either laying the planks down the longest length of the majority of the area, or in the direction that people will mostly be walking. You will usually want to line the flooring up with at least one straight wall if possible.

Plank flooring: Planks are most commonly laid across the tread of the stair. However in some cases, for example in a hallway with a small flight of stairs, you could opt to have the stairs laid down the tread so as not to interrupt the line of sight.

Herringbone & Chevron: We don't recommend installing herringbone or chevron on stairs unless you want to drive your installer crazy!

Timber can also be laid on walls to create a stunning tactile feature. Planks laid horizontally on a wall or will make the wall appear wider, while if laid vertically the wall will appear higher. Planks laid diagonally will make a stunning statement and draw extra attention to the wall. You should consider the direction of the flooring in the room and how it works with the wall- running the feature wall parallel to the flooring will result in your eye being drawn down the planks and straight to the wall, whilst laying perpendicular will create an entirely different effect.

If you need any help with what direction to lay your flooring, feel free to send a copy of your plans to [email protected] and one of our experts will be in touch to discuss!

Forte
New Zealand
Who are FortéForté are a third-generation family business, supplying an exceptional range of timber flooring, decking and wall covering products throughout New Zealand and Australia. We have the largest stocked range of timber flooring in NZ and offer free samples delivered nationwide. Our product range is inspired by the latest global flooring trends and our brands are all exclusive to Forté in NZ. With over 35 years’ experience in the timber industry, we are widely recognized as the experts in our field."Forté - The Timber Flooring Specialists"What We DoWe are committed to providing an exceptional range of timber flooring, wall coverings and decking products that are stylish, innovative and of very high quality. We are constantly scouring the globe in search of new and upcoming timber trends and working with our suppliers to translate them into products that New Zealanders will use and love. We also develop bespoke products for clients to suit their exact requirements.We work alongside clients on their projects, assisting them every step of the way from product recommendations and measuring plans, through to delivery and installation, to ensure their dreams are brought to realization. We also provide unparalleled knowledge, advice and technical support to ensure the right products are purchased for the job, the required specifications are met, the products are installed correctly and finally, cared for and maintained correctly.Why Choose Forté?Trusted & Proven SupplierForté are a New Zealand owned and operated company. We have been in the industry for over 35 years and in this time have earned an excellent reputation as a trustworthy and reliable supplier. Check out our Testimonials page and search our Google reviews to see our customer feedback!Exclusive Brands, Unlimited Product OptionsOur brands are exclusively distributed by Forté in New Zealand and cannot be purchased from other importers. We are proud to have NZ’s largest stocked timber flooring range - thanks to this we are able to quicker turnaround times than many of our competitors. We also have a large number of speciality products, which are available by indent. And if you still can’t find what you want, we can work with you to design your dream bespoke timber flooring or wall coverings!Free SamplesWe ship samples all over New Zealand free of charge, because we understand that there's nothing quite like seeing the product in situ to help you make a decision!Expert Knowledge and SupportWith over 35 years’ experience in the timber industry, we have a wealth of knowledge that only experience can provide. From product enquiry, to technical questions, to after-sales support, we are there for you every step of the way.Committed to QualityOur products are extensively tested before they go on the market. We only supply quality products and we only buy from trusted brandsOutstanding ServiceOur customer support team go the extra mile to ensure your project runs smoothly. From measuring plans, to answering technical questions, to getting the product delivered on time, we always strive for complete customer satisfaction!Environmentally ResponsibleAt Forte we committed to minimizing our environmental impact and ensure our practices are sustainable.
More Updates