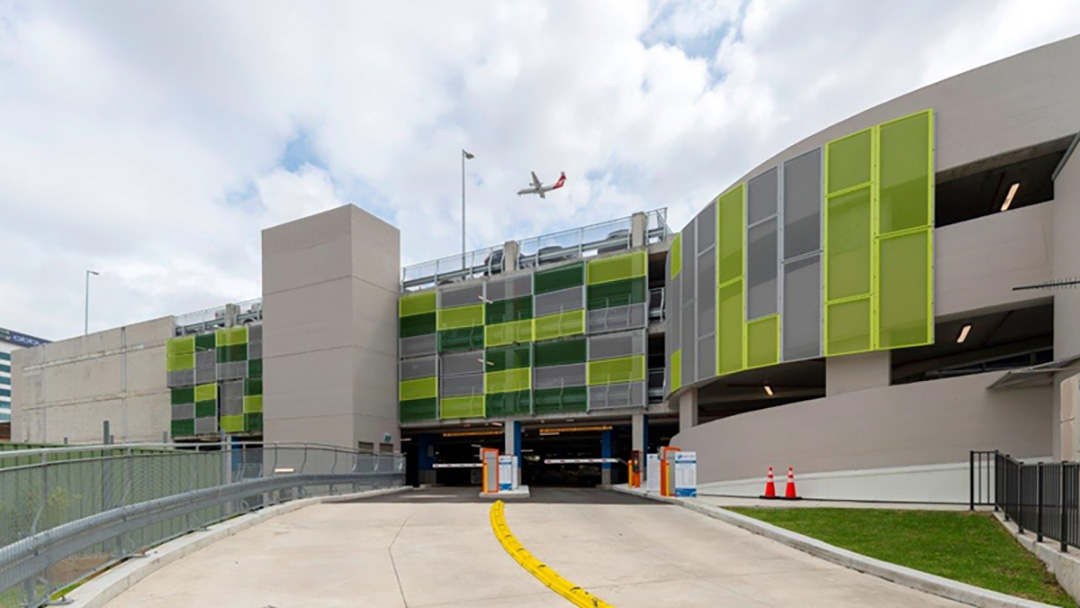 Located in Mascot, in Sydney's Inner South, this carpark services a busy commercial area and, of course, Kingsford Smith airport. Locker was delighted to assist Vanovac Tuon Architects and Taylor Construction in bringing it to life.

In this case study, we'll examine how the project unfolded, and how Locker worked with its partners to produce a stylish and functional end result.

From the get-go, Vanovac Tuon had a clear vision for what they wanted to achieve, and Locker was brought on board to provide perforated panels for two elevations of the carpark's facade.

The architects desired the facade to have an articulated effect, with a mixture of flat and angled panels.

The open area – The design called for perforated panels with an open area greater than 50 per cent. While not an exact science, when this threshold is reached with perforated metal, a Carpark often won't require mechanical ventilation to be included in its scope. This makes the final structure significantly more economical to run.Two aspects of the brief were of particular importance:

As we'll see in the next section, the second part of this brief threw up some unique challenges for our team. However, the project benefited from close collaboration between all parties at each stage. Sketches and pre-prepared models from our designers ensured that everyone was on the same page from briefing through to installation.

With such clear objectives in the brief, the product choice was simple – Clarity 800 perforated panels. With 7.94 mm perforations staggered at 9.53 mm centres, this product more than satisfied the ventilation requirements of the project, providing an open area of 62 per cent. In total, over 230 Clarity 800 panels were used to create the facade of King St. Carpark, with some coloured green and yellow to lend the building vibrancy and help create its individual identity.

In total, over 230 of Locker's Clarity 800 panels were used in the facade of King St. Carpark. 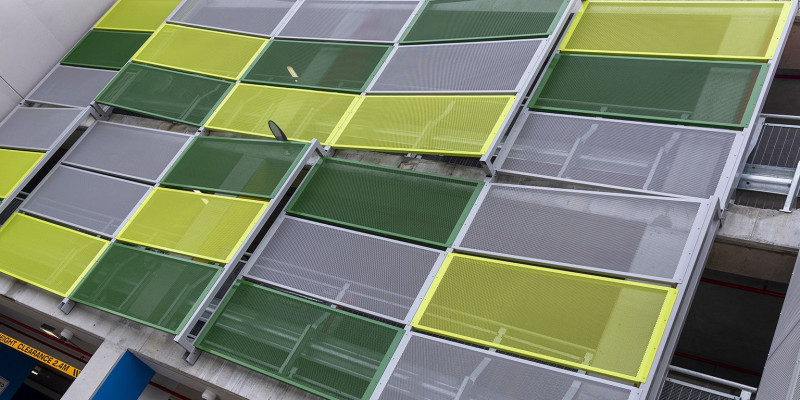 Custom U-brackets were chemically anchored to the slab and some of the upstands of the carpark facade in order to form a base connection. The challenge, however, came in how to articulate the perforated panels while maintaining a degree of uniformity for manufacture and drafting.

Ultimately, the solution to this problem involved connecting the closest point of the panels to a single rectangular hollow section (RHS) that spanned the space between the slabs. This was used in conjunction with ladder frames placed between every other vertical. In other words, if you look across the facade there's a repeating pattern of single RHS, double RHS (welded together), single RHS, double RHS, and so on. This approach made the project a lot easier at all stages of development, from drafting to installation, while still achieving the intent both aesthetically and structurally.

At Locker, we typically prefer to use aluminium over steel for support framing.

The outcomeAt Locker, we typically prefer to use aluminium over steel for support framing, something that sets us apart from many other product suppliers in this space. The reasons for this are twofold: Primarily, aluminium is between two and three times lighter, making it less labour intensive to install. Secondly, thanks to a protective oxide layer that naturally forms when aluminium is exposed to air, it's more corrosion resistant than steel.

As Sydney's largest off-airport carpark, King Street is an exciting addition to Mascot's list of amenities. The first stage of development made space for 750 parking spaces, while the finished build will have room for a staggering 1,622 vehicles.

For our team, the real satisfaction came in designing a solution that allowed our perforated panels to be installed with no hassle, and in line with the architect's brief. This involved input at all levels, from designers to installers, and careful coordination from project management. The close working relationships with both Vanovac Tuon and Taylor Construction was also crucial in ensuring this build ran smoothly and achieved its goals.