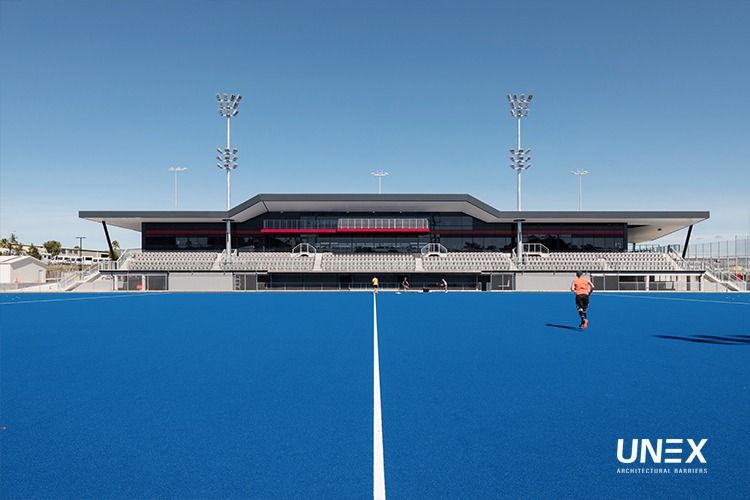 When designing sporting facilities, along with accommodating the needs of the sport or sports that will be using them, the paramount concern is spectator safety, with stringent laws being enacted following a number of preventable tragedies at international sporting arenas in the latter half of the 1980s.

Adherence with safety codes has not always allowed for aesthetic considerations but a unique product from UNEX is an ideal solution to public spaces and crowd control. The X3000 series is part of the UNEX Extreme Barriers range, which has been specifically engineered to comply with the building code classes required for public and crowded areas. The series is available in a framed baluster or framed glass option and is ideal for use in sporting facilities grandstands.

Most recently, the framed glass option was installed at the new National Hockey Centre, a $75m facility in Albany on Auckland’s north shore. The main stand has capacity for 450 spectators so the X3000 series was specified as it has the highest load rating of any aluminium balustrade - capable of withstanding greater than 3kN of sustained force, or the same as if all 450 spectators were to hit the balustrade at the same time.

A perfect blend of form and function

The hockey centre will be home base for North Harbor Hockey—which boasts 8000 members—and has been designed to world-class standards, hosting its first international matches in February this year as part of the FIH Pro League, a qualifying tournament for the Hockey World Cup and Olympic Games.

Given its high-profile status as an international hockey venue, it was also important that the balustrade not only lived up to safety standards but provided minimal disruption to sightlines and had a clean, contemporary aesthetic. Again, the X3000 series was the obvious choice as it features a 90mm-wide span and a slimmer profile over its X1500 series stablemate. The top rail and posts were given a Silver Pearl powder coat finish, which when viewed at a distance almost vanishes yet up close is an elegant choice. A stainless steel handicap-accessible handrail and handicap-assist hoops were also installed.

Away from the grandstand: other uses for the X3000 series

The National Hockey Centre was nowhere near the largest install we’ve done but at 170 lineal metres, it was one of the biggest at that strength. We have installed the UNEX X3000 in other sporting facilities around New Zealand and Australia, including public swimming pools, gymnasiums and also at the Outrigger Resort in Fiji. It is also ideal for shopping and retail centres, school gymnasiums, theatres and bars, restaurants and cafes.

Also, while it’s certainly over-engineered for most standard residential projects, we have had clients who are building in high-wind zones who have requested it because of its wider span, which, when specified in the framed-glass option, does make for greater access to views.