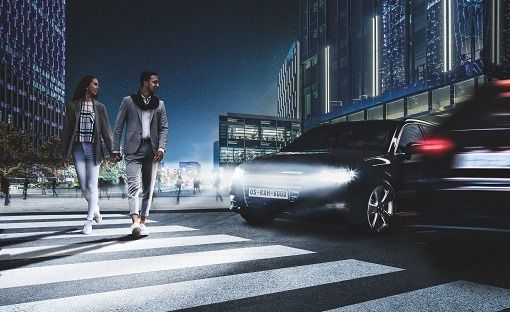 Osram is the first manufacturer to offer approved LED-based automotive retrofit lamps for the German market. This development is an absolute novelty, as there have been no legal LED replacement lamps for headlight applications until now. With its new product, the number 1 company in automotive lighting is the first supplier to meet the strict approval regulations. "Road approval is an important step that we have been working towards for years. With our LED lamps, drivers can upgrade their halogen lighting to the latest state-of-the-art products legally, easily and cost-effectively," says Hans-Joachim Schwabe, CEO of Osram Automotive. With Osram Night Breaker LEDs, drivers benefit from significantly improved vision and visibility on the roads.

The LED began its triumphal march into full headlights many years ago, but only in new cars, which is often considered standard today. With the new Osram Night Breaker LED, a manufacturer is now offering approved LED replacement lamps for halogen front headlights in used cars for the first time ever.

The Night Breaker LED H7 from Osram is the first LED retrofit lamp to pass the extensive test procedures of TÜV Süd, making it a legal replacement for H7 halogen lamps in tested vehicle models. This is confirmed by the German Federal Motor Transport Authority with the granting of the road approval. Currently, the approval covers low-beam light found in many common vehicle models that are registered in Germany. These include popular models such as the BMW 2 Series, Audi A3 and A4 or Ford Mondeo. The number of vehicles is constantly being expanded through ongoing tests and approval procedures.

The new Night Breaker LED is up to three times brighter than the minimum legal requirements and is comparable in color to daylight. The lamp creates strong contrasts and a long range.

Thanks to LED technology, the lamp shines up to five times longer than a comparable halogen version, requires less frequent replacement and consumes less energy. Lamps can be changed from halogen to Osram LED without any remodeling measures and with a certain amount of expertise. With a recommended retail price of 129,99 euros per set, they are a cost-effective retrofit alternative to LED headlight systems.

Osram
Germany
OSRAM, based in Munich, is a leading global high-tech company with a history dating back more than 110 years. Primarily focused on semiconductor-based technologies, our products are used in highly diverse applications ranging from virtual reality to autonomous driving and from smartphones to networked, intelligent lighting solutions in buildings and cities. OSRAM utilizes the infinite possibilities of light to improve the quality of life for individuals and communities. OSRAM’s innovations will enable people all over the world not only to see better, but also to communicate, travel, work, and live better. As of the end of fiscal year 2018 (September 30), OSRAM had approximately 26,200 employees worldwide. It generated revenue of more than €3.8 billion from continued operations in fiscal year 2018. The company is listed on the stock exchanges in Frankfurt and Munich (ISIN: DE000LED4000; WKN: LED400; trading symbol: OSR). Additional information can be found at www.osram.com.
More Updates