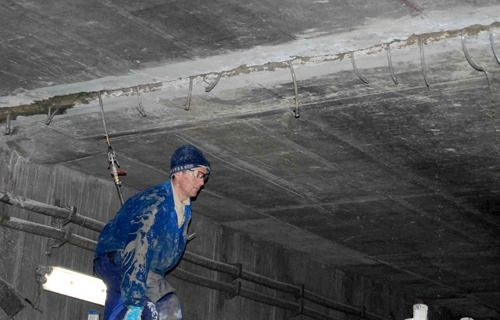 The Izvor Station on the M1 (Yellow) and M3 (Red) lines of the Bucharest Metro is in the middle of the city: close to the Palace of Parliament, Bucharest Veterinary University, Gheorghe Lazar High School and Cismigiu Gardens. The station is part of the first Bucharest Metro line built in what was once the Izvor neighborhood on the right bank of the Dambovita River.

Being a shallow construction, Izvor station does not feature a vestibule. Instead, all ticketing machines are located on the track level, positioned centrally in the station. The south- and northbound platforms are connected by a single passage that runs beneath the tracks.

Opened on November 19, 1979, Izvor station was in operation for 35 years when water leaking through some of the construction joints in the tunnel section increased noticeably during rainy days. The situation became so severe that repairs were scheduled.

The renovation work included opening and cleaning all treated joints. As a next step, holes were drilled into the joint to insert injection hoses. All surrounding areas were repaired with PENEPLUG, a fast-setting, crystalline repair compound. PENETRON INJECT was then injected under pressure into the concrete. Once PENETRON INJECT had set, all injection points were sealed, and the joint surface was covered with two coats of PENETRON.

Despite the challenging underground environment at Izvor station, all leaks into the tunnel were permanently stopped. 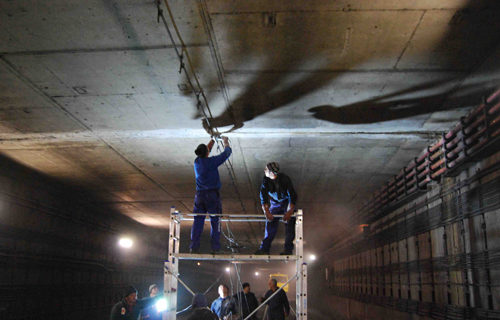 Penetron
United States
Founded in the late 1970s, PENETRON developed cementitious waterproofing products and additives to create an optimal crystalline technology. Today, the PENETRON system of products is sold around the world in over 60 countries through qualified applicators and distributors.The know-how and experience gained over the past 40 years has enabled PENETRON to offer a broad range of concrete solutions, including crystalline waterproofing, waterstops and liquid sealers. The PENETRON system has been proven effective on countless major projects worldwide. The technical excellence of the products and a knowledgeable and dependable team of people have made the company the industry leader.Our CompanyMETTLE SHIELD SOLUTIONS INC. was established in April 2016. Our goal is to provide both superior customer experience and distribute products that are cost effective, efficient and environmentally friendly. It started as a Distributor of GMA Garnet Australia.Mettle Shield Solutions Inc. ensure availability of stocks, timely delivery of our products, and we make sure that ALL products that we offer are of high quality, trusted and proven effective.Core ValuesWe, at Mettle Shield Solutions Inc. (MSSI) embody the following values:M ettle - we have the ability to perform complex projects.S afety - is our top priority as we are committed to everyone’s well-being.S ustainable - we promote products that are environmentally friendly and will provide excellent result.I ntegrity – we adhere to integrity, reliability, honesty and business ethics in all aspects of our business.VisonTo be the leading Company in the Philippines in Waterproofing, Sandblasting and Painting needs, partnering with diversified clients in protecting their investment from water leakage and corrosion.MissionTo build a long-term relationship with our International Suppliers & Manufacturers, customers, clients and sub – distributors through exceptional customer service and quality workmanship.To carry excellent product lines in Waterproofing, Sandblasting and Painting Industry that are proven to be effective, cost efficient and environmentally friendly.
More Updates