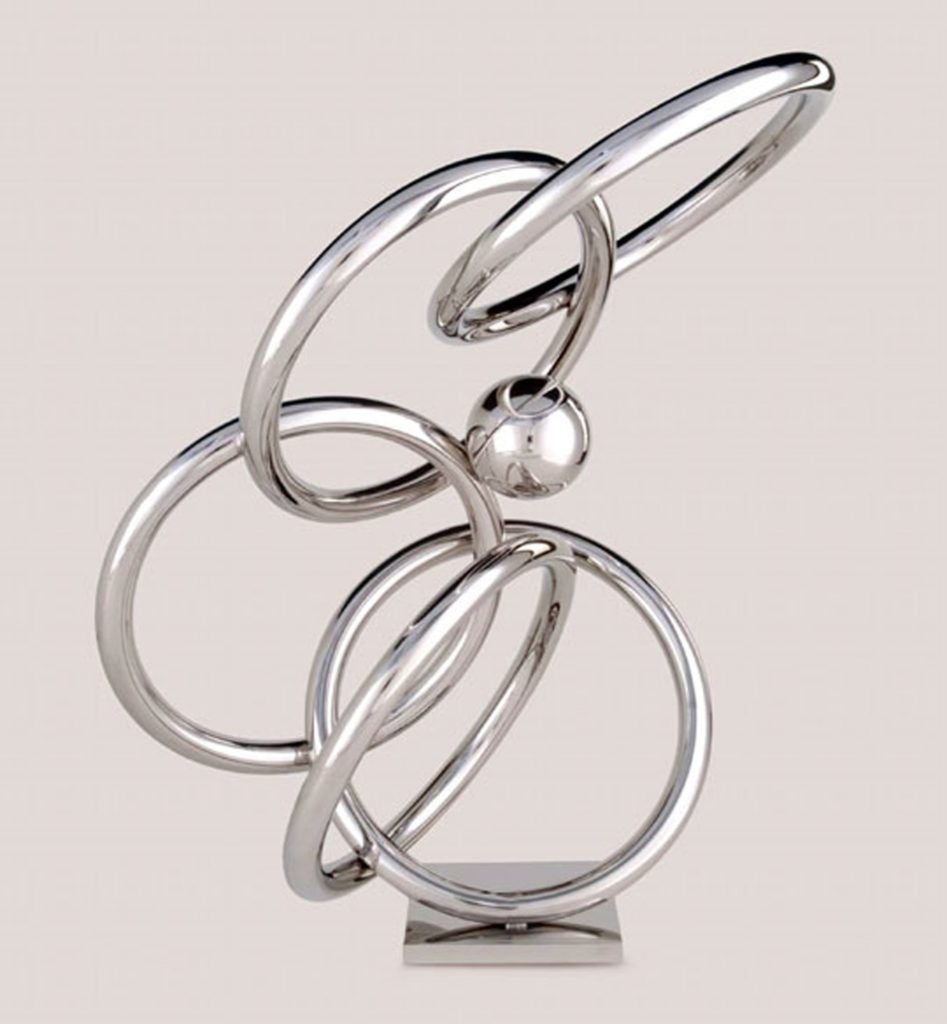 What would a prolific, multi-awarded Filipino stainless steel sculptor, Jose “Joe” Datuin still aim for after winning the Grand Prize in International Olympic Committee Sport and Art Contest Sculpture Category at Lausanne, Switzerland in 2008?  His winning piece, “Dancing Rings” where to this day is on display at The Olympic Museum in Lausanne bested 35 countries around the world at that time.   Such a prestigious award is already a remarkable feat and any artist would have stopped and retired after bagging such an accolade.

His Youthful Spirit Makes him Timeless (like stainless steel)

With a twinkle in his eye and the perpetual grin on his face which speaks of hope and triumph, Joe candidly said,  “I have so many dreams to fulfill!  Next month, I have to conquer the Venice Art Biennale.”   And right away, he brought us near his latest masterpiece, “The Ring” which is his entry to the world’s most prestigious international art festival, 57th Venice Art Biennale 2017 theme, Anima Mundi, from May 13 to July 02, 2017 in Italy.

During the interview in his home in UP Village, Quezon City, Joe walked us through the significance of the skull and the swathe of amulets around the huge stainless steel ring. These represent the Filipino’s colorful religiosity harking back to the pre-colonial times when our great ancestors prayed to the spirits.  He brimmed with so much confidence and enthusiasm that he will bring home the bacon again with this original entry, a product of months of research and reflection that will dovetail with the art festival’s Anima Mundi theme on Rituals.

Jose “Joe” Datuin has carved a name for himself and for many decades his tireless effort and dedication bore fruit.

With his artistic passion and characteristic penchant to use materials that will last a lifetime, he gravitated so easily towards the medium of stainless steel.  It didn’t take him long to discover its finest qualities.

“There is something magical and vibrant about stainless steel especially the grade 304.  Its flexibility had allowed me to express art in a most dynamic, self-absorbing way that I come out of the experience very inspired.  Perhaps it’s this light feeling brought by the medium that I am able to make great art through its simplicity.”

A Renaissance Man in the Making

There is no denying that Joe’s pioneering work in the medium helped propel stainless steel as a viable medium.  It also molded for him a place in the Philippine contemporary art scene as evidenced by inclusions in many prestigious events and projects such as:

Joe was educated at the Fine Arts program of the University of Santo Tomas where he had a first taste of joining and winning in art competitions.  And while the two other Thomasian sculptors most associated with him, Ramon Orlina and Eduardo Castrillo, worked with glass and brass and bronze, respectively, Joe is known for his perfecting his craft through the use of stainless steel.

When probed further on his other projects lined up after he returns from Venice, he said he plans to popularize this medium and immortalize his works and art in general by elevating them in public places, at the great outdoors as only stainless steel — and perhaps even Joe Datuin’s legacy — is able to do, enduring the test of time.

Sanyoseiki
Philippines
Sanyo Seiki Stainless Steel Corporation is the  top manufacturer of  stainless steel in the Philippines.  It answers the ever increasing demand and 21st century’s indispensable need for high quality, reasonably-priced stainless steel products for many industries.It first began as MCC Industrial Sales Corporation that was established by Pablo Chan as a trading firm  that pioneered in selling stainless steel in the Philippines in 1972.Years later, his son, Gregory, integrated the trading firm that his father started but this time focus on manufacturing.  This market expansion motivated him to build several plants  to cater to a bigger clientele.  When it was registered at the Securities Exchange Commission on January 18, 1995, Sanyo Seiki Stainless Steel Corporation was born.   From then on it had focused on giving high quality stainless steel products to various customers  through the channel of  hardware stores.  Amidst the economic challenges,  the company built a harmonious relationship and trust with its customers in thoroughgoing business partnerships for more than 25 years.
More Updates