FUSION OF THE ARTS 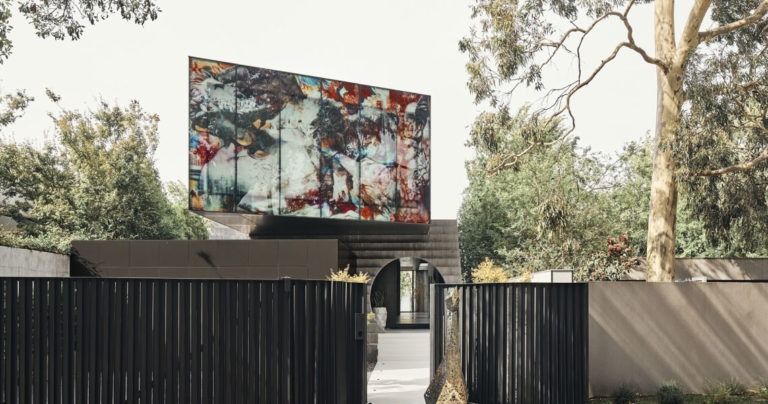 JARtB residence – part house, part gallery – located in the conservative inner Melbourne suburb of Toorak, embodies a bold interdisciplinary approach to design and construction, integrating arts into the build. Drawing inspiration from the baroque movement, the residence fuses past ideology with contemporary design language, and reinstates the forgotten role of an architect as an artist and a craftsman.

Billy Kavellaris is the managing director of KAVELLARIS URBAN DESIGN (KUD). He has led his team of architects to complete single residential dwellings, high-density residential, public and commercial buildings and major high-rise developments. Currently, the KUD team is working on an international museum in the Melbourne CBD. Billy has taught at the University of Melbourne and has also been a guest critic at various universities.

JARTB PROJECT IS YOUR OWN HOME – WHAT CONNECTION DOES AN ARCHITECT HAVE TO A PROJECT WHEN THEY ARE ALSO THE OWNER?

BILLY KAVELLARIS : It’s very different. There’s a lot of emotional investment attached to the project. [It is] much more difficult to design because you’re always striving for perfection. Something, which really doesn’t exist to be perfectly honest. I have been gathering ideas and pieces of art for a number of years, and I started designing the house about 4 years ago in Mexico on a vacation with my family on the beach.

WHAT DID YOU GET FROM THE EXPERIENCE OF BUILDING YOUR OWN HOUSE?

BILLY KAVELLARIS : It was stressful! What I did get is that you have a direct connection with the people who were executing the ideas onsite with construction methodologies. That direct intimacy and contact enables you to have full design control and also not have any interpretation of what your aspiration is. But also learning from people who are experts in their respective fields. 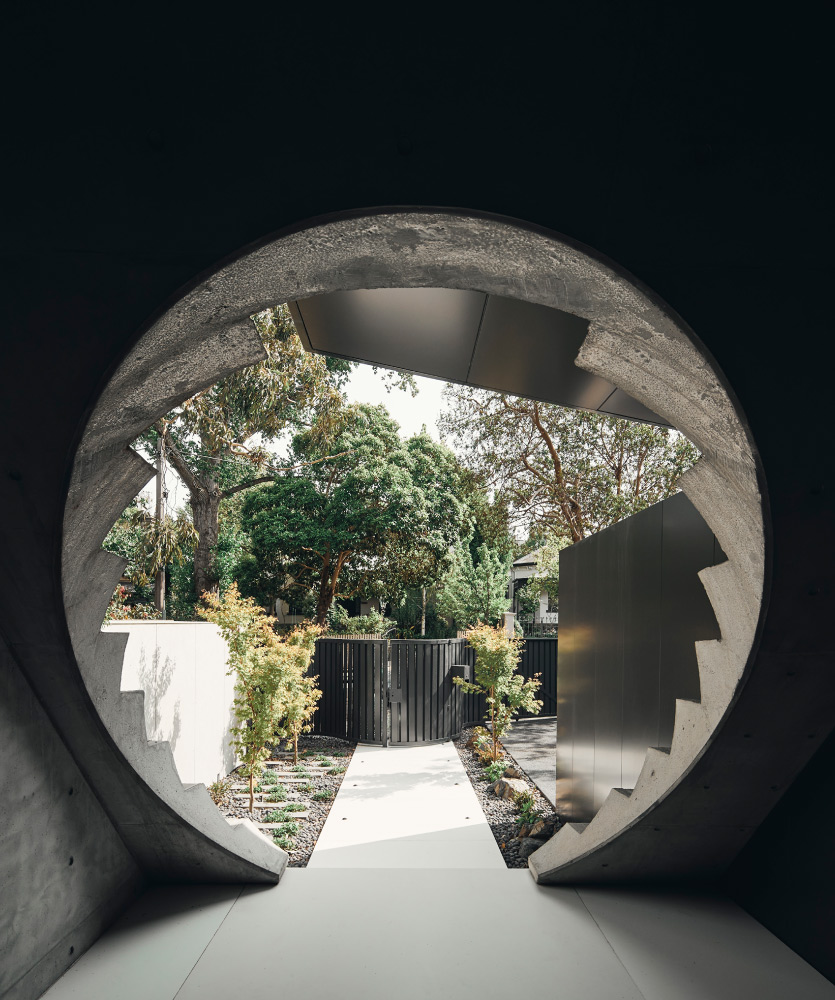 WHAT WAS THE INSPIRATION BEHIND THE PROJECT?

BILLY KAVELLARIS : We have taken baroque ideas and incorporated them in a contemporary language. The thing was central in the baroque movement was the fusion of all the arts and breaking all the rules of the renaissance and the classical era. There was also huge importance of ostentatious ornamentation, decoration and grandiose ideas and I think that suits the brief of what we were looking to do. The home is really looking at specific aspects of baroque architecture and incorporating them in the project. We wanted to continue these lessons but not replicate them. We are talking about learning from this movement and then taking the essence and qualities of it, and then interpreting them in the 21st century. For example, in the baroque movement staircases and sculptures were a big thing. Essentially the front façade is this great staircase with a hole punched through it and a 7-metre cantilever. It’s this really vibrant piece of architecture that is over the top and dramatic – it’s what we call static movement. There’s a 55-metre long art gallery from the front of the house right to the back the block. When you arrive at the house you are greeted with a sculpture which I called the ‘Decorated Duck’, which is a parody on Robert Venturi’s decorated shed and “The Duck”. The idea is that when you walk through the house wherever you are, you will experience art, it actually becomes a program which is the art gallery. As such, we wanted to feel that we were a part of the art gallery experience throughout the house.

TELL US A LITTLE BIT ABOUT THE GLAZED FAÇADE AND ITS PREMISE.

BILLY KAVELLARIS : The artwork itself is really a baroque interpretation of antiquity. There’s two artists called PichiAvo in Spain and they have produced a number of magnificent artworks over the years. They paint classical figures like Prometheus or Agamemnon, and they use graffiti and street art to do that, and that tension of old and new for me is exactly what our projects is about. The idea of connecting two eras but reading them simultaneously, so you understand the history and the contemporary language at the same time. In this case, we are reinterpreting the artwork which is reinterpreting the Greek history. The 13 murals that comprise the façade have been done all around the world – in USA, in Spain in the UK. We managed to get the rights to them, and we stitched them together as one big mural. The actual façade sits inside the building, so when you are in the art gallery and you look up you can see the outside of the building inside the space. You can actually experience the glazed façade from the inside as well as the outside, it becomes like a LED light, like a traditional church window. Every room has a beautiful an inverse reading of the outside world. It’s a very interesting architectural idea, in the sense that you usually don’t experience your exterior facade from the inside of the house.

HOW DO YOU THINK ARTS SHOULD BE INCORPORATED INTO INTERIOR DESIGN AND ARCHITECTURE?

BILLY KAVELLARIS : You are playing with scale with some large-scale artwork in the dining/living room. I always wanted to have an art gallery home. I didn’t know what sort of a form or what’s going to constitute it. A lot of the art in the house is are my own creations, and a lot of others are commissioned pieces from artists locally and internationally One of the key things and drivers about the house was the idea that art and architecture are not separate disciplines. In the 21st or even, I suppose in the 20th century, we were considered architects – people who design buildings. But if you go back a little bit more, you will see that architects were master craftsmen. They were basically artists and their medium was a building. The whole house is a big polemic about reconnecting the idea that art and architecture are the same thing, and art was used to be the tool to implement ideas of scale, ideas of connecting spaces. The giraffes were specifically designed for space, they sort of came hand in hand with the architecture. It’s not the other way around. We were not just filling the space with art; we are actually designing it at the same time. The idea was that you start to narrate and understand scale through art itself. In this case art actually becomes useful and has utility and has an important role to play other than just cultural. We used art as a critical device to create utility as well as being part of cultural expression. Putting it together, it’s all meant to provoke people to think. Some people might not like the house, it might be kitschy or confronting, but the idea is to provoke people into taking a position on what they think architecture should be.

HOW WAS THE PROJECT RECEIVED BY THE LOCALS?

BILLY KAVELLARIS : Originally, there was some resistance by a minority. There is a reason why the house is the way it is because of its location, its context (Toorak, Melbourne), its demographic and cultural aspiration. They [Neighbours] felt that they shouldn’t have something like that in ‘their’ neighbourhood. We wanted to play with that idea and demonstrate to people that there are alternatives, and this was really a way to provoke a response. And it did it. We get people daily wanting to come into the house or ask questions. 99% of people are engaged with it, but few of the older people of the establishment order really find it offensive. I love the idea that it challenges the traditional notion of what housing should be. And the juxtaposition with Victorian housing [makes] this house probably even better because the two heighten each other’s typology.

WHAT INSPIRED YOUR PROJECT’S COLOUR PALETTE AND MATERIALITY?

BILLY KAVELLARIS : The material palette is in many cases raw. Whatever material that has been installed in the property is raw. There’s concrete, steel, different textures of natural stone. When you arrive into the house you will see that there’s a nice curved wall that takes you around the spaces. That material is an unconscious, subliminal mechanism that we use to denote a public space. As you walk around the house you see that timber, you find yourself saying that it is the public space. When you go upstairs into the private areas, you have a different material palette – timber ceilings, timber floors, glass, walls, and the leather joinery.

WHAT INSPIRED YOUR BATHROOM DESIGN? YOU SELECTED APAISER ORIGAMI BATH FOR THE ENSUITE – WHAT DREW YOU TO ITS SHAPE?

BILLY KAVELLARIS : The bathroom again plays on that fusion and contrast between new and old, organic and manmade. It’s all very tactile. The idea was to have intense splashes of colour like the blue and the beautiful picture frame of the glass. The reason why we chose the bath, is that if you look at many of the materials, they have a fluted or textured finish. The apaiser Origami bath has that. It’s the idea of continuing that design language throughout the whole house in various materials – in steel, in timber, in the composite marble bath.

WHAT ROLE DOES THE BATHTUB PLAY IN YOUR DESIGN?

BILLY KAVELLARIS : Most of the spaces are designed with rigorous consideration. What I mean by that is that they are very elevational, and they are designed to be like a picture frame. When you look at the window it looks like a picture frame. There’s a real emphasis on the selection of materials, as pieces of artwork itself. The bathtub is designed so it looks like a design object – it’s an object that you can just look at, just like you would in a theatre or an art gallery. There’s a design rigour in that, and that’s the reason why we selected it. Because everything else in the house has the same rigour and language that we are trying to establish.