A feat of innovative design and out-of-the-box thinking, the Mediaworks building tells the story of radio—a medium rich in history and soul—through a brave, game-changing fitout. The Autex design team worked alongside architects Warren and Mahoney to create three bold, custom, acoustic sculpture walls for the common areas, and high-performance treatment for the studios.

The Mediaworks floorplan is laid out like a cityscape—each radio brand existing within its own unique neighbourhood. Characterised by three acoustic sculpture walls, the boroughs represent various physical manifestations of sound; anechoic (mustard), noise (crimson), and beats (khaki). Upon entrance, the lobby is cocooned by the three walls, stretching from the ground floor to the first floor like pillars. Not just a feature of the reception, the façades wrap around their respective boroughs housing studios, production suites, and meeting rooms.

Beat is defined as ‘a main accent or rhythmic unit in music or poetry’. To capture this concept in physical form, the designers begun with the image of a speaker cone—an object often at the mercy of strong, steady beats. From there they toyed with how this would look as a sculpture wall, abstracting the speaker cone to arrive at a hexagonal shape somewhat reminiscent of a paper fortune teller. Each hexagon is formed by six equilateral triangles with angled flaps, folded to give the entire sculpture wall an undulating, almost animated, appearance.

Throughout the design process, the Autex team met with Warren and Mahoney to present the concepts in model form—first with cardboard, then graduating to Cube™ panel—giving the architects space to refine the concepts, and a clear idea of what the final piece would look like. Due to the intricate nature of the beats wall, the models eventually became references for the installers—helping them construct the hexagonal mosaic.

The finished piece plays with light and shadow, emulating the wobbling pulse of a speaker cone in the throes of a gig. Made from custom, khaki coloured 12 mm Cube, the beats wall contrasts the crimson (noise) and mustard (anechoic) walls with a touch of biophilic design. While solid in appearance, it was constructed to leave a small air gap between the Cube cladding and the wall behind—maximising the range of frequencies absorbed and contributing to the STC of the pod walls. On sight, the wall offers respite from the high energy world of radio, mesmerising in sheer size and gentle swell. 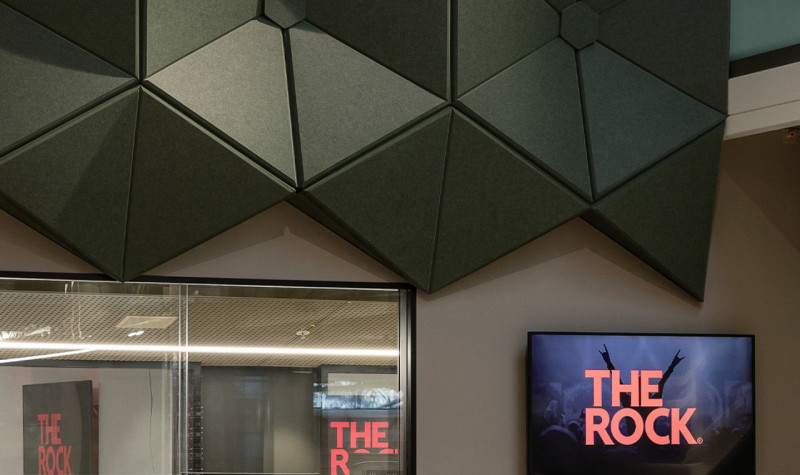 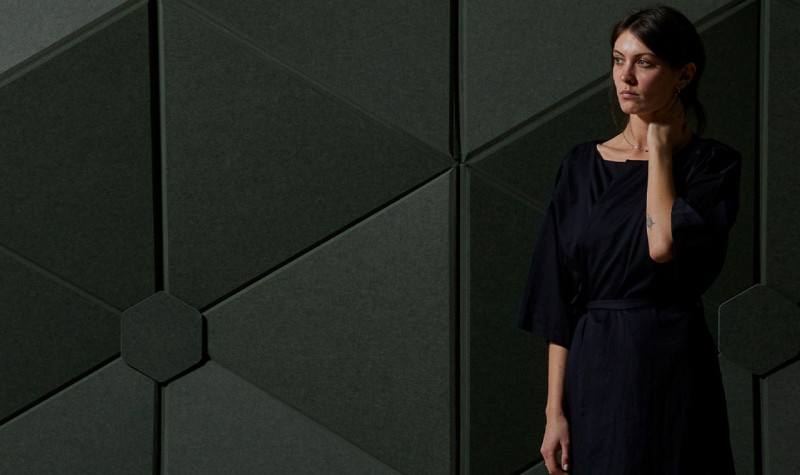