17 Mar 2021 by Galvanizers Association of Australia

Monster Croc Galvanized for a Long Life in the NT

The crocodile proudly overlooks the surrounding tropical vista from its vantage point outside the African-Madagascan garden. In addition to paying homage to Darwin’s native estuarine crocodile, the sculpture also honours the barramundi, with one very unlucky fish trapped in the monster croc’s mouth.

The crocodile is the fifth reptile sculpture to be donated by the Friends of the Darwin Botanic Gardens, using funds raised through their annual plant sale. Friends of the Darwin Botanic Gardens Secretary, Peter Knibbs, confirmed that the artwork was one of the largest pieces acquired by the group. “This one will be impossible to beat, it’s a significant piece of public art,” he said.

Local artist Techy Machero was commissioned for the project in 2015 by the Friends of the Darwin Botanic Gardens.

Machero spent a considerable amount of time researching crocodiles to make sure the sculpture was as lifelike as possible. She even enlisted the help and advice of veteran Northern Territory Ranger and croc-wrangler, Tommy Nichols. She also sought the advice of Darwin Galvanizing—the firm that double-dipped the monster croc for corrosion protection. According to Paul Stone (General Manager, Darwin Galvanizing), “The crocodile is constructed from thousands and thousands of individual pieces of steel. The unique local artist, Techy, relied upon traditional artisan techniques to create the sculpture, as opposed to steel fabrication processes. She literally used an anvil and hammer to tap each individual piece into shape, over a period of about four or five years.” 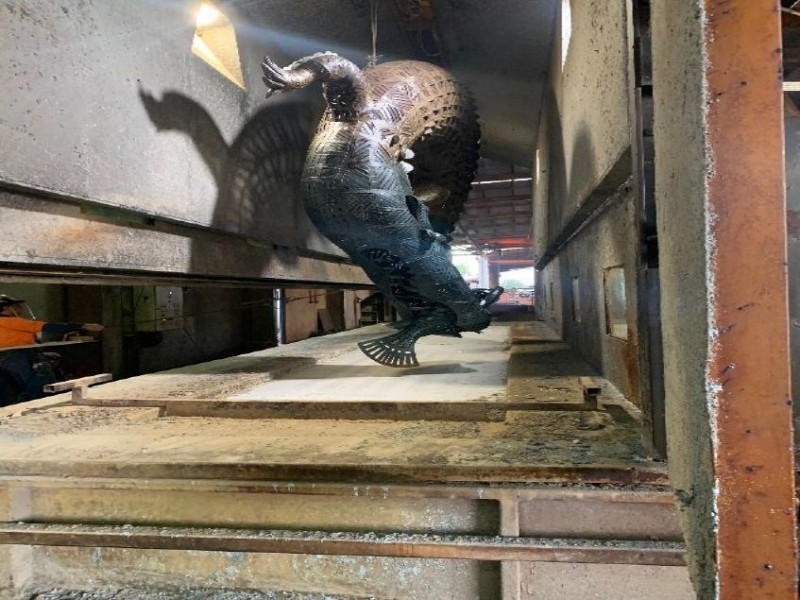 As the leading local experts, Darwin Galvanizing was contracted by Techy Machero to undertake the galvanizing process.

No other protective coating for steel provides the long life, durability and predictable performance of hot dip galvanizing. An alloy of its steel base, a galvanized coating is unique in matching the design and handling characteristics of steel. 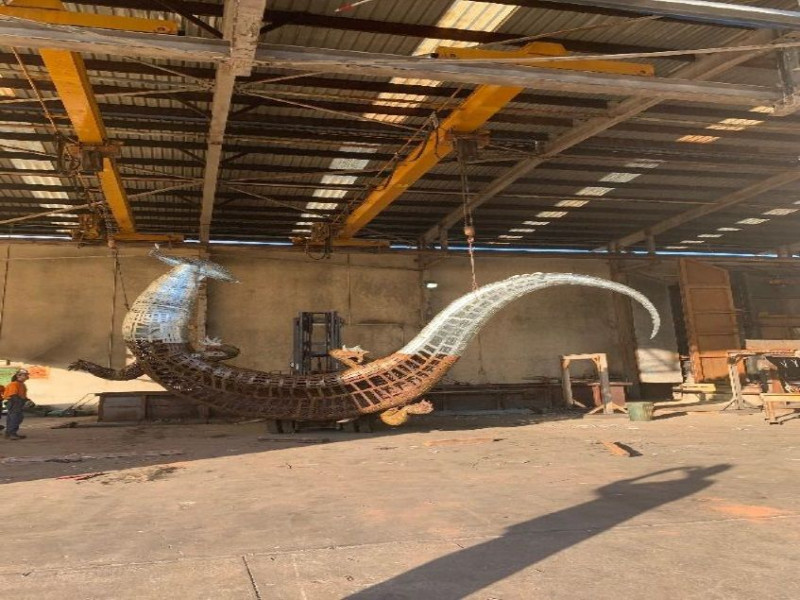 In addition, in the presence of atmospheric moisture—such as the humid environment of the Darwin Botanic Gardens—the zinc oxide film is quickly converted to zinc hydroxide, and carbon dioxide present in the air reacts to form basic zinc carbonates. These stable inert compounds resist further action and ensure long life for the protective galvanized coating.

“In my opinion, galvanizing is the best corrosion protection known to man, so long as it’s suitable for both the product and the environment. Something like this crocodile sculpture could have been painted, but paint simply wouldn’t have been as cost effective, durable, or efficient,” said Stone.

Darwin Galvanizing was presented with one major obstacle when it came to the crocodile: its enormous size.

“The crocodile snakes around and has a huge barramundi in its mouth. It is massive. It’s 9m long, 4.7m wide and, from the ground to the top of its head, it’s about 1.65m tall,” explained Stone. “Our tank is 10.5m long and 1.5m wide. So the length and width of the crocodile were not an issue. The issue was the 1.65m height of the crocodile.”

“As a result, the technicalities were fairly unique because of the sheer size of the sculpture, and the manual handling required. At one point, I actually phoned Techy and told her that I was about 90% sure that it just wasn’t going to work,” said Stone.

“But, we assessed the risk and decided it was safe to go ahead. We had to roll the sculpture around as we were immersing it. It surprised me. I thought we might had have to submerge the sculpture three or four times to cover the entire surface, but we able to get it done in just two dips.”

Given the technical challenges presented by the project, Darwin Galvanizing opted to undertake the work in non-operational hours. One Friday night, Darwin Galvanizing completed all the cleaning processes, from degreasing and pickling through to fluxing. Then, on the following Saturday, the actual galvanizing was performed.

“Once we had the crocodile suspended, we couldn’t put it down on the ground. After the sculpture went through pickling process, it had to remain hanging up in air. So we decided to complete the job outside regular operating hours, rather than monopolise the use of our cranes and hold up production throughout the entire facility,” said Stone.

“This crocodile was something I could never have contemplated galvanizing in my 25 years of experience, but the end result was great—the sculpture turned out really well.” Darwin Galvanizing is part of the Kingfield Galvanizing group, which was established in Melbourne in 1983. Over the years, Kingfield Galvanizing partnered with other businesses to expand their operations, opening new plants in Brisbane, Geelong, Christchurch, and Sydney. Darwin Galvanizing was established in 1997 and, in 2012, was restructured and a new, state-of-the-art facility was built to support the local market needs.

• Commissioned by: Friends of the Darwin Botanic Gardens 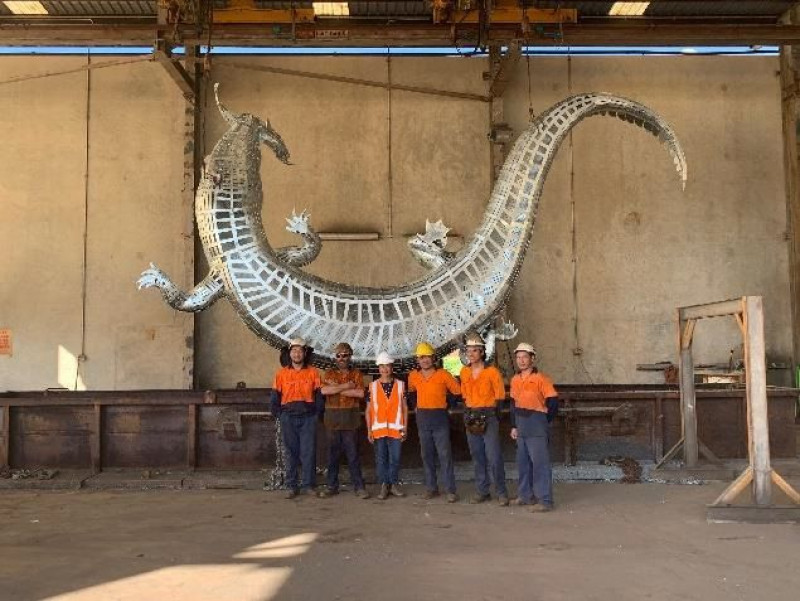 You can see a video of the crocodile on Facebook, here: https://www.facebook.com/GeorgeBrownDarwinBotanicGardens/videos/2820360558033765/?t=0