17 Mar 2021 by Galvanizers Association of Australia

The Benefits of Galvanizing Cruise into the Port of Brisbane 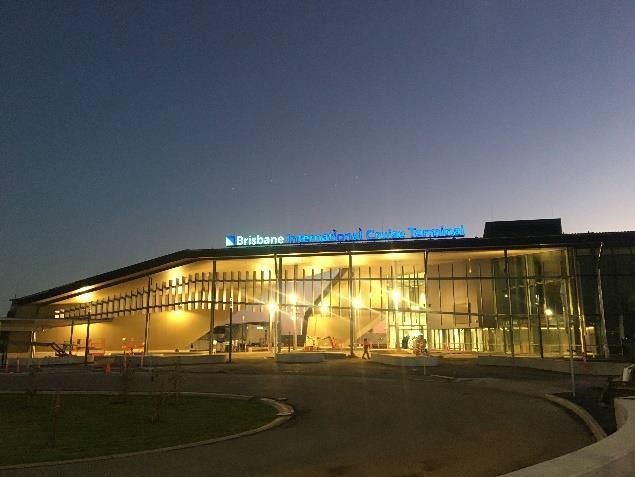 The new $177 million Brisbane International Cruise Terminal has been designed to treat passengers to a world-class experience. Located at the mouth of the Brisbane River with access to deep water, the Cruise Terminal is equipped to handle a range of ships, including the largest cruise ships in the world. Over 180 cruise ships had been scheduled to arrive during the 2020-2021 season prior to the outbreak of the COVID-19 pandemic. While COVID-19 is likely to have a sustained impact on tourism globally, the Cruise Terminal is expected to become a major gateway to south-east Queensland long-term, and a vital pillar of the tourism industry in Brisbane and throughout the sunshine state.

The Cruise Terminal will also deliver a major, long-term economic boost to the region. Within 20 years, it is likely to triple Brisbane’s cruise industry to: support 3,750 jobs, bring over 760,000 visitors to the region annually, and contribute $1.3 billion in net expenditure to Brisbane’s economy. The terminal building itself occupies approximately 9,300m2, set over two levels, and is connected to a 200m long wharf. The elegantly designed structure features a covered elevated walkway from the passenger drop off area into a large-span covered plaza, which then continues into the main entry, embarkment hall, and café. Passengers access level one via travelators to immigration, and then make their way onto the elevated walkway, and through to the cruise ships.

The Cruise Terminal also encompasses a 900-space car park, fitted with solar panels that will generate approximately 1,300MW of power each year—the equivalent of powering approximately 160 homes. It is the Port of Brisbane’s largest solar installation to date.

Transitioning from Concrete to Steel

Initially, the design of the elevated walkway called for the use of two large steel box beams on concrete piers with multiple pre-cast concrete slabs fitted on top to form the walkway base. Steel roof portals were then to be fixed on top of the pre-cast concrete. The walkway consisted of twelve individual spans measuring 5.8m wide x 4m high and up to 32m long per span. This design would have meant working at height over water for the duration build.

Hindmarsh (the head contractor on the project) was keen to re-design the walkway to eliminate working at height over water during the installation of the elevated walkway trusses, and to reduce the overall build time. 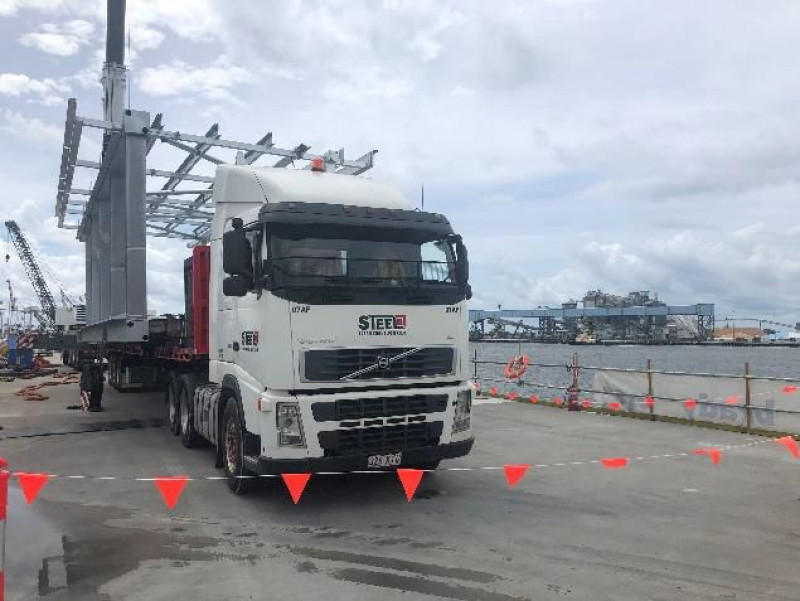 According to Phil Cox (General Manager East, DSI Underground), “Collaboration between the architects Arkhefield, steel fabricators Steel Fabrications Australia, and the galvanizers DSI Underground saw the design undergo significant revisions. The concrete piers and slabs were replaced with hot dip galvanized steel.” As a result, over 700 tonnes of galvanized structural steel and purlins were used in the construction of the Cruise Terminal building, the elevated walkway, and the car park. All this steel was supplied by local steel mills, or ACRS approved mills (if the material was unavailable locally).

“The new lightweight galvanized steel truss modular walkway design was developed to enable 12 spans to be fully built on the ground—complete with louvres, roofing system and glass. Once each of the module spans was complete, they were lifted into their final position with a variety of mobile cranes. This reduced the working at height issue by more than 90% compared to the original pre-cast concrete floor design,” said Cox. 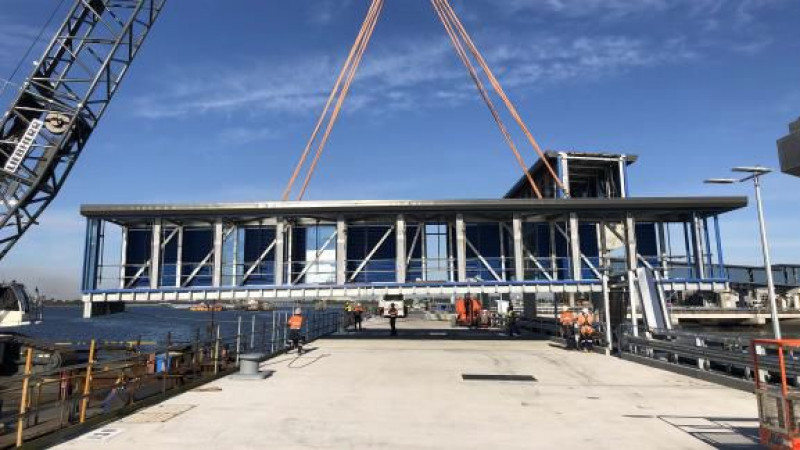 “Another benefit of utilising the galvanized steel modular system approach was that the spans could be constructed at the same time as the wharf and piers. This saved a considerable amount of time, which was particularly important given the tight project schedule.”

With hot dip galvanizing chosen as the superior surface treatment, the challenges posed by the new design were identified early. Arkhefield, Steel Fabrications Australia and DSI Underground worked closely to ensure the best possible outcome for the project.

“Our galvanizing bath is 13m long x 1.8m wide x 3m deep. To alleviate any issues related to the width of our bath, the sides of the truss— which had stubs welded perpendicular to the top and bottom chords to facilitate the bolting in of the horizontal floor, roof and bracing steel members—were fabricated in a particular way,” said Cox.

“With respect to the length constraint, all the trusses were split into lengths no longer than 12m. For instance, a 24m truss consisted of two 12m sections that were then bolted together on-site. This innovative design change allowed the trusses to be efficiently galvanized and transported to site without incurring significant additional transport costs.”

“The new design also had to take into the consideration suitable venting and draining without compromising the aesthetics. All RHS trusses were internally vented, with a small inspection hole located in a position as to not detract from the visual appearance of the finished structure,” said Cox.

“With Lysaght Bondek® selected as the material of choice for the elevated walkway, extensive corrosivity testing was carried out. As a result of this sample testing, we decided to strip the pre-galvanized Bondek® and hot dip galvanize it in order to achieve thicker coatings. This increased the coating thickness by approximately three times, considerably increasing the life span of the structure, and reducing ongoing maintenance costs. 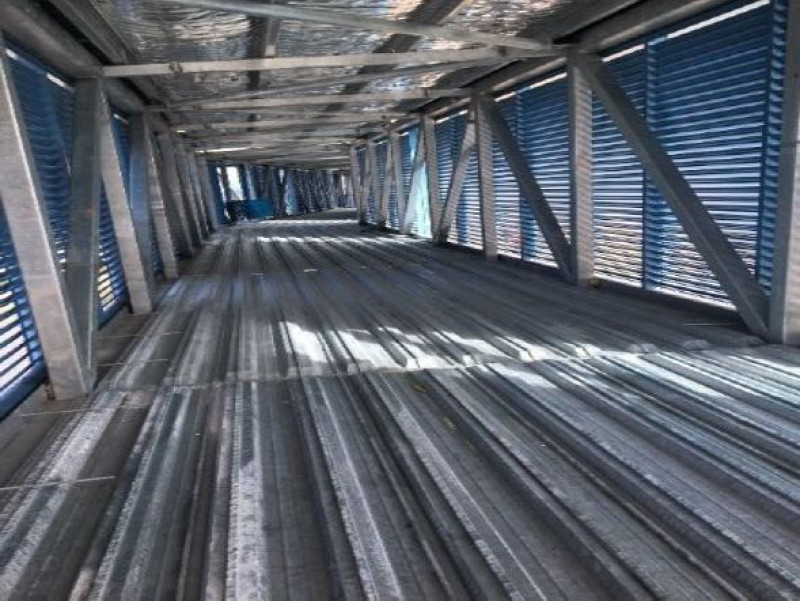 “The high-profile nature of the project provides a real opportunity to highlight the benefits that hot dip galvanizing delivers, particularly when compared to pre-cast concrete installations. With design considerations integrated early in the planning process, even oversized galvanized steel assemblies can be practical, safe, and economically beneficial in the long-term,” said Cox. 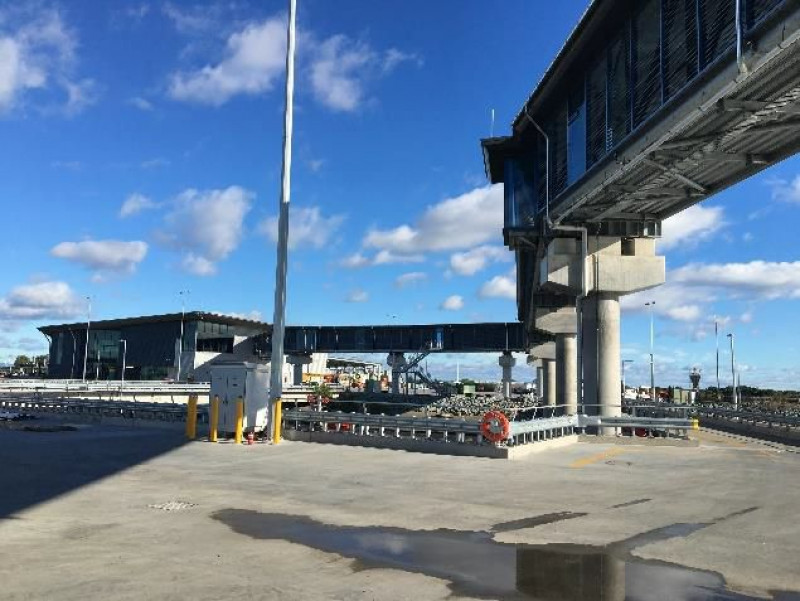 This project was awarded the 2020 Sorel Award for Industry Achievement by the Galvanizers Association of Australia. The Sorel Award recognises Stanislas Sorel who patented an industrial form of the hot dip galvanizing process in 1837, itself first developed in the European region by Paul Jacques Malouin in 1742. The Sorel Award is designed to highlight the high standards of design, fabrication, construction, and corrosion protection achieved when hot dip galvanizing features as a key component of a project.

This project was also the 2020 Australian Steel Institute (ASI) Winner for Queensland in the Engineering Projects division for Steel Fabrications Australia. Details of the award and other winners can be found here. 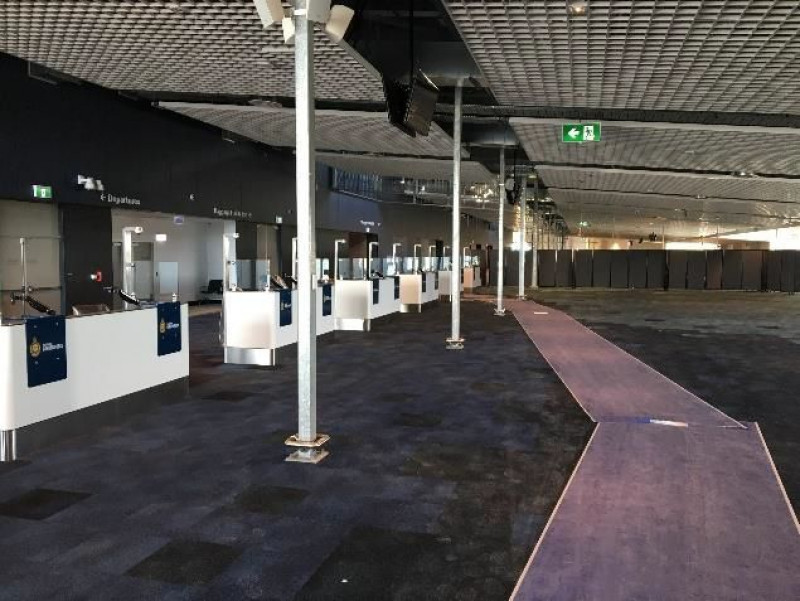 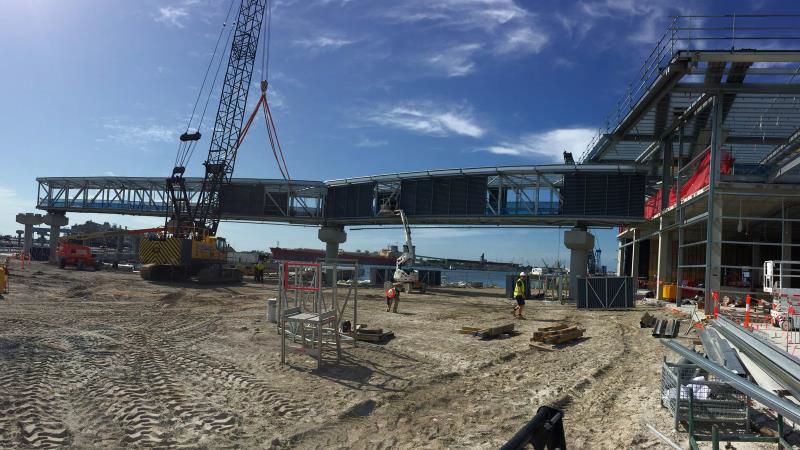 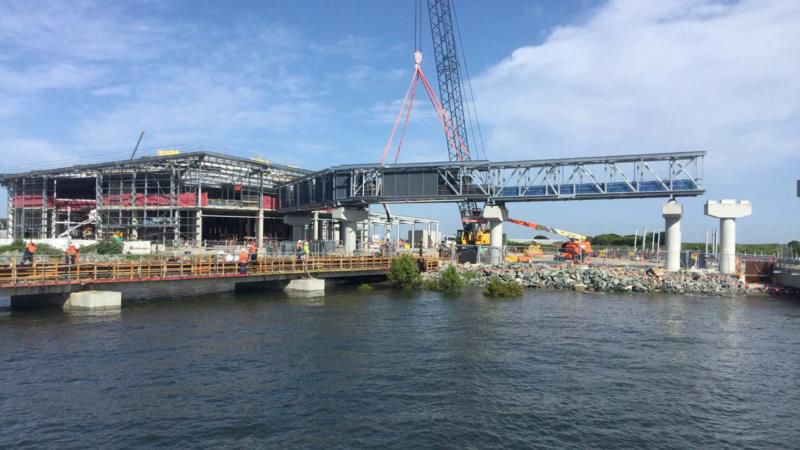