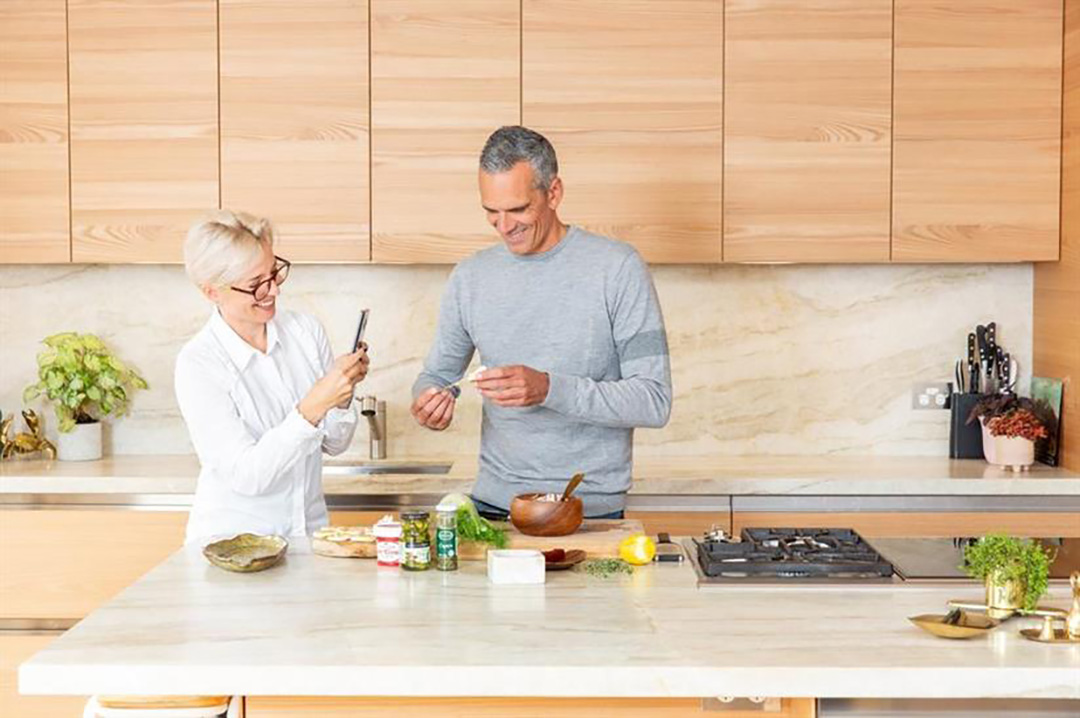 Celebrity chef Josh Emett makes weeknight cooking easy in an inspirational Matisse kitchen that’s the perfect stage for his gorgeous dishes @joshemett, you’ll have already glimpsed his stunning home kitchen in the photos and video stories posted every week. Behind nearly every steaming pie, paella, slow-cooked one-pot tagine, smoothie or soup, there’s a backdrop ofsand-coloured Taj Mahal stone benchtop and splashbacks, or warm elm cabinetry visible as Josh holds up a dish or giveaway for the camera. The kitchen, which was created for Josh and his wife Helen Emett nearly 18 months ago, is one of the hardest-working home kitchens in the country. The Matisse design team worked with Josh and Helen to develop a space that would not only work for their busy family but also be a perfect “chef’s kitchen” using all the latest innovations from the internationally acclaimed Arclinea brand and their vast array of components and accessories. On top of that, it performs a third function as a “performance kitchen” when Josh needs to shoot videos or host cocktail evenings or dinner parties.

While much of the reason for the extraordinary growth in Josh’s Instagram following (it’s gone from 3500 to more than 30K in less than six months) is due to the delicious-yet-manageable recipes that he and Helen post, having such a beautiful venue to showcase them in certainly doesn’t hurt.Helen Emett, a self-taught social media expert, shoots all the images and stories of Josh working hard in the kitchen, and says she and Josh always have a goal of helping families like them solve the weeknight dilemma of what to cook.“I think we face the same challenges that anybody does — what do we cook for the family for dinner tonight? How do we stay healthy? One thing that a lot of chefs do on social media is put down beautiful plates that they’d serve customers, which looks lovely and people enjoy looking at them, but it doesn’t help them,” says Helen. “So we decided to do what we could to help. And we do know that people love to see the behind-the-scenes side of things.” 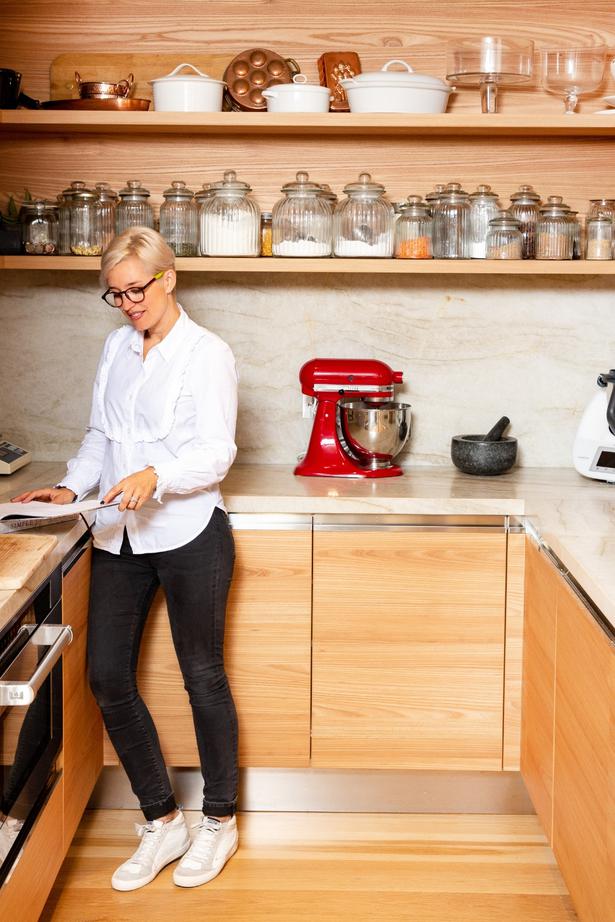 Helen says her favourite part of their kitchen is the custom designed scullery. Photo / Babiche Martens
One of the big successes of the space has been the striking, gently veined stone benchtop. “I think it’s really made this kitchen,” says Josh. “People walk in here and go, ‘Oh my god, I love it.’ It’s such a great colour, it’s a great texture, and it feels wonderful.” More importantly, it has stood up incredibly well to the continual use. “You can’t find a mark on it. We’ve had so much action in here, and it’s been amazing. It’s beautifully hard-wearing. You can’t kill it, essentially.”
As well as the daily social media content, Josh cooked every recipe for his new “food bible”, The Recipe (released in May) in the kitchen, and photographer Kieran Scott shot every image right there as well. In fact, the kitchen was such a central part of making the book that a close-up of the veined stone benchtop features on the inside front and back covers.That makes it a perfect ‘thank you’ gift for Jeanne and Alan Bertenshaw, founders of Matisse International Furniture, to include whenever they have a new kitchen delivered to a client.Perhaps not surprisingly, Helen says her favourite part of the kitchen is the scullery, which makes keeping everything looking good a breeze. 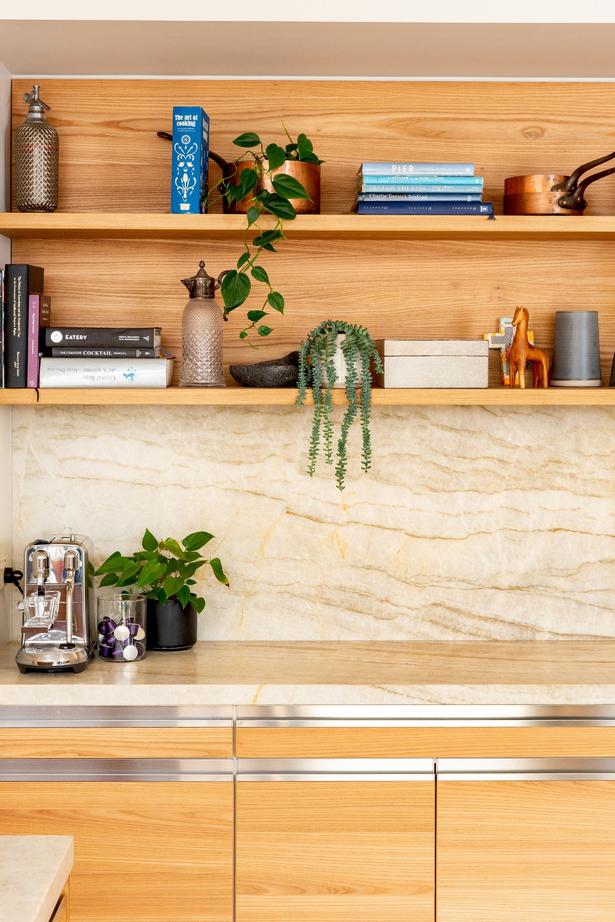 You'd be hard pressed to find a single mark in Josh and Helen's hardworking kitchen, which is testament to the durability and quality of a Matisse kitchen. Photo / Babiche Martens
“Everything can sit in there, rinsed off, until we’re ready to put it in the dishwasher, but the kitchen itself always looks tidy, which is great when you’re shooting or when we’re having a dinner party.”The intuitive flow of the kitchen also works brilliantly, down to subtle details like the placement of the audio equipment drawer next to the drinks station, so someone can change the music without getting in the chef’s way. “From that point of view, it was great working with Matisse, because they brought another layer of expertise — the chef, the home cook and then the designers who could say to our ideas, ‘That cupboard door will knock into the dishwasher so that’s a no-go’.”“I don’t think there’s anything I’d change about this kitchen,” agrees Josh. “It’s absolutely brilliant. It’s so functional and so well laid out. God forbid we ever decide to move house, because we’d have to rebuild it exactly the same.”
Josh’s Easy Cocktail Party CanapésWith spring here, Josh whipped up a couple of simple cocktail-party canapés for Viva that (with a little pre-prep) can be pulled together in less than 20 minutes on the day. 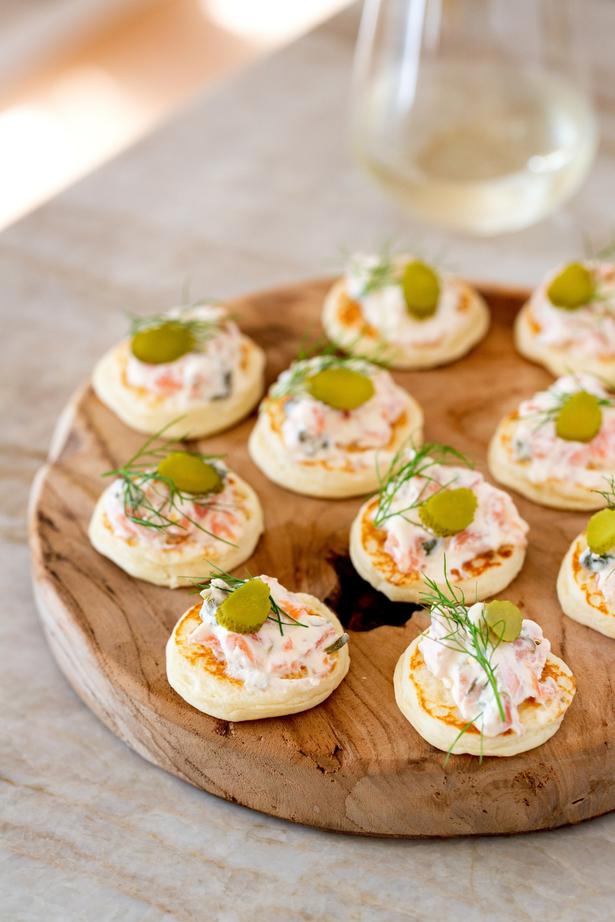 Smoked Salmon Blinis with Sour Cream. Photo / Babiche MartensGoat Cheese Gougeres with Quince Paste and ThymePrepare a tray of miniature cheese gougeres (you’ll find the recipe on page 306 in his book The Recipe). These can be made well in advance, frozen in a bag or container in the freezer and re-heated on the day, or substituted for store-bought cheese gougeres.Mix 100g of soft goat cheese with 25g mascarpone and spoon into a piping bag. Pipe into the centre of each gougere. Top each canapé with a sliver of good-quality store-bought quince paste and a couple of picked thyme leaves. 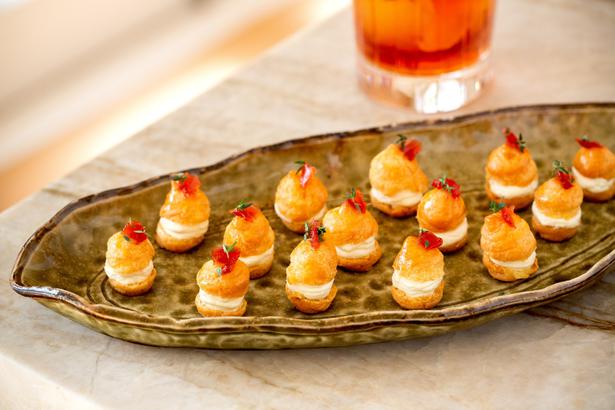 Goat Cheese Gougeres with Quince Paste and Thyme. Photo / Babiche MartensSmoked Salmon Blinis with Sour CreamTake a packet of good quality store-bought blinis (like Marcel’s Fancy Blinis) and lay out on your serving platter. Chop a small handful of rinsed capers and 100 grams of smoked salmon and stir into one third of a cup of sour cream of your choice. Spoon a dollop of the sour cream mixture onto each blini and top with a sprig of fennel top or a thin slice of cornichon. Done!

Matisse
New Zealand
Matisse International is recognised as the leading supplier of world-class residential, kitchen, bathroom and residential furnishings at the superior quality end of the New Zealand interior fit out market. Our product offerings have been created for those individuals and firms who insist that their home and office furnishings demonstrate a high level of sophistication, luxury, exquisite style, and prestige.Our mission: To be New Zealand’s leading supplier of future proofed sustainable world-class designs that create ‘inspirational’ places to work and liveWith over 30 years of experience in dealing with the International furniture and interior fit out supply sector, Alan and Jeanne Bertenshaw the co-owners of Matisse have forged a reputation unique in New Zealand with the world’s leading manufacturers and designers of quality contemporary furniture for the home and office as well as kitchens, wardrobes and bathrooms.In order to maintain our world-class reputation, Matisse is committed to only working with manufacturers that produce an all-encompassing level of quality and superior design, providing the highest levels of comfort and unmatched durability over time.
More Updates