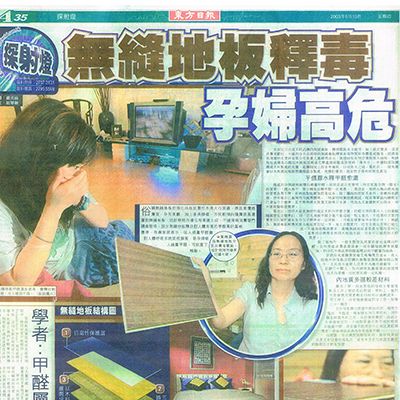 Laminate flooring, commonly known as seamless flooring, has recently become popular in Hong Kong due to its low price and beautiful appearance. In addition to the SARS epidemic, the public is more inclined to choose seamless flooring that is easy to clean. It is estimated that the current market share is up to 70%, but the Shenzhen consumer department The investigation found that some seamless floors release formaldehyde harmful to humans higher than the local standard. Some experts have said that inhaling excessive formaldehyde will cause damage to the human respiratory system. If pregnant women inhale excessive formaldehyde, they may give birth to teratogens. Different brands of seamless flooring have recently appeared on the market. They are advertised as being waterproof and durable, and with a wide variety of styles, they are very popular with consumers. However, some substandard seamless flooring releases toxic substances that cause harm to the body. Ye Qimei, the head of North America Co., Ltd., which operates floor wholesale, said that seamless flooring is different from traditional log flooring. The surface layer of seamless flooring is made of hard "thin wood chips" after chemical treatment similar to wood grain paper. The middle layer is The sandwich layer is made of fiber or wood, and the bottom layer is put on waterproof balance paper to achieve waterproof effect. Ye frankly said that generally the interlayer will be made of wood or other plant fibers. The quality of the interlayer depends on the density of the raw materials. The higher the concentration of formaldehyde released by the cheap glue, the more formaldehyde is released from some seamless floors. The reason is that the quality of the adhesive (glue) used when the interlayer is mixed is "the more the glue is, the stronger the formaldehyde will be released on the first day."