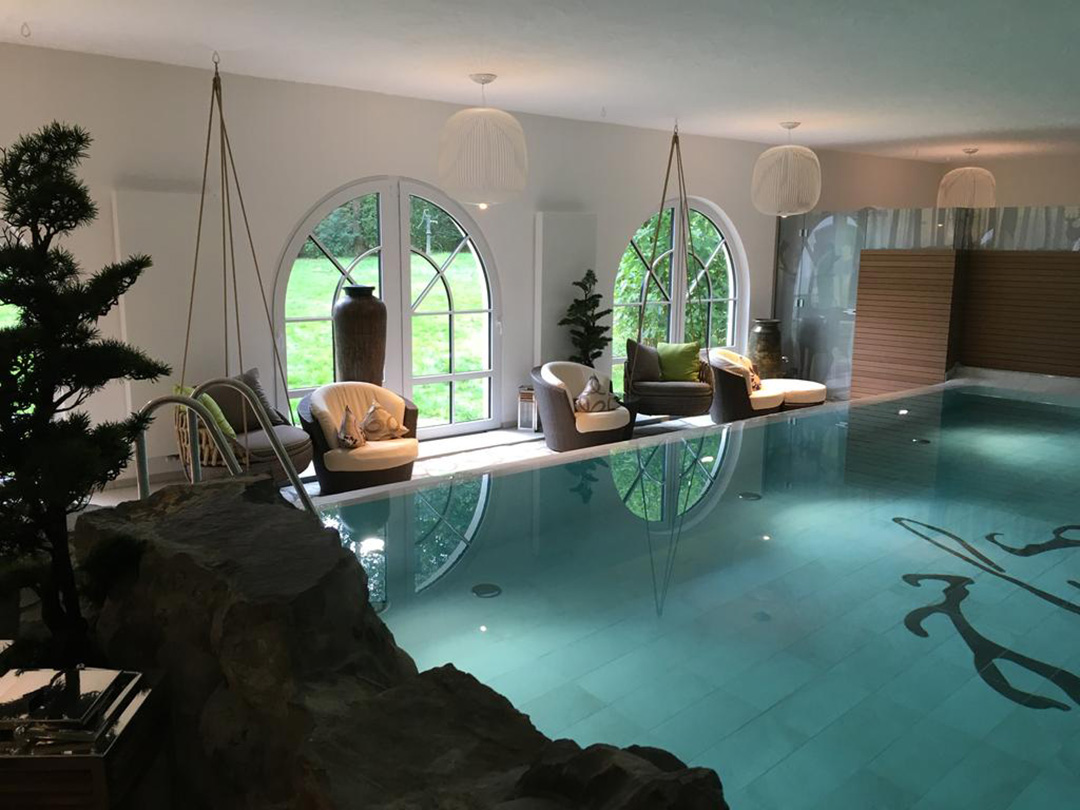 The "Jagdhof Glashütte", one of the most beautiful country hotels in Germany, is situated in the middle of the most densely wooded area of Germany, the idyllic Rothaar Mountains. As the icing on the cake, a new Deep-Forest-Spa area was to complement the five-star, nature-inspired feel-good concept. The interior design office Bachhuber Geissinger, in cooperation with the architectural ceramics specialist Agrob Buchtal, accepted the challenge of the conversion. They renovated the outdated swimming pool and sauna area and used selected materials to create a relaxation area which interprets the "Jagdhof" theme in a modern way and at the same time integrates the tried and tested.

Far away from the hectic pace of everyday life, embedded in the idyllic Wittgensteiner Bergland, not far from the small town of Bad Laasphe, you will find a jewel of peace and relaxation: the traditional Hotel Jagdhof Glashütte. In the forest and hunting grounds of the Prince Sayn-Wittgenstein, the guests are offered romance, exquisite meals and pure nature. The privately run luxury hotel belongs to the renowned Relais-Châteaux-Hotels association, which distinguishes itself by a high level of service, an exceptional cuisine and a special concept of hospitality. As a talent factory, the hotel's own restaurant has already prepared the way for nine star chefs.

Formerly a carter's pub, then an inn and country hotel, the Jagdhof Glashütte celebrates its 35th anniversary in 2019. The traditional and at the same time refreshingly unpretentious hotel presents itself as a paradise in nature offering its guests every imaginable luxury without wanting to be luxurious. The themes of game, nature and forest run through the entire house: from the furnishing of the public rooms and guest rooms to the culinary delights and the slogan "The Jagdhof - the place where nature lives" and on to the recently redesigned Deep-Forest wellness area.

As already with the preceding renovations, the owner couple Dornhöfer assigned this task to Gaby Bachhuber-Geissinger - a well-known interior designer with planning office of the same name in Bad Birnbach and pronounced experience in the hotel sector. In order to be able to create a generous, bright atmosphere and to extend the reclining areas, she decided to "clean up" the previous swimming pool and sauna area as regards planning first of all. Thus the existing grottos and sauna were demolished and the space around the swimming pool enlarged. The new saunas and treatment rooms were relocated to adjoining areas and now form a thematic unit with the new fitness area.

Preserving the tried and tested and continuing in a modern interpretation

The generous interior design already reveals itself to the guest at the entrance where a glass door gives a first glimpse into the spa area. The large rock face is a particular eye-catcher. It was part of the previous complex and should be preserved at the owner's express request. The interior designer adopted the natural, archaic look of this rock face and transferred it in an abstract form to the entire complex, but especially also to the swimming pool itself, using high-quality ceramic tiles of the Quarzit series. The sales representative of the manufacturer Agrob Buchtal, who advised not only with regard to the design possibilities, but also the functional aspects such as, for example, the different slip resistencves, provided valuable support here. The result is impressive, because it is unusual for a hotel swimming pool that a tile format deviating from the standard (here: 25x50 centimetres) is used and at the same time functional requirements such as the slip-resistance classification R11/B are realized so aesthetically.

It also was the sales representative who brought a very special service of Agrob Buchtal into play: the in-house planning department. With the help of this team of specialists, the wish of the owner couple could be fulfilled and the logo of the hotel could be incorporated into the floor of the swimming pool. For this, the experts of Agrob Buchtal worked out the technical basics for the following exact cutting of the individual tile elements by water jet technology with millimetre precision. Despite the complexity, the laying of the resulting filigree logo was child's play, as Agrob Buchtal supplied a self-explanatory plan at the same time.

With the Quarzit series, Agrob Buchtal has succeeded in combining an expressive look with the advantages of ceramics. Discreetly integrated gloss and mica particles underline this natural elegance and lend the tile visual depth and an unmistakable character. Thanks to the wide range of colours, formats and slip resistances, Quarzit is suitable for both public and residential areas - an advantage which was creatively brought to bear at the Jagdhof Glashütte. For example, the fireplace visible from both sides, which also serves as a room divider to the reclining area, was also designed with tiles from the Quarzit series. They can also be found on the floor and the entire staircase, thus acting as an architectural link. Another special eye-catcher is the shelving system also designed with these tiles, which not only integrates itself conclusively, but is also extremely easy to clean and robust.

The spa bathrooms, in which different massages are offered or one can also simply take a bath in a wooden tub, enhance relaxation and letting go. This effect is supported by well-dosed light scenarios, quiet music and typical Jagdhof accessories. On the floor, the tiles of the Quarzit series in the representative format of 60x60 centimetres are convincing.

The new Deep-Forest-Spa area was very well received by the many regular guests right from the start. The motto "Back to nature - but with style" also proved its worth at this renovation, as the feedback from one guest confirms: "The Jagdhof has remained true to its consistent idea. No wellness hocus-pocus, just relaxing in and with nature".