Innovative DryTile system also in demand in the USA 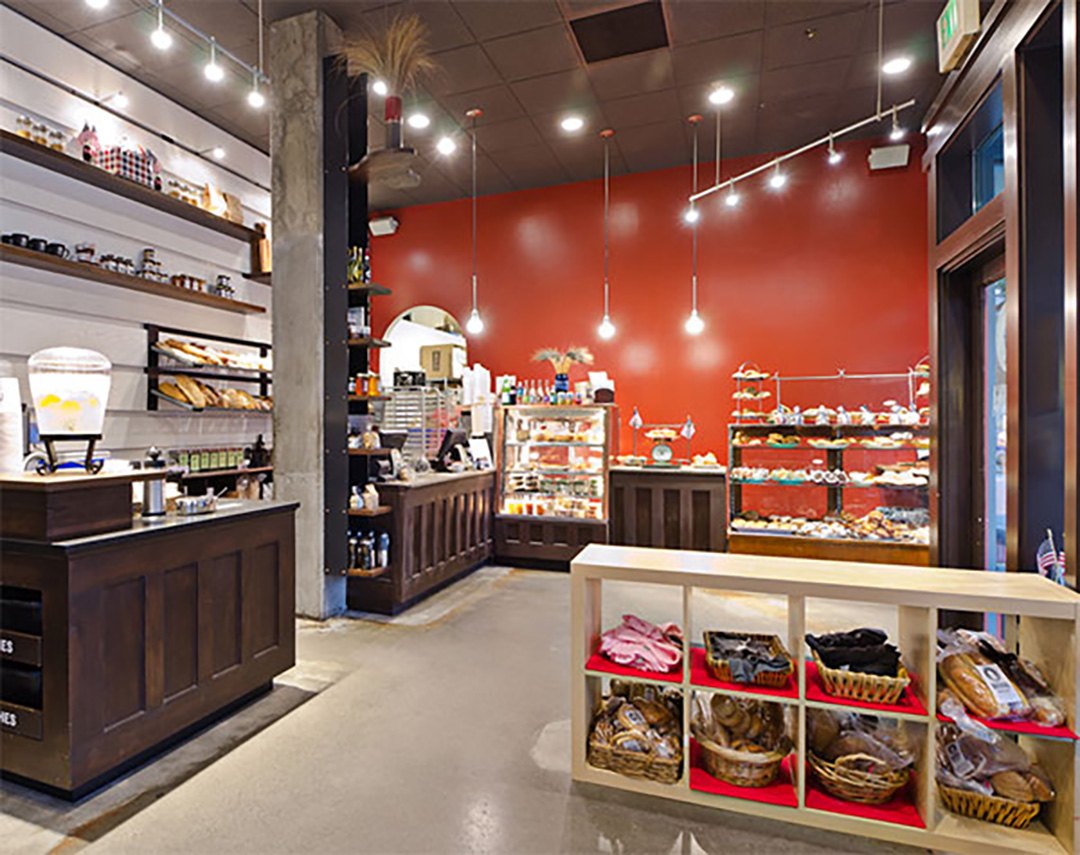 Seattle is located in the American state of Washington and is the biggest city in the northwest of the USA. The metropolis has a very high quality of life and is characterized by water, mountains and hills. It has several nicknames such as e.g. Emerald City in allusion to the plenty of green or Jet City as an indication of the nearby Boeing aircraft works.

In the second half of 2018, within a few days a branch of the renowned Macrina bakery chain in the Capitol Hill district was renovated “from the bottom up” in the true sense of the word. The crowning final step of the extensive modernization was a new floor covering in the form of ceramic tiles from Agrob Buchtal's DryTile system. The project was accompanied by DryTile North America LLC, which was founded at the end of 2017.

Challenges are there to be mastered...

In accordance with the high-quality range of products offered by the Macrina bakeries, an equally exclusive ambience should be created. To achieve this goal, however, the building first had to be renovated. The first step was a well-founded appraisal, as is customary with existing buildings. The floor was of particular importance here because of its room-characterizing effect. The analysis of the lowest level revealed many challenges: broken joints, deep cracks, striking furrows, significant differences in height, partial spalling, openings coarsely filled with mortar and adhesive residues.

Due to this initial situation, simple grinding of the existing floor did not make sense or was not possible, but substantial works had to be carried out, such as, for example, basic cleaning to delete dirt, removing loose and brittle parts or filling cracks and spalling. In addition, the larger holes and trenches were filled in order to level out height differences to some extent, to obtain a rough surface flatness and to improve the structural-physical homogeneity.

After these elementary preliminary works, an essential step followed, which in principle is relatively simple but nevertheless requires the right choice of material, strict adherence to the processing instructions and appropriate know-how. By the professional application and fine distribution of a fast-hardening and self-levelling smoothing and levelling compound, an extremely even and homogeneous floor slab with a layer thickness of up to 7.5 centimetres was created. Of course, acknowledged technical rules were observed, such as e.g. circumferential edge insulation strips as a mechanical buffer and acoustic separation from the walls to avoid impact noise.

After checking the required flatness of the hardened floor slab and exactly adjusting the “master line” with the aid of laser equipment, the approximately 140 square metres of DryTile floor tiles were laid, cut and pointed. The advantages of this innovative system came to full effect: These high-quality ceramic tiles of the brand Agrob Buchtal are provided with a thin cork layer on back already ex works, which is durably applied. This cork layer on back slightly projects on all sides, so that a precise narrow joint is formed when the tiles are joined to each other, which then is filled with a special pointing compound explicitly developed for the system. Prior to pointing, the covering can be walked on immediately, for example for subsequent works by other trades. After pointing, the surface can be walked on after 12 hours and is fully load-bearing after further 12 hours. As the name DryTile already suggests, the tiles are laid "dry" without tile adhesive. The system permits an up to 8 times faster laying.

For this project, the architect Richard Floisant from the local studio of the same name and the client Macrina had chosen the 30 x 60 cm format, which was laid in the dynamic semi-bond pattern. In accordance with the desired overall ambience, the colour of the ceramic tiles was chosen from Agrob Buchtal’s Mandalay series in the form of a light shade with noble rustic look and natural wood-like grains.

Especially in food and catering areas an appealing and appetizing ambience is an important success factor, which could be realized within only a few days in the case of this project in Seattle. Thus, not only the loss of income was minimal, but the result is convincing both functionally and aesthetically. This is confirmed by the response of the customers after the conversion, who have been astounded and positively surprised by the speed and quality of the comprehensive redesign. Customer loyalty is correspondingly intensive: the combination of an excellent range of products and a pleasant atmosphere means that you not only take a few treats with you in a hurry, but also stay longer in the integrated café for a little personal time out - an attitude which perfectly fits with the sovereign local way of life, as Seattle enjoys the reputation of a varied, open-minded and very cool city.