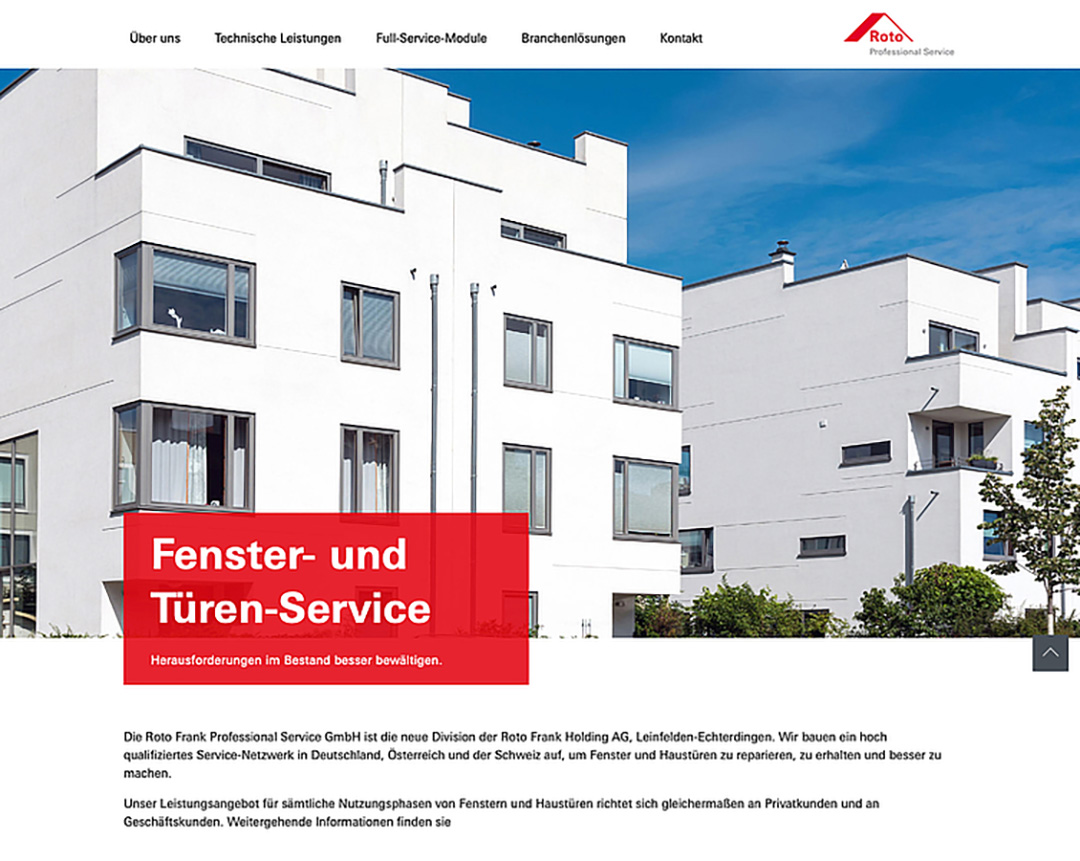 Bad Mergentheim / Leinfelden-Echterdingen – (rp) “Although 2019 was a year for working on the basics and becoming established, needless to say we also experienced business success. The results of the start-up phase fill us full of confidence for 2020, just like the realistic prospects.” That is Managing Director Dr Christian Faden’s summary of the activities at Roto Frank Professional Service GmbH (RPS) in mid-November 2019. The company, which offers an extensive range of services for follow-up care for windows and doors, represents the third independent unit in the Roto Group alongside the other two divisions – Window and Door Technology and Roof System Technology.

The construction supplier’s newest division has been pursuing a strategy of covering a wide range of requirements by offering maintenance, repair, modernisation, retrofitting and spare parts services, thereby preventing dependency on a demand segment. This strategy has already started to pay off, as is confirmed by the current situation in the German security market. With the decrease in the officially registered break-in figures by 41% from 2015 to 2018, private investments in modern security technology have also seen a significant drop according to information from RPS partner companies. They have even halved in some cases. Following minimal media coverage, this also relates to prevention. The industry therefore has to move away from the hope of having immediate, sure-fire success with burglary protection and instead concentrate on active communication, especially since statistics show that the number of crimes recorded in 2019 has continued to drop. What matters is, for example, addressing the urgent necessity for efficient measures, which remains unchanged from an objective point of view. During the 14th International Roto Trade Press Day in Bad Mergentheim (Germany), Faden also recognised the positive aspects of the market consolidation. It is putting a stop to the “gold-rush atmosphere” that is sometimes present and therefore ultimately plays into the hands of those companies with many years of expertise in security. This development is therefore bolstering the trend for better quality.

The Managing Director emphasised that the relevant market fields are otherwise experiencing “continued positive” growth. This applies to aspects such as the increasing maintenance requirements for windows as a result of the elements becoming ever larger and heavier. Significant potential has also been recognised in the final acceptance of new buildings. In such situations, window manufacturers frequently have to perform rectification work, for example hinge adjustment, despite the question of who bears liability for this not being clearly established. Especially for properties located a considerable distance from headquarters, RPS offers window manufacturers an economical solution for this. To sum up, Faden is truly impressed by the success of the group’s newest division. The year of 2019, where the company was just beginning to become established, already gives good reason to be optimistic.

“To create the required structures and establish the foundation for an efficient market campaign, it was first of all necessary to carry out a great deal of conceptual work,” emphasised the Managing Director. By way of example, he mentioned the integration of a standardised IT system, the drafting of marketing brochures and websites and the coordination of the network partners involved. To date, in Germany this has included the specialist companies Wollenberg GmbH (Berlin), Pfeil & Söhne Service GmbH (Munich) and Wiedemann Sicherheitsbeschläge GmbH (Hanover). With the recent acquisition of Wicklein Kundendienst GmbH, another metropolitan area is now also served by qualified staff. With its 13 employees, the Nuremberg-based company also covers the Fürth / Erlangen region.

In Switzerland, Dachfenster Helfenstein from Cham in the canton of Zug was another new addition. With its five employees, it was incorporated into Dachfenster Keller GmbH (Thalheim near Winterthur), which was acquired back in 2018.

As Faden explained, all companies recorded growing turnovers despite the contracting security market in 2019. For the year as a whole, he predicted an increase of around 20% compared to 2018 for RPS. It is clear from this figure that the diversity of the range of services on offer is paying off. The shortage of skilled labour that is typical of the industry is, in the meantime, showing no signs of abating, with not even groups of companies being spared. To fill vacancies, the company is increasingly turning to its own ranks by offering specific further training measures at the Roto Campus.

Expanding the network by adding ideal partners in metropolitan areas is, of course, still a priority. This does not, however, mean that we will compromise on the specified requirements profile. For this reason, the companies must always be large, experienced and well-established. “Quality takes priority over time,” is how Faden words the central acquisition principle. This principle is also being applied in ongoing negotiations with companies.

On the right track

In the B2B sector, RPS is primarily aimed at window and door manufacturers as traditional market partners. Specific cooperation agreements are already in place with some companies. This is a clear argument in favour of the new win-win idea and the well-founded reasoning behind it. The list of professional target groups also includes producers of prefabricated houses, the housing sector, insurance companies and building element dealers. In all cases, we established dialogue either directly or via the relevant networks. The entirely positive response and the openness towards the concept provided the hoped-for confirmation of the strategy the company adopted. Prospective customers can find detailed information about technical services and full service modules at the specialist portal www.roto-professional-service.de.

In contrast to this, www.service-friends.de is aimed at B2C target customers such as homeowners, landlords and tenants. The platform corresponds to the “Service Friends for Windows and Doors” word and design mark, which identifies the companies involved at local level as members of the network. The website clearly demonstrates their service package and makes it simpler for end consumers to provide feedback using a contact form. In 2020, there are plans to extend the activities to social media. Next year, work will focus particularly on establishing increasingly digitalised processes and solutions.

Spare parts: “a new approach and a new design”

At the headquarters of the Roof System Technology division, Faden then notified the specialist journalists who made the trip there of the launch of an online tool for finding and ordering spare parts. As a general rule, Roto guarantees that products will be available for up to 10 years after being discontinued. Faden firstly emphasised that 15 members of staff in the company alone take care of the resulting complete service, from identification and consultation, through to order processing.

True to the motto of “A new approach and a new design”, the company has now developed a tool for minimising sources of errors and for significantly speeding up and simplifying the complex processes involved. At the same time, this digital advance, which is the only one of its kind in the industry, is meeting customer demands that are growing specifically in this segment as well as in other sectors, calling for greater convenience, availability and customisation.

The spare parts finder which is installed and can be used at www.roto-spareparts.com offers a direct search function for an existing component number or, as an alternative, there is the option to identify the necessary spare part in a maximum of six search steps using example images. At the end of the process, the customer then receives an offer via e-mail with a link to the order form. Faden lists the other specific advantages as follows: selection of all materials and opening types, availability at all times, compatible with PCs, laptops, tablets and mobile phones and direct online ordering and payment.

The new “spare parts era” began at the beginning of November 2019 with the release of the German version for the Tilt&Turn (timber / PVC), Door and Equipment hardware product ranges. The gradual stages of expansion firstly cover the Sliding, aluminium, gasket and roof window product ranges and secondly extend to the Polish, English, Hungarian, French and Italian languages. Faden is expecting the “new major investment in even greater customer satisfaction” to be completed over the course of 2020 and therefore to be rolled out all over the world.